Jacked Up Brewery: If you brew it they will come 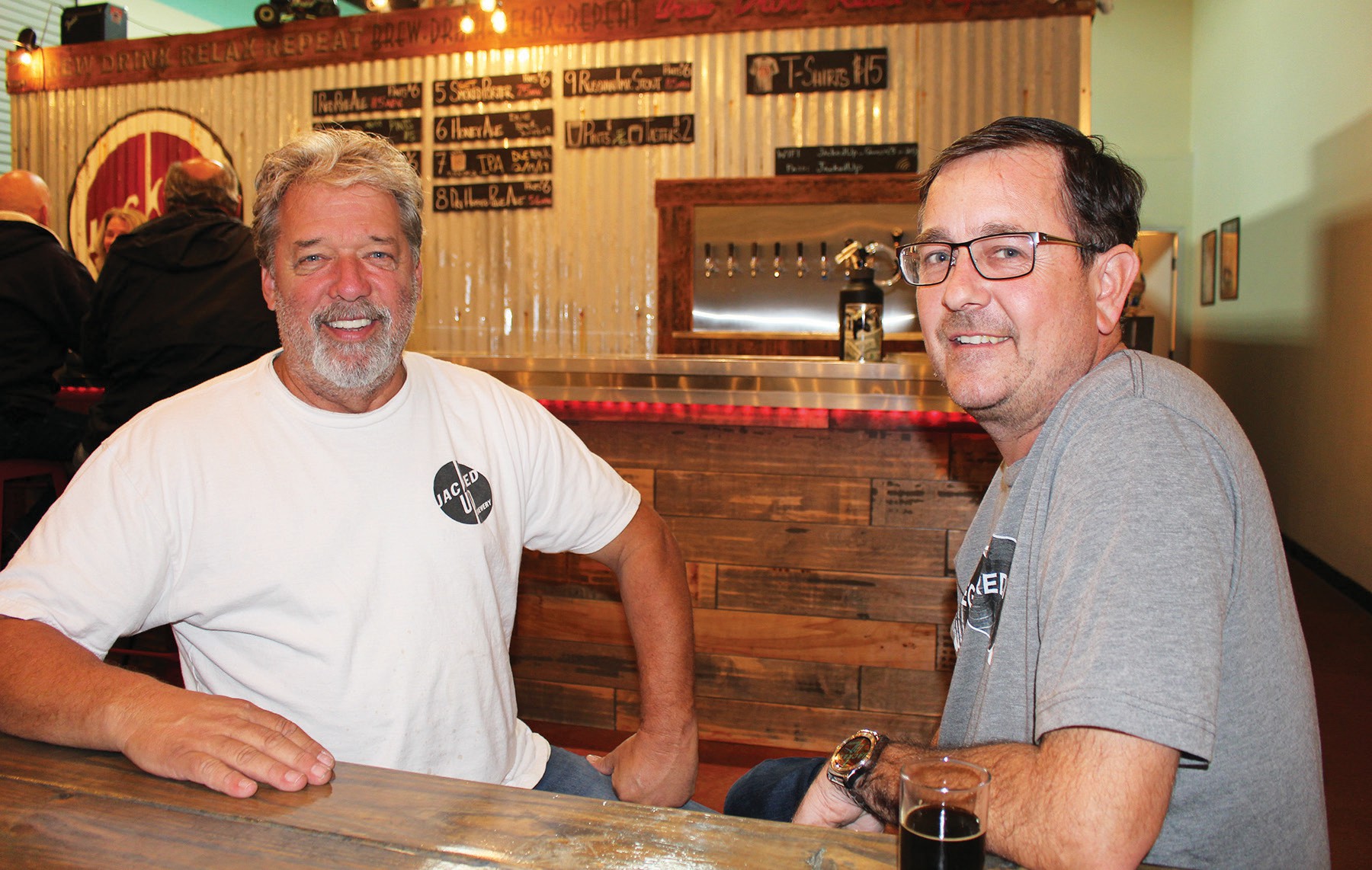 Brewmasters Mike Poulson and Brian McClure don’t push anything across the counter that they don’t enjoy themselves.

Mike Poulson and Brian McClure figure if they like the brews that they make, you will too. Judging from the reaction of patrons when I dropped by on a Friday night, that formula may be working out very well for them.

They have nine beers on tap, and if you ask them which one is their favorite, they will grin and say, “Pretty much all of them,” and “we brew them for our own pleasure.”

They make a variety that is about 50/50 darks, pale ales and IPAs and half lighter brews such as Honey Ale. This summer they will introduce Honey Lager. Just in case you’re wondering (I was,) honey ale and honey lager are not related to mead.

Poulson and McClure and their wives Caroline and Danielle are co-owners of the brewery. The project has been a while coming. They have been working with the city of Escondido since June of last year and finally got their approvals on December 15. Jacked Up is the third brewery to open in Escondido.

“Having several breweries is beneficial,” says Poulson. “The more breweries there are in town the more that visitors and residents will stay here when they want to go get a brew. And it will also be good for the city because more tourists will stay here and shop.”

Their philosophy is simple, “to keep real craft home brewing in town. We have to like it ourselves before we push it across the counter. It’s not mass produced,” says Poulson. Prices vary according to the complexities of the finished product.

They held a soft opening on January 1 and held a grand opening of sorts on January 28. On this Saturday, February 25, noon to 5 p.m. they will hold an “official” grand opening where the Chamber of Commerce and Mayor Sam Abed will attend to give a proper ribbon cutting.

Food will be provided by Kennedy’s Karne, which will serve nachos and combo plates.

The day before that they will celebrate “Vinyl Day,” when customers can bring their favorite vinyl records and they will play them.

The two men are longtime amateur brewmasters who decided to go pro after years of winning amateur brewing contests and having people tell them how much their enjoyed their brews.

McClure won first place at the Del Mar Fair for his Peanut Butter Stout and Best of Show in home brewing at the fair for his Belgian Quadruple. Now that their brewery is established they plan to start going after some of those professional ribbons.

So far, the reaction has been very positive. “We have a simple formula,” says Poulson, “ ‘Brew, drink, relax, repeat.’ ” Add to that “Good flavor, good times,” and “Keep it cold, keep it carbonated and keep it coming.” They admit that they sometimes dream of writing for Madison Avenue.

Eventually they plan to introduce a beer club that will be called “The Society of Jacked Up Individuals.” But that’s still in development.

If you think that these guys are overwhelmingly grim and serious. Think again. Nevertheless, the name: Jacked Up Brewery, has been somewhat controversial and requires some explanation. As Poulson explains it, finding a brewery name that hadn’t already been taken was “an arduous process.” “That’s one of the annoying things, that you have to come up with a name. After a while I said, ‘This is jacked up.’ So I went for it.”

Although they themselves like everything they sell, the Russian Imperial Stout is very popular and so are the IPAs and Pale Ales, with the Red Rye Ale right behind them.

Jacked up Brewery is very kid friendly and pet friendly. There are plenty of games for the little ones to play while their elders get foam on their lips. “We always have a water dish for the dogs and games for the kids,” says Poulson.

The guys are waiting patiently for Cruisin’ Grand to start in April. “Where we are situated, you can stop on the way in or on your way out,” says McClure.

Jacked Up Brewery is located at 800 W. Grand Ave., near the old Escondido Police Station. The building itself was once a law office. Hours are Monday – Friday, 3 p.m. – 8 p.m., Saturday, noon – 9 p.m. and Sunday noon – 8 p.m. They do not serve food. Because they don’t have a food license themselves they plan to draw on some of the city’s best food vendors, such as Rock n’ Jenny’s Italian Subs.

2 responses to “Jacked Up Brewery: If you brew it they will come”