It’s the smallest brewery ever, but probably not for long 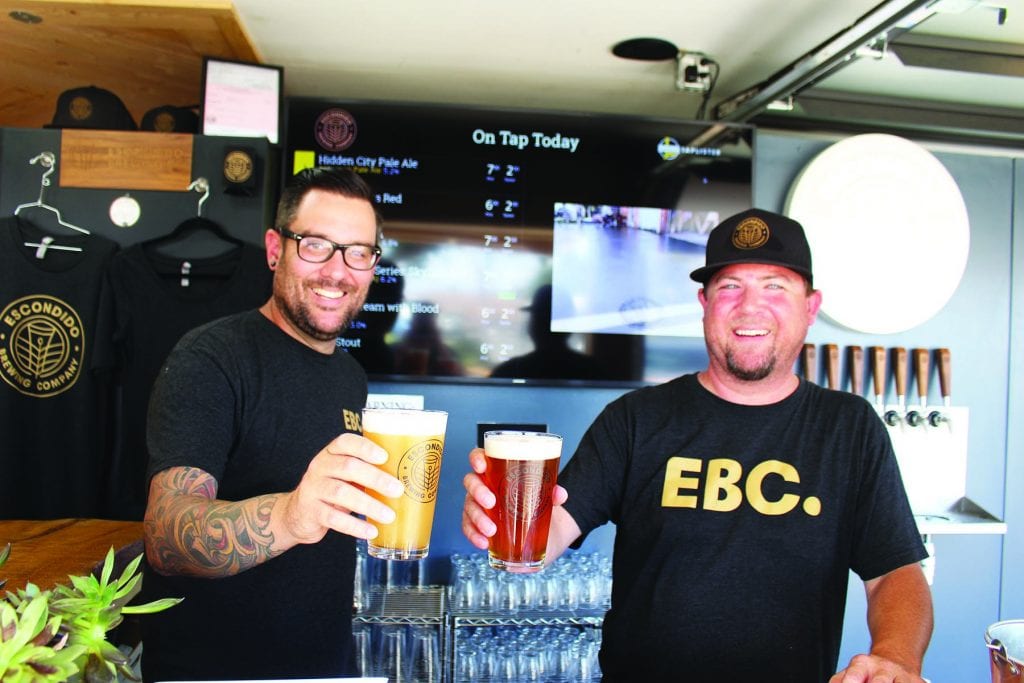 Evan Smith (left) and Ketchen Smith are “brothers in beer,” but not actually related by blood.

If the American dream is building a business from scratch with your hands, then Ketchen Smith and Evan Smith (who are not related except as “brothers in beer”) are living that dream.

You’ve heard of tiny houses? The Escondido Brewing Co. is a tiny brewery, with everything to do with the production of beer squeezed into 300 square feet. “The largest room is the restroom,” said Ketchen. “We are the smallest brewery around.”

Each Friday and Saturday afternoon when Ketchen and Evan get ready for business “it’s like opening a food truck,” said Ketchen. I visited them last weekend, which was the fourth they have been open.

What about Sunday? “Every Sunday we brew,” said Ketchen.

The rest of the week, Evan runs his family’s feed store and Ketchen is a product developer and engineer for a medical implants company.

I thought that Ketchen was an unusual, even a unique name, and asked about it.  “I was named after the sailing ship, the ‘ketch.’ ” he said. Were his parents sailing enthusiasts?  Not at all. “They were more like hippies who just wanted a different name because all of the men in my family had been named ‘William.’ ” He has decided to continue this new “tradition,” and named his 5-year-old Ketchen.

All of their beers have names related to Escondido, like “Hidden City Pale Ale,” “1888 Stout”—1888 is the year Escondido was founded; “Rock Springs Red,” after the street where they are located, “Grape Day IPA” and “Cruisin’ Cream,” which had juice from locally grown blood oranges added.

They have six brews on tap and would like to add a seventh tap. “That’s depending on the turnover,” said Ketchen. When your brewery is 300 SF, you are kept busy constantly to keep up with demand. 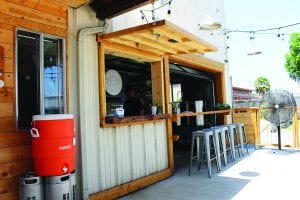 All of the seating at the Escondido Brewery is outside, since the inside is devoted to brewing.

Ketchen Smith is no neophyte when it comes to brewing beer. He has been brewing at home for 14 years and winning awards, some of them national awards, including a Best of Show in 2015 at the Props & Hops Craft Beer Festival in Palm Springs. This won him the opportunity to brew a 40-barrel batch of the winning recipe at the Coachella Valley Brewing Co. That is, of course, the Hidden City Pale Ale, which is currently the most popular brew they are pouring at their new operation.

“That’s pretty typical of San Diego,” said Ketchen. He added, “We can only do ales right now. My fermentation can only do one temperature at a time.” But eventually he hopes to add other types of beer.

Most recently he won a second place at the AHA (American Homebrewers Association) in a contest that 8,400 total entries and 436 in the IPA category that he competed in.

Evan Smith, who owns Escondido Feed, a business that has been in his family for 39 years, had some space available and offered his friend Ketchen that space. And then joined him in becoming partners in the business. Various friends and family members provided moral and monetary support along the way.

It took over a year of working with the city to meet their regulations. “We were determined and we did what they asked,” said Evan.

Ketchen is an engineer and Evan is a handy guy with a tool, so Ketchen provided the schematics and Evan built it all. Everything there, including the wooden picnic tables, Evan built. The only thing he didn’t build, he admits, was the plumbing!

“Ketchen is the guy with the talent,” said Evan.

Although these guys have big plans, including looking for a larger location, “Right now we’re just trying to keep up at this point, and brewing a barrel at a time,” Ketchen said.

They just started bringing in food trucks. On the day I visited them they hosted a cupcake food truck.  “We’re just getting into the rotation for the food trucks,” said Ketchen. “We are also looking into the possibility of working with some local restaurants to bring in some food.” 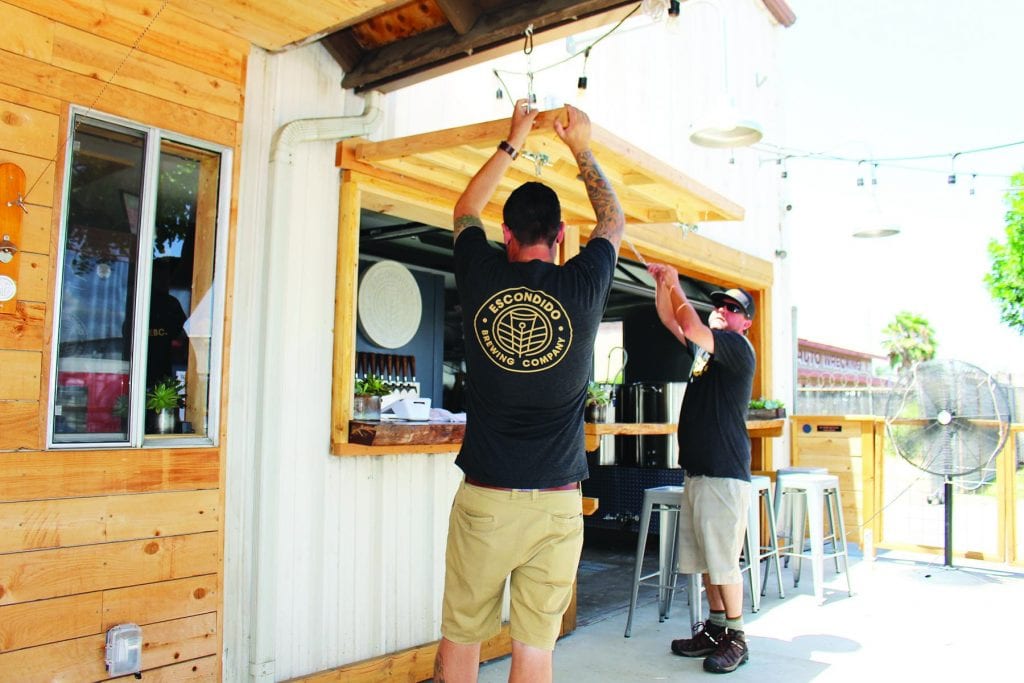 “It’s like opening a food truck,” says Ketchen Smith as he and Evan Smith get ready for the afternoon traffic at the Escondido Brewery.

Because they are still a small brewery, customers need to be patient with some things. Like, for instance, that they haven’t introduced “growlers” yet, although they plan to. “We’re just trying to keep up with the demand right now,” said Ketchen. “We are doing it on our own and it gives us a sense of accomplishment. And we can see on peoples’ faces why we did it. We have regulars—lots of locals. Even industry people who have dropped by.”

Speaking of which, they received a big assist from two area breweries, Rip Current in San Marcos and Burgeon Beer Co. in Carlsbad. Both helped the Smiths get their hands on some hard to find ingredients and talked to them about the process of getting through government regulations.

“They help us get to this point,” said Ketchen.

He added, “We ask ourselves, how can we do our part to make Escondido better. It’s a little funner. Beer IS fun!”

Meanwhile they are growing a little at a time and looking to see what their next step might be. But whatever they do, it seems likely they are not going to remain the smallest brewery around for too much longer.

Burger Bench will be the first local restaurant to carry them on tap. That should probably happen next month.  “We want to support local businesses any way we can,” said Ketchen.

Because they still work full time, they are only open Fridays, 4–8 p.m. and Saturdays, 2–8 p.m. They don’t have a phone right now, but you can find out more about them by visiting escobrewco.com or emailing your questions to cheers@escobrewco.com.