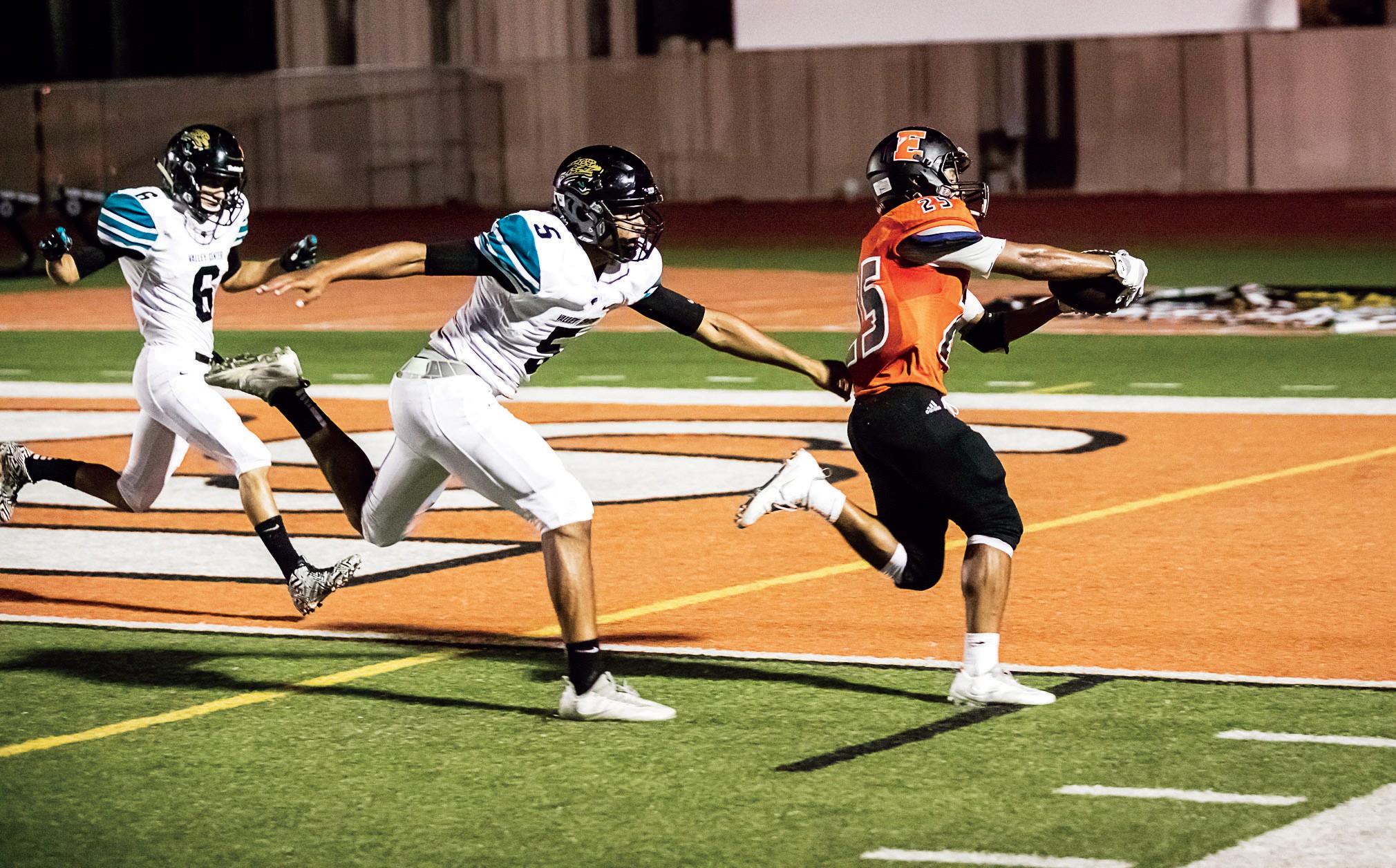 Scatback Taveous Vazquez stretches out for his second TD of the night. Photos by Lenny Kerbs of Kerbs Custom Photography

In an entertaining and intense game played Friday night on Escondido’s Chick Embrey Field, both the Valley Center Jaguars and the host Cougars proved something.

For the Jags, they once again demonstrated that, no matter what the circumstances, they simply know how to win football games. In the case of the Cougs, they showed themselves to be a plucky and competitive bunch that gamely keeps after it and refuses to go away.

But despite Escondido’s spirited effort, it was the rampaging Jags who emerged victorious by a final count of 28-21. With its eighth straight win, VC has now gone more than two months since suffering an opening-night loss to powerhouse Mater Dei. This key road win over Esco also ran the Jags’ ledger to a perfect 4-0 in league and secured for this incredibly consistent program yet another Valley title. That’s one hell of an accomplishment for a team considered by many to be too young for such an achievement.

Meanwhile, Esco saw its record slip to 2-7 overall and 1-2 in the Valley circuit but that mark is somewhat deceptive when one considers that the Cougs have dropped two games by just three points and had one taken from them by virtue of a forfeit (Serra).

This Jag triumph was greatly facilitated by a productive offense. Ever-maturing quarterback Rikki Mazzetti tossed for a pair of scores, speedy wideout Zach Mahrenholz pitched in with 149 receiving yards and beast-of-burden running back Ronnie McCowan, once more subbing for injured standout Daniel Belcher, was absolutely prolific on his way to a 34-carry, 226-yard, two-touchdown performance.

But VC was also the beneficiary of some distinguished defensive play as well. End Micah Wierenga was an absolute force with a sack and three tackles that resulted in a loss. His emerging brother Ben also contributed a sack and plenty of key stops. Linebacker Brock Moffitt was a constant presence as evidenced by his multiple tackles-for-loss and a noteworthy sack. Down in the pits, it was mainstay lineman Manny Perez who shone with a fumble recovery, a tackle-for-loss and by getting in on a couple of quarterback takedowns.

For the Cougars, signal-caller Kellen McCoy tossed for 239 yards and a score while making a number of remarkably accurate throws from distance. On the ground, it was the diminutive Taveous Vasquez who put his clever feet to good use while finding paydirt on two occasions, one coming on a virtual cross-country dash.

In addition, Escondido had its share of heroes on the defensive side. Linebackers David Parks and Johnathan Middleton were truly outstanding, combining for over 20 tackles and having their names continually called over the public address system. And sophomore Mason Malone was a revelation whether ringing up a sack, knocking down a pass attempt or simply sticking his nose in on a number of tackles.

The outcome of this tight contest wasn’t decided until very late when B.Wierenga generated great penetration and brought down McCoy on a fourth-down play that originated at the Esco 44-yard line. Once McCoy fell to the turf, it was basically lights out for the Cougars who had 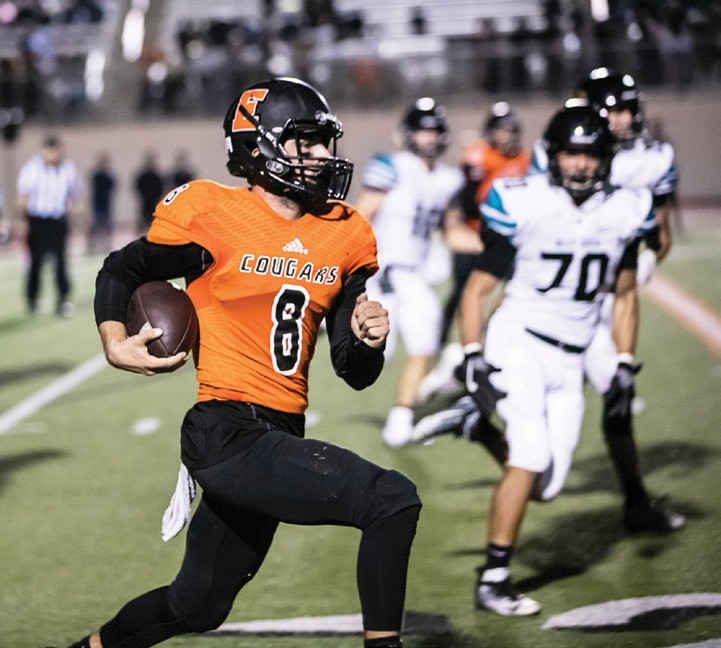 Cougar quarterback Kellen McCoy not only threw well but he was quite effective when forced to scramble. Photos by Lenny Kerbs of Kerbs Custom Photography

to endure a couple of Mazzetti kneel-downs that eventually brought the proceedings to an end.

Early on, things looked quite promising for the hosts. After sacking Mazzetti and recovering his ensuing fumble, the Cougars struck like lightning. On Esco’s second offensive play of the night and operating out of a power backfield, Vasquez took a direct snap from center. Flowing to his left before making a decisive cut inside, the fleet-footed senior showed a quick burst and lickety- split he was through the point of attack. And from there he was gone, demonstrating plenty of speed as he hustled down the left sideline, gradually drawing away from his pursuers. By the time he arrived in the end zone, Vasquez’s electrifying dash had covered some 72 yards. With a successful PAT, the Cougars were up 7-0 with just over five minutes having been played.

But as this season has unfolded, the Jags’ belief level has soared so there was a sense of calm along the VC sideline despite the initial deficit they faced. And on their third possession, the Jags provided their own thunderbolt. From the Esco 42, Mazzetti launched a deep spiraling bomb that was slightly under-thrown. And yet, that created little problem because the dynamic Mahrenholz was his target. After fighting off what looked to be an illegal hand-check, the junior receiver made a sweet comeback move on the ball and then clutched it to his chest before tumbling into the end zone. Thanks to Mahrenholz’s supreme concentration and a tack-on PAT, the score was now knotted up at 7-7 as the first period was about to expire.

The Jags would take a lead that they would never relinquish the very next time they possessed the ball. When the Cougars elected to go for it on fourth down and failed to convert, it gave the visitors primo field position and the Jags were quick to capitalize. Mazzetti promptly hit Mahrenholz on a nicely-executed sideline route for a big 17- yard gain. Two plays later, Mazzetti rolled to his left, surveyed the field and then drilled his reliable tight end Trevor Gurski, who had come free near the back line of the end zone. This 7-yard scoring pitch and another conversion had the Jags in front for the first time at 14-7.

And when the VC defense stopped the Cougars for a third straight time, the Jags were set to expand on their advantage. Five McCowan totes, in which he displayed both power and shiftiness, and a 16-yard connection to that man Mahrenholz had the Jags knocking on the door. Following a good surge off the left side, McCowan then plunged in from the 1 and at halftime the Jags were seemingly in control at 21-7.

That’s the way things remained until deep in the third quarter when the ball came loose from McCowan and the alert Parker Sandahl pounced on it. Immediately, McCoy went up top and gifted tight end Quinton Gaudet made an artful stretching grab that netted 32 yards. Shortly thereafter from the 3, McCoy pitched adroitly to a trailing Vasquez who 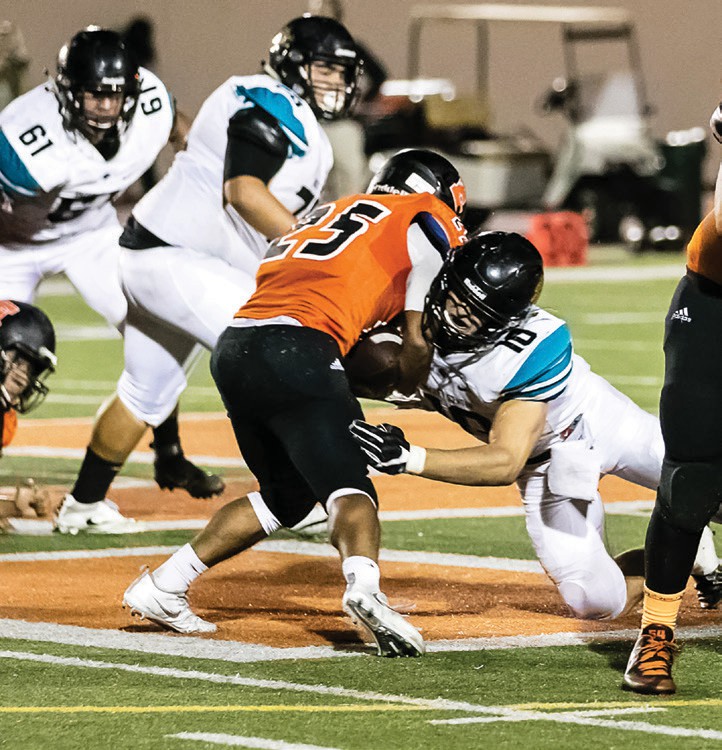 used his giddy-up to get to the outside before he squeezed inside the pylon. The ensuing kick was good and with just over a minute left in the third, things had narrowed considerably at 21-14.

But as they have done on so many occasions during the course of this season, the Jags offered up an immediate response. Taking over at their own 41, it would take the Jags just five plays to traverse the required distance. The signature 38-yard tally was authored by McCowan, who used a terrific burst of speed to find some space and then delivered a textbook stiff arm to break free from the last defender who posed a threat. As a result, the Jags once more owned a two-touchdown margin at 28-14.

However, the Cougars refused to fold and admirably kept right on competing. Fittingly, their perseverance was to be rewarded. As the clock continued to wind down, Esco began a 7-play, 55-yard march. The defining play was a thing of beauty as McCoy arched an accurate pass downfield that Cade Pannell reached up for and snatched on a magnificent effort. This pivotal link-up accounted for 34 yards and set the table for the capper. The now honed-in McCoy unleashed a tight spiral to wideout Miguel Rocha, who was all by his lonesome after running a slant-in pattern. The VC defense had obviously blown an assignment and that allowed Rocha to secure his 14-yard scoring catch completely unimpeded. The time that was left was a scant 2:41 but now the Cougars at least had a glimmer of hope at 28-21.

An Esco onside kick attempt was unsuccessful, however, when the good hands Moffitt covered up the bouncing ball. Nonetheless, the Cougs forced a turnover on downs when they stoned a fourth-and-one run by McCowan.

By taking over at their own 42, the Cougars had promising field position but McCoy was pressured into incompletions on the first two downs and a short connection to Rocha merely led to Esco’s final play, the aforementioned sack by B. Wierenga.

In the game’s aftermath, VC coach Rob Gilster commended his rivals to the south. “They fought really hard,” he praised. As for his team, though happy with the win, the coach thought it could have played tighter and with less mistakes. “Having an 8-1 record is pretty encouraging but we got a little loose in spots and we’re going to have to correct that going into the playoffs.”

Speaking of which, if the Jags can take care of business up on the “Hill” this Friday night against 6-3 Monte Vista, they will certainly receive a high seeding and earn a bye for the upcoming Division 3 postseason.

As for the Cougs, their regular season will culminate tomorrow evening when they square off against another neighboring rival, host San Pasqual. A victory there would be a most prized and coveted one since it would provide Esco with some real bragging rights.

As Friday night’s encountered showed, the VC Jags know quite a bit about the art of winning. It’s is the Cougars’ hope that soon they will be equipped with the very same knowledge.