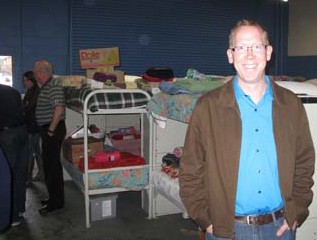 Interfaith Executive Director Greg An­glea showed off the newly remodeled 49-bed Haven House in December. The homeless shelter will be open all year and finding jobs and permanent hous­ing for residents.

Interfaith Community Services has been taking in homeless people for 35 years, but, up until now the shelter op­erated only during four winter months, December through March.

On Wednesday, March 30 the commu­nity services agency held a “Grand Un­closing Event” for Haven House, which will stay open throughout the year.

The shelter opened as the first one in North San Diego County to be open to both men and women on December 1 and underwent a remodel that brought the number of beds from 40 to 49 later that month.

“This is going to be the first year- round emergency shelter for the home­less in the history of North County that serves both men and women,” said Greg Anglea, executive director.

The year-round shelter has enrolled 72 clients since December 23 and 85 % of clients who have successfully exited the program obtained stable housing, according to a Haven House flier.

Interfaith’s mission statement is “Helping People Help Themselves” and Anglea says that means helping people with “a hand up instead of a hand-out.”

The shelter is funded for this year, having met $500,000 in costs, about $200,000 for the renovation and the rest for operating expenses, Anglea said. A team of fundraisers is working on getting $300,000 needed to meet next year’s expenses.

“The path toward ending homeless­ness is simple but difficult,” Anglea said. “It’s about creating an income, stabilizing life skills … that is really predicated on overcoming traumas that they have experienced while living on the streets. And, often it is a traumat­ic experience that led someone to be homeless in the first place.”

The need is great. According to San Diego’s Regional Task Force on the Homeless’s Point-in-Time count in 2015 volunteers spotted 430 homeless people of which of which 318 were in approved shelters and 112 were sleep­ing in cars, makeshift shelters or in the open in Escondido alone.

Escondido had 5% of the homeless in San Diego, according to the task force.

Anglea said the Point-in-Time count found around 1,600 homeless in the North County area, but North County agencies have joined in using another count.

Anglea said Interfaith launched a col­laborative project with the agencies that used a “pretty adept assessment” that lasts about 30 minutes.

“We have actually done those assess­ments on more than 1,200 individuals and households just in North County,” he said. “And we actually agreed to use one common assessment of every indi­vidual who is homeless.”

“So that is a much more reliable figure than any other metric out there because we’ve laid eyeballs on these 1,200 individuals, who they are, what their situation is and we know the re­sources that will be most effective for them.”

The 140 employees at Interfaith’s several branches offer a wide array of services for those seeking help. Oceans­ide branches offer social services and services to veterans. An office in Carls­bad offers employment services.

Everyone who lives at Haven House has a case manager and a social worker.