Interfaith helps the homeless get over the hump 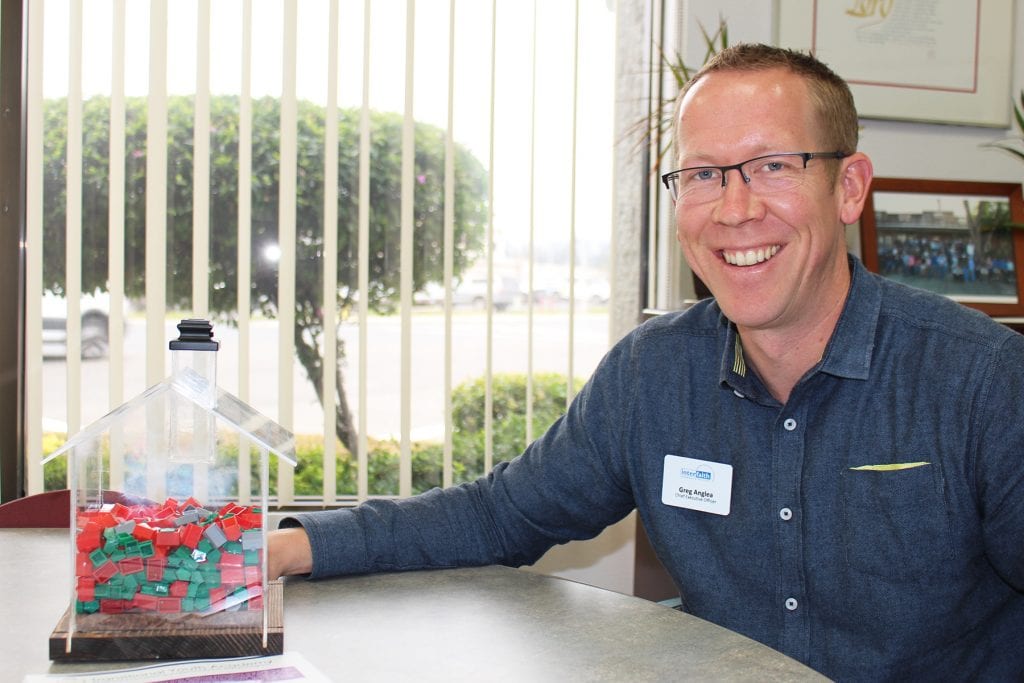 Greg Anglea, CEO of Interfaith Community, and a symbol of the Housing 1,000 program that is committed to finding homes for 1,000 men, women and children by the end of June 2018.

Walk into the Escondido headquarters of Interfaith Community Services on just about any weekday and you will see the true meaning of multi-tasking.

The Inland Service Center, located at the corner of Quince and Washington, one of the city’s busiest intersections, offers walk-in services. This makes sense: homeless people rarely have access to phones or the ability to make and keep appointments. Headquarters volunteers provide services for 30-50 families every morning.

CEO Greg Anglea (pronounced “angel”) prefers not to call those he helps, “the homeless,” but rather “the unsheltered.”

As Interfaith’s own mission statement says: “Interfaith Community Services empowers people in need to stabilize and improve their lives through comprehensive programs, in partnership with diverse faith communities and people of compassion.”

Anglea expects to see the newest statistics for the homeless population in April or May, but speculates, “It appears to be increasing.”  Interfaith recently conducted its own count for Escondido. “No doubt we are seeing an increase in visual street unsheltered people,” he says.

This compares to decreases in the national homeless population, with the exception of the metropolitan cities of the West Coast. This may be attributed to the higher cost of living and housing.

There appears to be a correlation between higher housing costs and increased homeless populations. This creates increased costs for entry level housing—and thus directly impacts homelessness.

San Diego County has about 10,000 homeless, according to the latest figures. In Escondido that number is about 500, of which half are unsheltered. The other half are in housing programs, such as the ones Interfaith put people into.

Another reason Anglea expects to see an increase in official figures is because of a “greater demand for food, employment and housing.”

A graduate of the University of California, San Diego in 2003, Anglea began working at Interfaith in 2006, when he joined as the Volunteer Coordinator and Faith Liaison. He served as Director of Development for five years.  In 2011, he moved to California State University San Marcos as the Director of Major Gifts, where he helped raise funds for college tuition for low-income, under-served youth.

Anglea returned to Interfaith as CEO in 2014.

Interfaith is in the midst of the Housing 1,000 campaign, whose goal is to move 1,000 people to housing by the end of June 2018. During the first eight months it found housing for 635 men, women and children. “We are confident we will get to one thousand,” he says.

Interworks with 18 housing programs and operates the only year-round shelter of its kind in North County for men and women. It is also the only homeless shelter in Escondido.

“Most people who are experiencing homelessness have had tough things going on in their lives. Most of them you would pass on the street without knowing they are unsheltered,” says Anglea.

Much of what Interfaith does is rent assistance. “It might be they can afford the rent but don’t have a first and last deposit,” he says. “A lot of those on the streets may have rent but have bad credit. We provide move in assistance and sometimes the first and last month’s payment. We help get them over the hump.”

Landlords know that when Interfaith vouches for someone they are a good risk.

Often families with children are the most desperate for housing. “Families with kids will do anything to keep off the street,” says Anglea. Sometimes they have enough money to live in a motel for three weeks out of the month, only to have to move to the street for that fourth week—all the while spending $2,000-$3,000 a month for rent. Money that if they had the first and last month’s deposit, would easily be enough to rent an apartment.

This situation is comparable to someone who borrows periodically from a “pay day” loan service—pays it back, and then immediately borrows it again.

How does a family get into such a situation? Often they are “the working poor.” They find themselves in a situation not of their own making. For example, the father got sick or hurt on the job and lost the ability to work for a while. Now the family is on the street because they are making half of what they used to make.

Another portion of the homeless have mental health issues. Resources for them are difficult to access, especially if they are diagnosed as “severe.” They make up perhaps 10% of the homeless total.

Someone with a mild or medium degree of mental illness can be treated at a Neighborhood Health Clinic. Severe cases do have ways of being treated, but often someone needs to establish trust with them and steer them to the right care, so they are willing to be treated.

Often someone who was successfully treated with medication before felt better, thought they were OK, and stopped their meds, thus falling back into the same situation.

“We have a free mental health clinician who will meet with anyone,” says Anglea. This individual builds trust and knows how to plug into the right program. “It takes relationship building for people who have mental illness or an addiction or someone who is self-medicating.”

Some percentage of the homeless can be said to correlate to Props. 47 and AB 109 that caused the release of some prison inmates into the general population. “I do believe this results in some increases in the homeless population,” says Anglea, “but I don’t think it amounts to more than twenty-five percent. Another twenty-three percent is from substance abuse.”

A more significant impact on the homeless population is made by people who get traffic tickets or other citations they pay, which propels them into a dangerous situation where they can’t afford rent. Interfaith can help get such tickets resolved, decreased or forgiven—as long as they can demonstrate to the court they are improving their situation. “Thousands of dollars have been forgiven in such cases,” says Anglea.

Characterizing large number of the homeless as “criminals,” who have been released into the general population “runs the risk of stereotyping our neighbors who are experiencing homelessness” and whose number one problem is that they have trouble paying the rent. “The cost of housing and low levels of income is a primary cause that we see.”

A key component with assisting the homeless is Interfaith’s excellent relationship with Escondido police. “We have a great partnership with the police and social services through their community policy (COPPS) program,” says Anglea. “I think the COPPS unit is fantastic!”

Later this month in partnership with COPPS, they will open a detox unit, a safe place in the same complex. This new facility will start with six beds for women and eight for men and slowly expand. It will join the existing Haven House, which has 49 beds.

In 2012 Interfaith opened Haven House as a temporary winter shelter. It soon became a year around shelter. It provides emergency housing for up to 49 homeless men and women each night. It focuses on providing services to those who already work, or are on-track to gain employment.

The next step is to transition into short-term housing. This program provides up to two years of housing for individuals and families. They get counseling and case-managed services whose goal is to help them regain stability and obtain permanent housing.

But each case is unique. “We had a couple that inherited a house in Philadelphia and didn’t know how to get there to claim their inheritance,” he recalls. Interfaith found a way to get them to their new home.

If you want to help Interfaith one of the most effective ways is to volunteer. Such as a one-time job like serving food. Another is to donate “good” furniture, except for mattresses, which Interfaith purchases new.

Household items are always welcome. “We will pick them up,” says Anglea. “But we only want quality items. If you would give it to a family member, then we’ll take it.”

Cash is ALWAYS welcome. Interfaith has a $13 million annual budget and with that pays a staff of 150, as well as training for its “professional” volunteers. These are persons like attorneys or tax preparers who volunteer their skills for free. They raise $4 million a year. The rest comes from government grants and rents from 100 units of housing that Interfaith owns.

This time of year, Interfaith tax preparer volunteers are filing tax returns for hundreds of people.

Finally: “We need people who know who we are and what we do, to send people to us for help,” says Anglea. There are no income requirements for meeting with someone and getting assistance.

For more information on Interfaith, visit their website at www.interfaithservices.org