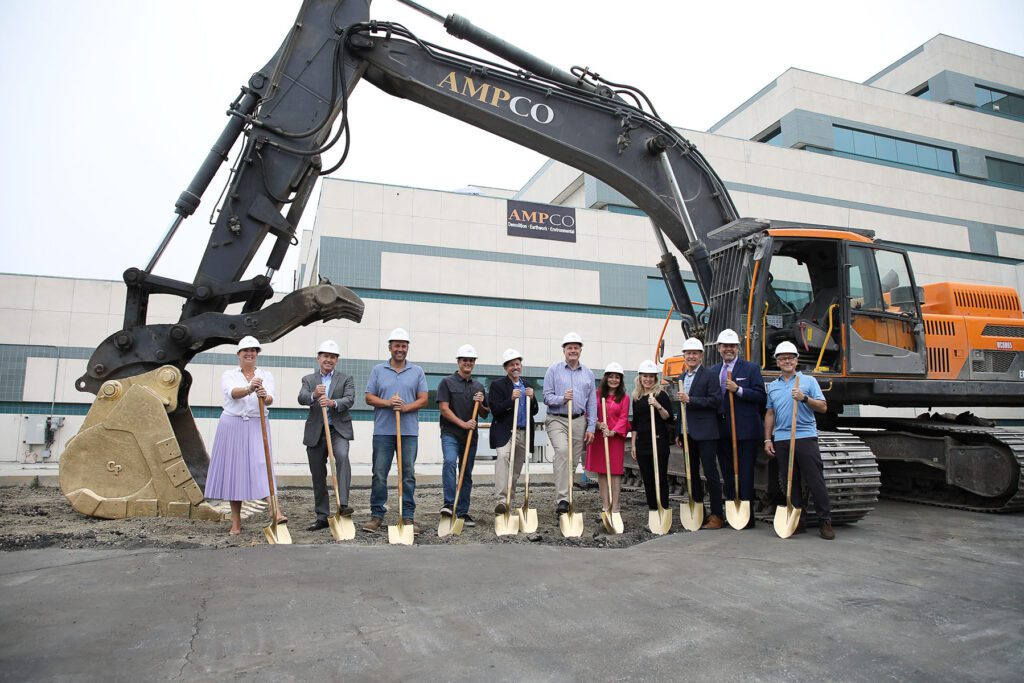 It also began tearing down the decommissioned Palomar Health Hospital downtown campus. Palomar Heights will include 258 multifamily rental residences, 162 for-sale townhomes and 90 age-targeted apartments. It will be anchored by a 75-foot landmark commercial building centered on Grand Avenue featuring a restaurant and sky lounge with 360-degree views of the city.

Escondido residents who grew up with the hospital tower as a constant landmark may be reminded of it by the new 75 foot Palomar Heights marquee Icon Tower, which will be visible from across the valley. The four-story building will feature a sky lounge restaurant and a rooftop bar with 360-degree views, as well as a retail farmers market, collaborative work spaces, and gym. Across the street on Grand Avenue, another cornerstone building will feature a breakfast café and secret garden.

Speaking Friday morning, Lance Waite, principal of Integral Communities, declared, “Palomar Heights will deliver a variety of housing types to meet the needs of a diverse population and bring new residents and liveliness to downtown Escondido.” He continued, “Aside from our new transit-oriented community, Rowan Apartments, which is located on the west end, there has been virtually no new housing built in the surrounding area for more than 15 years. We are replacing a site that has sat nearly vacant for more than half a decade with a vibrant mix of housing and commercial offerings that will benefit not only residents, but surrounding businesses and the city.”

At a recent meeting of the Downtown Business Association, merchants said they were excited about the economic multiplier of the 500-plus new households introduced into the heart of downtown. 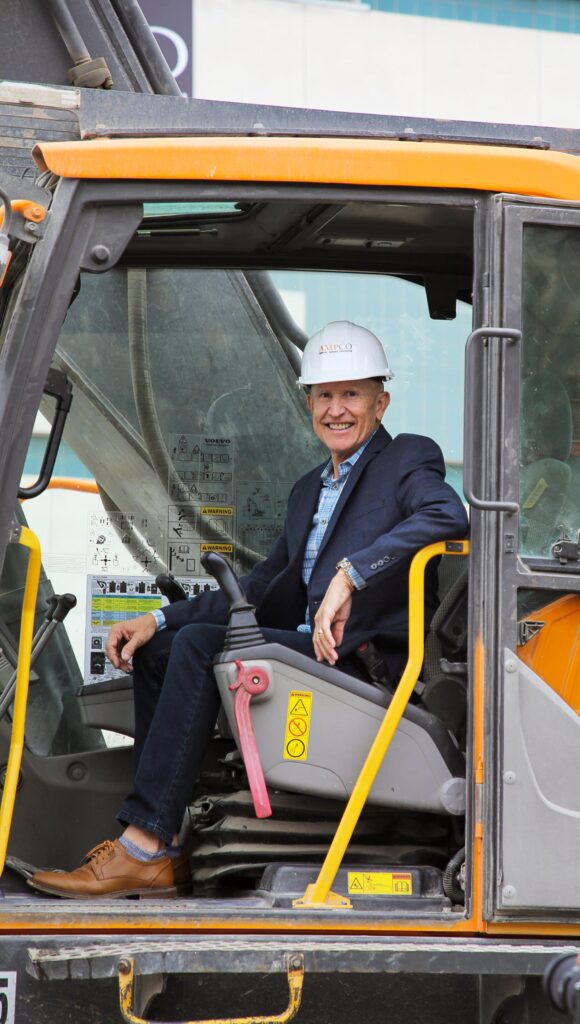 City councilmember Mike Morasco taking part in the demolition of the old Palomar Hospital by Integral Communities. He told The Times-Advocate he was thinking, “I would have loved to take that for a spin and start the demo!” Photo by Lenny Kerbs

Integral Communities says studies show Palomar Heights will generate nearly $800,000 in annual General Fund revenue for the city of Escondido. This provides an overall surplus – net of city costs – of more than $250,000 to the General Fund.

However, at the time council voted on the development, when Mayor Paul McNamara and Consuelo Martinez were in the minoring on approval, they had argued that by not requiring Integral to be part of a CFD (community facilities district) that the cost of maintaining its infrastructure will come out of the General Fund and so infrastructure costs were spread around to all the taxpayers. They also criticized the development for having no affordable housing.

“Palomar Heights is going to be a great start to the rebirth of Grand Avenue, which is so desperately needed,” said Jill Reilly, owner of Cute Cakes Bakery & Café in downtown Escondido. “It will not only utilize that central landmark spot anchoring one end of our main street, it will also bring new residents to enjoy, shop in and take pride in our city. You get more feet on the street and all businesses will benefit. I love that we’re going to have more people living at one end of our historic Grand Avenue.”

Designed by SummA Architecture, Palomar Heights will feature contemporary architecture with a modern art deco design style that pays homage to the historic architectural values of downtown Escondido, such as those incorporated at Escondido City Hall. 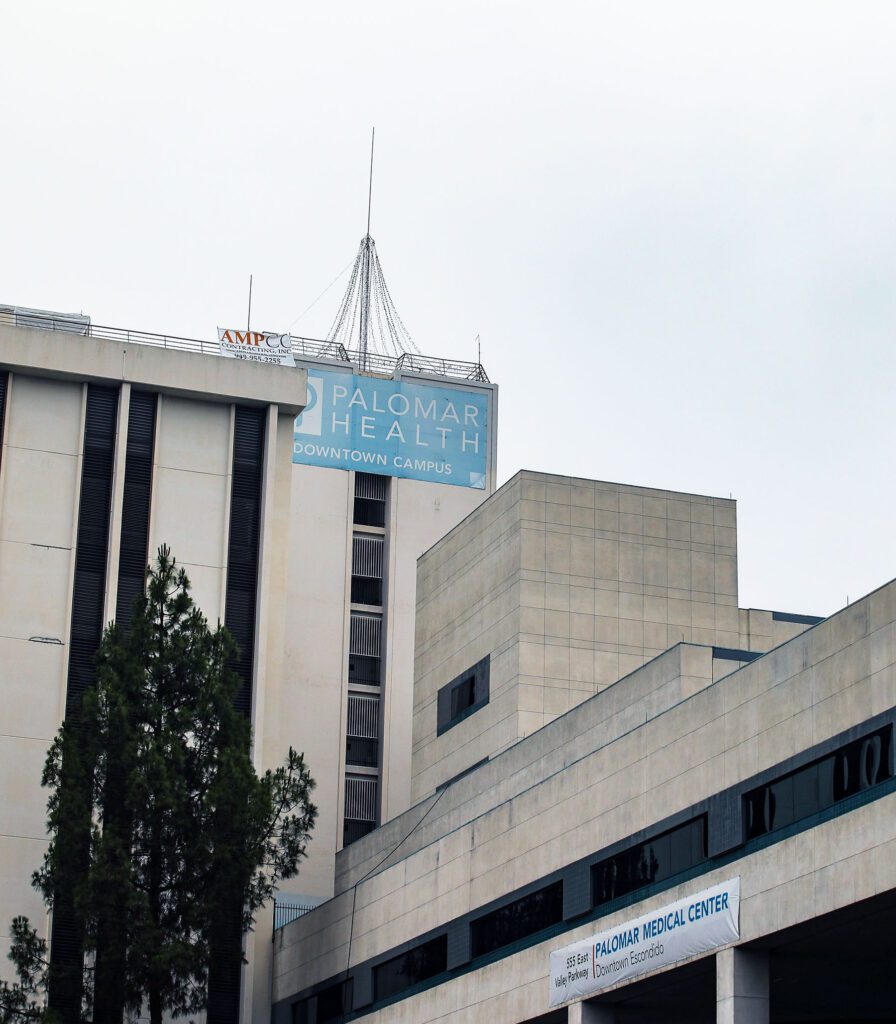 A last look at what was once the most prominent architectural element of Escondido’s skyline. Photo by Lenny Kerbs

“The project is designed to be an urban village within walking distance to downtown,” said Damian Taitano, principal at SummA Architecture. “The original city hall, with its art deco-like design, was the first building on site to be replaced by the hospital. We used key architectural elements from the original buildings to design Palomar Heights’ iconic tower as an homage to the site’s legacy.”

The development will include amenities such as a resort-style pool, a splash pad surrounded by lounge-style seating, a barbecue lookout and lounge area, gym facility, a dog park, and a public art installation. Plazas featuring local artist pieces will be located on the east and west corners of Grand Avenue and at the intersection of Valley Parkway and Valley Boulevard. The local artists will be chosen in the fall.

“The only thing that’s really missing from downtown is a major housing project because of existing high demand,” said Melissa Walker, owner and director of Distinction Gallery, located a block and a half from the development. “This project will be phenomenal because it’s going to be the final link needed to create the scenario where people live, work, shop and play downtown. That’s something so many of us business owners have been talking about and desiring for many years.” 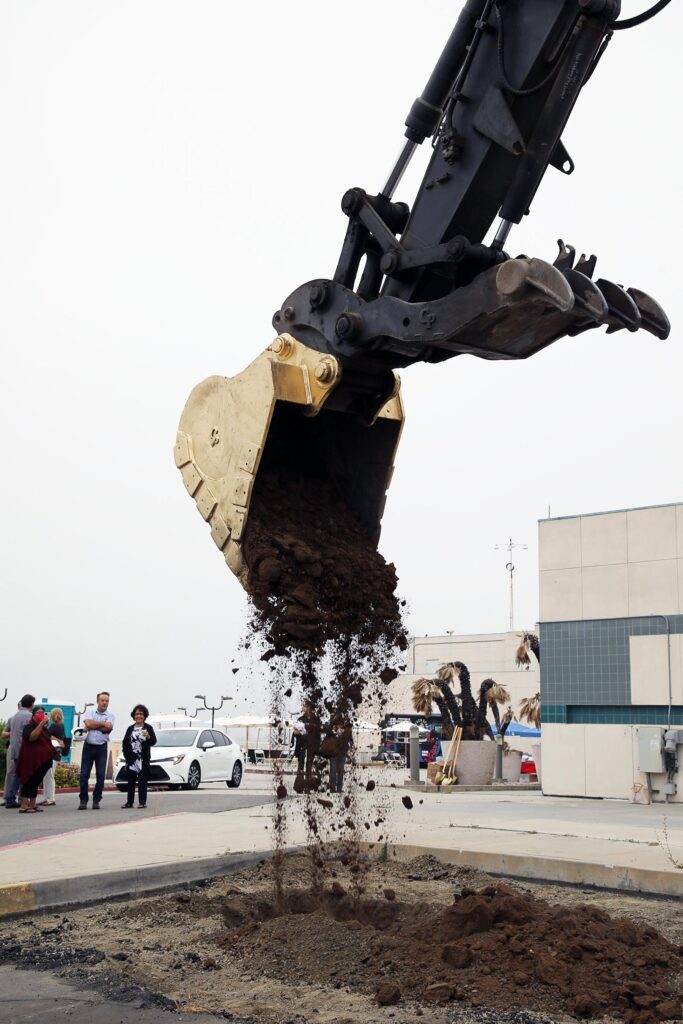 Downtown Business Association members Alex MacLachlan and Louisa Magoon watch the first shovelful of dirt lifted from the demolition site of the old Palomar Hospital. Magoon told The Times-Advocate: “I was feeling a little sad and excited at the same time. My granddaughter was born in that hospital six years ago. I have had friends who were nurses there who I’ve spoken to who are feeling nostalgic. I was thinking of the friends and family who I visited in the hospital. My daughter fell and cut her forehead and I rushed her to the ER for stitches. Lots of memories. But, I was also excited about the new project and what it will do for Escondido, especially our downtown. I think most business owners downtown are excited about the project and of course all the people who will be walking downtown to eat and shop. Plus, the project is beautiful and such a wonderful addition to our city. More excited than sad for sure!” Photo by Lenny Kerbs