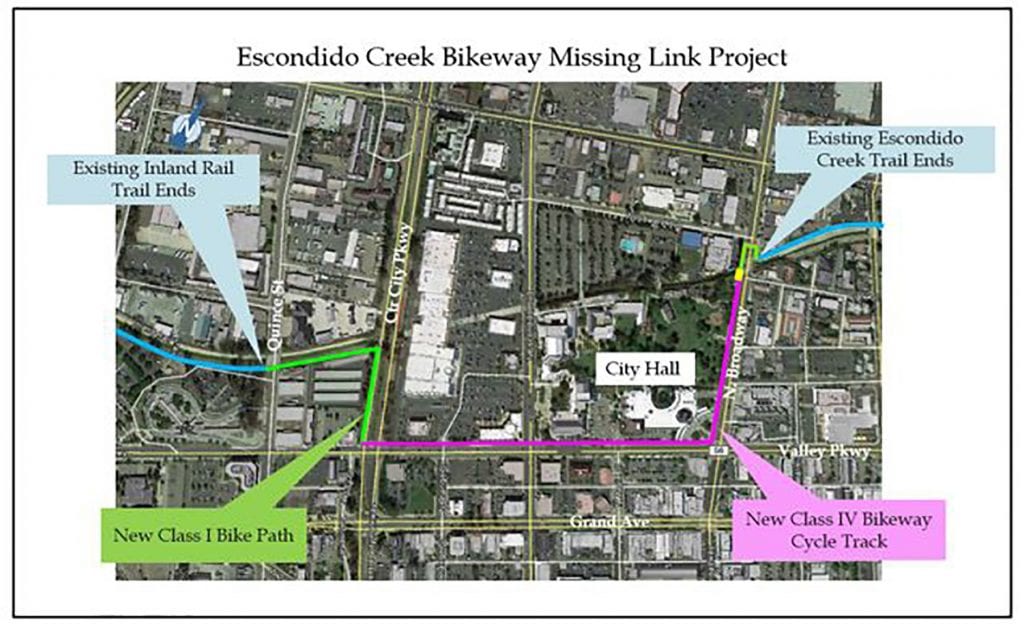 The city is moving forward with its Missing Link Bike Path that winds through the city. The progress can be seen with the installation of peculiar-looking green “bollards” along Valley Parkway, signaling areas where bikers can ride with a feeling of safety and peace of mind.

Bollards look unusual. It’s a unique traffic feature that separates vehicle traffic from the two-way bicycle path. According to the city “they are both durable and aesthetically pleasing.”

This month the city will see the completion of the bicycle bridge over the Escondido Creek and paving of the bikeway along the Escondido Creek between Quince and Centre City Parkway. It will also install new signals along Broadway at Woodward and linking Grape Day Park to the Children’s Museum.

As the name “Missing Link” would imply the purpose of the project is to fill an existing gap between the Escondido Creek Trail on N. Broadway and the Inland Rail Trail on Quince Street by constructing new bike facilities through the core city area.

A Class IV bikeway is a facility that is for the exclusive use of bicycles and is physically separated from motored traffic with a vertical feature. The separation may include flexible posts, inflexible barriers, or on-street parking. Along Broadway the slanted parking spaces next to Grape Day Park creates a barrier between the bike lane and the car lane.  Along Valley Parkway, adjacent to City Hall, the “bollards” separate the bike lane from the car lane.

The purpose of  Class IV bikeways can reduce the level of stress, improve comfort for more types of bicyclists, and contribute to an increase in bicycle volumes and mode share.

The project is scheduled to be completed by early 2019. 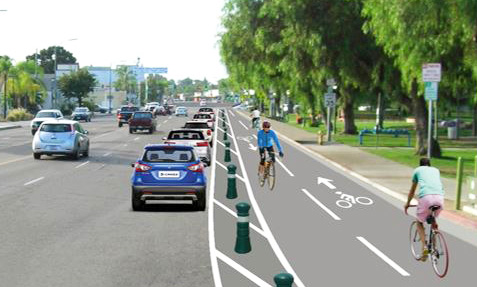 Illustration shows how the bike lane is separated from the automobile lane by parking.

The phones are ringing for Steve Waldron: Cruisin’ is coming!Local firefighters to ask residents to ‘Fill the Boot’Escondido area veterans observe Memorial Day