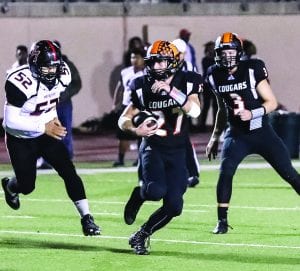 The record will show that on a crisp November 10 night at Wilson Stadium, the Mt. Miguel Matadors bested hometown Escondido High by a count of 27-18 in a first-round Division III matchup.

Yes, there was no denying that the three rushing touchdowns scored by Matador workhorse running back Shemar Greene were a major factor in the ultimate outcome. But the visitors also got a huge assist from a rather unexpected and capricious source – namely attrition, which came in the form of impactful injuries to key Cougar personnel.

In almost any instance you can imagine, attrition is never a good thing. And in a football game, it spells not only trouble but dramatically affects a team’s ability to compete and prevail.

Unfortunately, Esco lived that reality on Friday night. The Cougs watched as their starting quarterback, center, tight end and strong safety were all eliminated by injury. And though the team gamely soldiered on and got gallant effort from the replacements being thrust into action, the loss of so many frontline players couldn’t be overcome.

“The injuries were definitely a factor,” said Esco head coach Jud Bordman, not in an attempt to make excuses but in a very honest appraisal of the facts. “But I was really proud of the way we continued to play hard and fought right down to the very last minute.”

With the victory, the Matadors (5-6) will now advance to the quarterfinal round where they will meet a true heavyweight in undefeated Southwest El Centro (10-0). As for the Cougars, their season comes to an end with a 4-7 record but plenty of progress was made during a year in which they doubled their win total from 2016 and made significant inroads towards Bordman’s burning ambition of returning the program to a place of prominence.

In the early going on Friday and while they had a full complement of players at their disposal, things were looking as bright for the Cougs as the illuminating lights that lit up the turf on Chick Embrey Field.

Esco was to get on the scoreboard first thanks to a safety of rather uncommon origin. After an errant snap was airmailed way over the head of punter/aforementioned Shemar Greene, the hurried Matador was forced to retreat into the MM end zone to retrieve it. While running along the back line and in his haste to get off a desperation kick, Greene inadvertently stepped out of bounds and with that miscue the Cougars went on top by a count of 2-0 with 6:06 left in the first quarter. 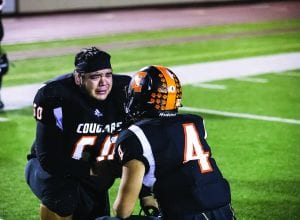 And then with less than three minutes gone in the second stanza, the Cougs would expand on that lead, thanks to an impressive 90-yard march. The signature play of this advance was a nifty 59-yard tote by hustling back Jake Frankfather in which he demonstrated a quick burst, splendid vision and real acceleration. It was then left to freshman signal-caller Robert Ramos to help finish things off. After executing a convincing play fake, Ramos lofted a beautiful touch pass into the right flat to Josh Cabarle, who made a nice reaching grab before striding into the end zone with a 10-yard touchdown reception. When Luis Flores tacked on the PAT, the Cougs were coming on and definitely had momentum swinging their way.

But momentum can be a fickle mistress and in a flash, she had switched sides. The entire tenor of the game was about to abruptly change.

In an aggressive effort to seize control of the game and hoping to catch the Matadors unawares, the Cougars attempted an outside kick. If successful, Esco would really have had a leg up on the proceedings but alas, the bold ploy backfired.

The bouncing kick hopped right into the hands of Ulices Monje, who was positioned on the frontline of MM’s kickoff return unit. After nimbly ducking to avoid a would-be tackler and with the entire Esco team having surged past him, Monje had nothing but a vast expanse of virgin turf staring him in the face. Showing more than enough speed to get the job done, he rumbled down the right sideline for a stunning 52 yard, game-changing TD.

Matters got even more dismaying for the locals on the ensuing MM squib kick when the Cougars couldn’t get a handle on it and the Matadors were quick to make a pivotal recovery. Now it was the visitors who were feeling it and they took full advantage. Five plays later from the 13-yard line, the physical Greene bolted up the middle, veered to his left and was never headed. In just a mere 2:27, the Matadors had gone from being scoreless and struggling to owning a 13-9 margin.

It was shortly thereafter that the rash of Cougar injuries started to crop up. After he had handed the ball off to Frankfather, QB Ramos crumbled to the turf and stayed there for a fair amount of time. He was able to hobble off the field with assistance but the youngster was done for the night – the victim of an ankle injury. Ramos would spend most of second half along the sideline, propped up by a pair of crutches.

But Esco hung tough and on their final possession before intermission, despite having a touchdown pass called back and losing the services of dependable offensive lineman Ricardo Cervantes Jr., Flores provided his team with a measure of solace with a low, hooking 33-yard field goal that drew the hosts to within one at 13-12.

And that’s the way matters remained until late in the third stanza when Greene made like Atlas and hoisted his team upon his ample shoulders. On a telling 96-yard march, the tireless senior carried the ball eight times, turned a pretty sweep into a 24-yard gain and then hauled in a sweet sideline spiral from quarterback Mugabe Miller for another huge pickup (36 yards). Understandably, the Matadors kept feeding the beast and Greene was more than willing to provide the capper, a short plunge from a yard out.  With the tally now 20-12, MM had created a bit 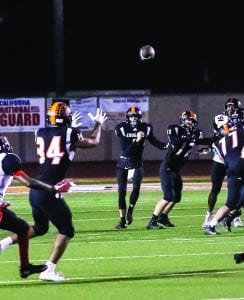 of space for itself.

However, that cushion would be narrowed considerably on Esco’s first series of the final quarter. Backup QB Justin Fox, forced to deal with a balky hamstring himself, starting seeking out the versatile Quinton Gaudet, who up to that point had already been a headliner with an absolutely dominant performance on defense.

Fox zipped a pair of well-thrown slants to Gaudet, who exhibited his considerable power by bulling his way to additional yards after each catch. These two connections resulted in 34 yards and that set the stage for an Esco payoff when Fox drilled wideout Shawn Moskowitz on a sharp 11-yard hookup. Now within two (20-18) with just over eight minutes left in the contest, the Cougs went for the tying 2-point conversion but Fox’s toss was just a tad too low for a diving Gaudet to corral. No one knew it at the time but Cougars were destined to draw no closer.

Though their lead had been whittled down, the Matadors didn’t flinch and they basically put things away with a time-consuming 66-yard assault that chewed up 4:18 on the clock. Again it was Greene (141 yards) that did the lion’s share of the damage, his third and culminating tally coming on a 23-yard scamper in which he busted off tackle, got loose and then made a beeline down the sideline. At 27-18, Mt. Miguel was close to putting this one in the refrigerator.

The Cougs had one valiant gasp left but when Flores’s late 37-yard field goal attempt came up short and to the right, their hopes for a miracle finish were over and all that remained was for the victorious Matadors to run out the clock and then celebrate.

The Esco defense had been particularly gutsy in defeat with five players recording at least five total tackles. Down lineman Jose Martinez was a definite standout, disrupting things inside while being responsible for at least two tackles for loss.

However, the defender casting the longest shadow was undoubtedly Gaudet, a truly special talent who appeared to be all over the field. Unofficially credited with a minimum of 13 total tackles, three tackles for loss and a sack, the outgoing senior produced a performance that will long be remembered by those Cougar fans who witnessed it. “Gaudet was just phenomenal and played like a true champion,” praised Bordman. “In so many ways, he’s been the cornerstone of our team the entire season. All year long he’s showed his teammates how to fight, be determined and to stay with it no matter what. And they followed his example. There’s absolutely no doubt in my mind that he can play at the next level.”

One other departing senior certainly deserving of mention is Kevin Rodriguez, a bruising and gifted back when healthy. On his way to a spectacular season and in the midst of putting up some really prolific numbers, Rodriquez suffered a leg injury that caused him to miss a significant portion of the campaign. He healed well enough to see some spot duty in Esco’s final two games but deprived of the ability to fully push off and accelerate, he was a player playing at less than his maximum. One can only speculate as to the difference he would have made in the Mt. Miguel game had he been 100 % but those within the Cougar program justifiably feel it would have been substantial. 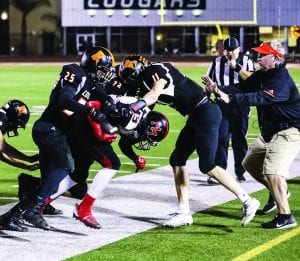 And so the curtain falls on the Escondido season. But with a young and promising corps of skill position players returning next year, Bordman sees the Cougars continuing to progress and build on what’s taken place over the last two seasons. Moreover, he likes the mindset that’s being established. “I’m a blue-collar guy and our team is really starting to reflect that mentality,” the coach reveals. “We’ve got a bunch of kids who are going to sweat, work hard and fight for each other.”

Based on that assessment, look for the Cougars to step it up even more in the years to come.