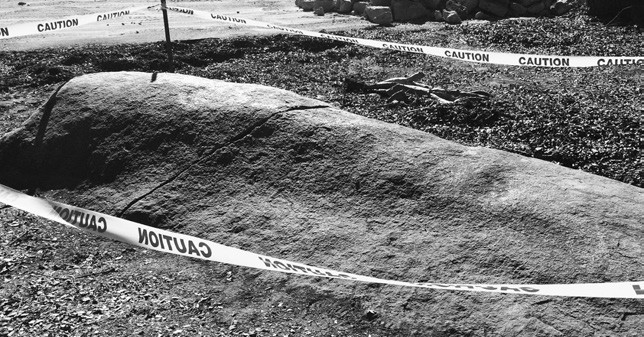 A boulder with prehistoric Indian carvings has been found at the site of the school district’s sports field project on Cole Grade Road.

During the course of converting the old CCC barracks into a sports field, workers employed by the Valley Center Pauma Unified School District recently uncovered an historic artifact hundreds if not thousands of years old.

At Thursday’s school board meeting trustee voted to approve of a $9,967 change order that was mandated by the discovery of the ancient stone which has several prehistoric rock art of area Indian tribes.

The environmental impact report for this project required anarchaeological monitor and Indian monitors to be present for all ground-disturbing activities due to the potential to uncover cultural resources. That’s when the prehistoric rock art was discovered.

The rock art consists of two natural inclusions in a granite boulder that were enhanced through rock engraving by prehistoric people. According to the district, “Archaeologists have interpreted similar art, which is relatively rare, as ritual in nature, representing a portal between the natural and supernatural worlds for prehistoric peoples.”

The district consulted with members of eight Luiseño and Mission Indian tribes on the best way to preserve the artifact. On their advice the boulder will be left in place and the sports field will be relocated 14 feet south of it. This will require removing some trees.

The archaeological find will be formally recorded in the State of California’s cultural resource database for compliance with CEQA.

This is the same land that was the subject of a lawsuit by the CCC Interest Group, which unsuccessfully sued to try to force the district to erect a monument to the old Civilian Conservation Corps barracks that was built there during the Great Depression.