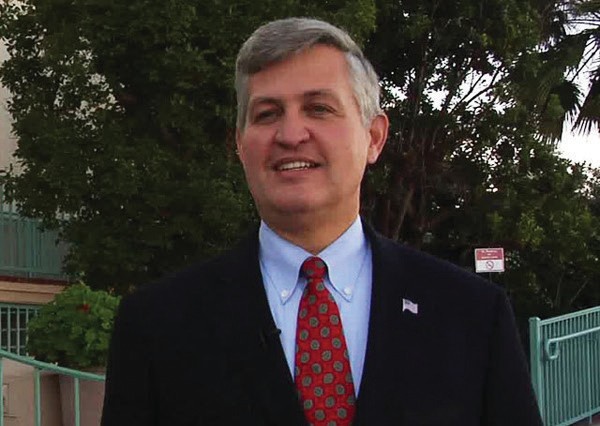 Dave Roberts, 3rd District Supervi­sor, has been called the energizer who gives the Energizer Bunny lessons. If you look at his schedule you might be convinced that he has an identical twin.

Look at his Fitbit and you’ll find a man who logs in sometimes 12,000 steps a day, possibly leaving the Ener­gizer Bunny in his dust. He gets up at 4:30 each day and walks 5,000 of those steps before breakfast.

You’ll find him constantly on the move, meeting with constituents, with other public officials, even delivering meals on wheels to seniors. He often has a dozen meetings a day on his schedule.

“I have a very high passion and en­ergy level,” he said.

Recently a group of supporters who included Escondido Republicans, held a reception for him in which they re­marked that they liked their mayor, Sam Abed, a Republican and liked their 3rd District Supervisor, Dave Roberts, a Democrat, and wanted to keep both in their current jobs for the moment.

“We don’t see you as a Republican or a Democrat, we want you to stay as supervisor,” they told him.

Roberts, who has been on the board for three and a half years, is in a tough reelection campaign. Challeng­ers Abed and Encinitas Mayor Kristin Gaspar both smell blood in the wa­ter due to the embarrassing situation where Roberts’ fellow board members voted to pay $310,000 in “hostile work environment” claims by three ex-em­ployees. His fellow supervisors issued a statement criticizing their colleague for “a hostile work environment, an alleged bribe, campaigning on county time, improper use of a county vehicle, and retaliation against District 3 staff members.”

Roberts, when asked to comment about these issues, told The Times- Advocate: “Last year I had personnel issues in my office. I took responsibil­ity for those issues and took action to resolve them. I am running for reelec­tion because we are providing real so­lutions to solving real problems.”

He adds, “I think this election will be decided on how each candidate ad­dresses the issues. Voters want clean air, clean water, parks, trails and open spaces and a fiscally responsible gov­ernment that solves problems.”

He points to the fact that San Diego County is one of 3,089 counties in the U.S., of which only six have a Triple AAA credit rating. “We first achieved that in 2013, the year I joined the board and we just achieved that again for 2016. My colleagues and I are fis­cally responsible with the taxpayers’ dollars,” he said.

He points to the special attention that he has paid to the city of Escon­dido, “working collaboratively with the Chamber of Commerce and non- profits to solve Escondido problems.”

He is working with the city on a city- county collaboration to bring about El Caballo Park, a park that would be lo­cated at 3410 Valley Center Rd. It is adjacent to Daley Ranch, the Escon­dido Humane Society, The Escondido Water Treatment plant, the Eureka Springs development, and East Valley Parkway.

“We are going to build a park with trails for hiking and horseback riding. I have been working on what kind of park it will be. This park would be a great asset for Escondido and the whole region,” he said.

Parks and open spaces are his pas­sion. Last year he was at a dedication of improvements at Escondido’s Fe­licita Park, where the County added amenities to make it attractive as a wedding venue. “When I first became a supervisor they asked me for a list of projects that enhanced the quality of life. That was one that we identified,” he said.

Noting that he has about 650,000 people and many communities in his district, Roberts is constantly work­ing with those communities to build amenities and expand open space. He points to projects in Rancho Bernardo, Mira Mesa, Encinitas, etc. where he has been involved in creating parks or helping to save them.

He considers one of his biggest suc­cess stories the extension last April by another 50 years of the 25-year mul­tiagency joint powers agreement (JPA) between the County and the cities along the San Dieguito River Valley. The land extends from the beach in Del Mar to where the river is born on Volcan Mountain in Julian. The park has 65 miles of trails, including the yet to be completed Coast to Crest Trail. Roberts represents the Board of Super­visors on the JPA board.

“When the 1989 agreement expired San Diego pulled out,” said Roberts. “I got them to agree to a fifty year exten­sion. Some people refer to that park as the Yosemite of Southern California. We are extending miles of trails. The goal is to extend the whole trail system so that you can go from one end of the county to the other.”

Another success story has been Rob­erts’s promotion of programs, such as HERO (Home Energy Renovation Op­portunity) a PACE (Property Assessed Clean Energy) financing program, the county makes available to provide home­owners the means to buy and install energy efficient and water saving up­grades.

The Board of Supervisor’s 2014 ap­proval of HERO was spearheaded by Roberts and Dianne Jacob when she was board president. In fact, bringing a residential PACE Program to San Di­ego was one issue that motivated Rob­erts to run for office.

Roberts notes that many homeown­ers are able to spread their payments for these upgrades over 20 years. He cred­its PACE with helping to reduce green­house gases and creating jobs “This alone has created 5,000 new jobs and hundreds of millions of dollars of eco­nomic activity in our county,” he said.

A completely different kind of PACE (Purchase of Agricultural Conservation Easement) program that Roberts and Ja­cob helped initiate promotes long term preservation of agriculture in the Coun­ty through the purchase of develop­ment rights from willing owners. Farm owners are compensated for putting a permanent open space easement on the their ag property that limits future uses and prevents future development.

“This became part of the County’s General Plan,” said Roberts. “So far we have set aside 1,200 acres. Every year we call for interested sellers. If they promise to remain undeveloped we pay them a fee. This preserves open space.”

He also worked with San Diego Mayor Kevin L. Faulconer to reestab­lish this county as a preferred venue for filmmakers by creating a Film Of­fice for San Diego County. “The film industry was once a major industry in San Diego but it was largely shut down” due to regulatory issues, he said. Filmmakers approached Roberts to fix this problem and he was happy to lend his support. He expects the film office to open this year.

“One reason that Bill likes working with me and I like working with him is that I put an emphasis on Escondido,” said Roberts. He notes that this is the first time ever that a supervisor has opened a community office in Escondido (lo­cated at the Escondido Chamber of Commerce office at 720 N Broadway).

“My greatest success in the district and in Escondido has been saving the Palomar Forensic Health Center that is run by Palomar Health.” He was asked to prevent the closure of the center, which provides compassionate care for vic­tims of rape and domestic abuse and also collects DNA for prosecution.

“We held a meeting and we all agreed to keep it open,” he said. Soon they will be holding a ribbon cutting for a new location for the center.

This points to Roberts’s strong suit, and another factor that got him to run for the Board of Supervisors in the first place, his coalition building.

Roberts compares his own experi­ence in government to his opponents. “I’m the only candidate with an MA in financial management. I’ve worked at all levels of government.” He worked for both the Bush and Obama admin­istrations in the Department of Health & Human Services. He was an aide to U.S. Senator Lowell Weicker and worked for the House of Representa­tives Appropriations Committee. “I had a role in creating the TRICARE Military Healthcare system,” he re­calls.

In November Roberts was elected first vice president of the California State Assn. of Counties and will be­come its president this November after re-election. “In this job I will be able to promote the San Diego success story,” he said. In that role he has met with Governor Jerry Brown and discussed San Diego is­sues. He was also elected to the Na­tional Assn. of Counties, one of two supervisors from California. “I’m so pleased to represent the county of San Diego at the state and federal levels. I look forward to helping set the advo­cacy agenda for our county and others across the state and nation,” he said.

In this function he just met with U.S. Senator Dianne Feinstein to discuss is­sues relating to San Diego.

Roberts, who has six foster children, was prompted to enter politics because he wanted to make it easier for peo­ple interested in adopting foster chil­dren to maneuver through the system. “When I saw how hard it was to deal with the county system if you were a foster parent I wanted to do something about it,” he recalls.

He’s been involved in politics ever since.