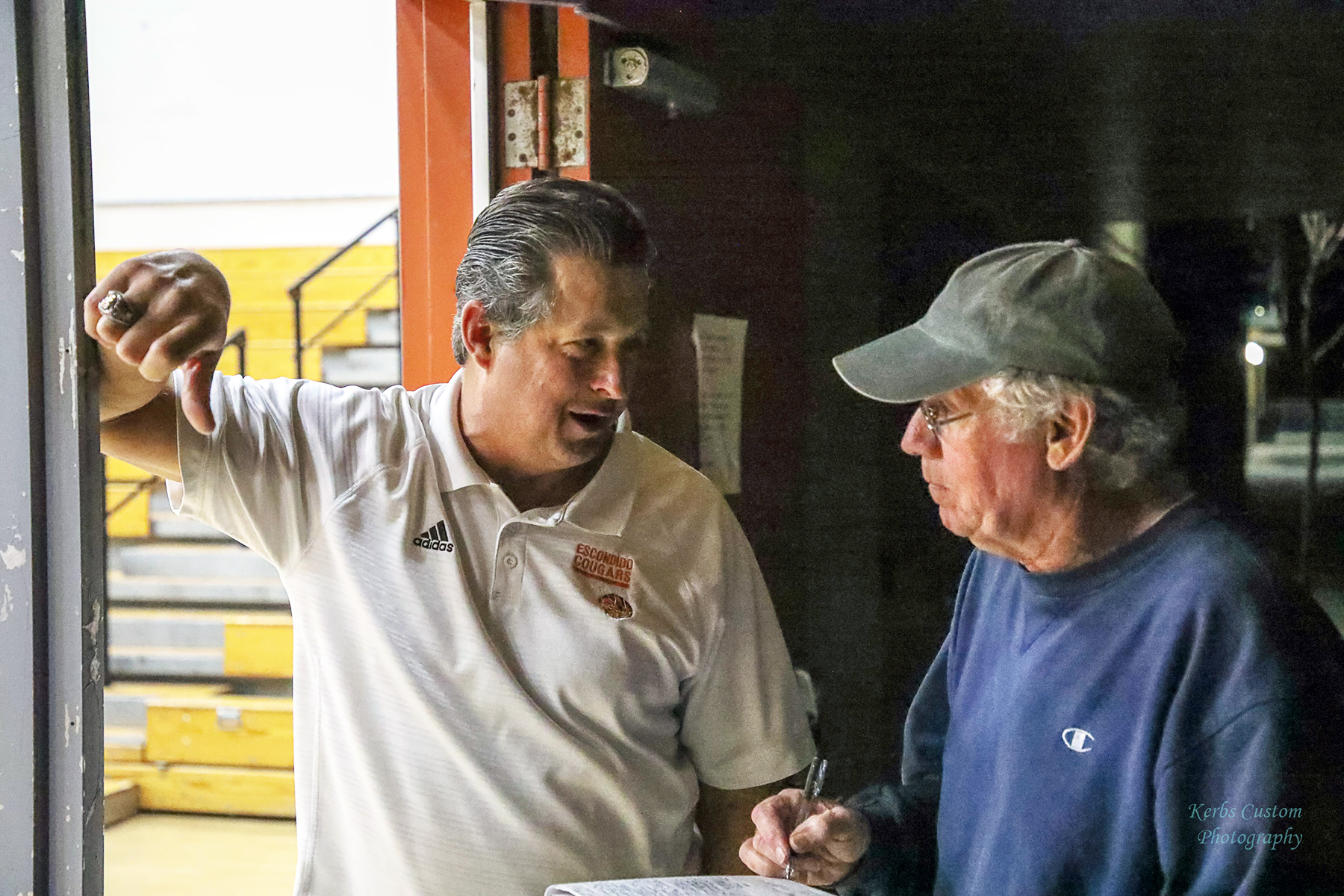 Despite having endured a painful season-ending loss, Esco coach Paul Baldwin went out of his way to make himself available to T-A sportswriter Jim Tal Evans. (Lenny Kerbs)

In my three years of covering the Escondido prep scene for the Times-Advocate, I’ve had the chance to meet and interact with plenty of coaches engaged in a wide array of sports. And I can honestly say I’ve never had a negative or uncomfortable experience with any of them.

The vibe has always been one of mutual respect, accommodation and an understanding that having a symbiotic relationship between the media and a given team/school is to the mutual benefit of all those concerned.

And while everyone I’ve dealt with has been professional and personable, there have been certain individuals who have gone above and beyond with their cooperation and accessibility. Paul Baldwin, Escondido High’s highly respected and accomplished basketball coach for the past 21 years, most definitely fits into that category.

Before proceeding forward, let me provide a bit of background for those not all that familiar with Baldwin and his accomplishments. A 1988 graduate of EH, Baldwin returned to his alma mater in hopes of resuscitating a floundering program. In the year prior his arrival, the Cougars struggled mightily, winning but a solitary game while losing 25. The season before that was also a bummer as evidenced by a 3-23 record. Many were openly wondering what in the heck Baldwin was getting himself into. But the loyalty tug proved strong and the committed Baldwin was anxious to make the Cougs relevant again.

And has he ever! In addition to over 350 wins, Baldwin has shepherded Esco to three San Diego Section titles including a Division I crown in 2015, two other appearances in the section finals and numerous league championships. It isn’t hype to suggest that he’s become a bona fide institution at the iconic school located on North Broadway.

This past season Baldwin clearly demonstrated that he maintains his deft touch. At one stage of the campaign, Esco’s record stood at just 7-10 but the venerable coach exhibited no panic. He knew that the non-league portion of the schedule—which had been testing and tough—would steel his team for the its run through the Valley (League) and into the postseason. Moreover, Baldwin’s career has been characterized by an ability to get his teams to peak when it matters most. And right on cue, the Cougars caught fire down the stretch, going undefeated in league (10-0) while ripping off a 12-game winning streak.

That notable surge was responsible for advancing the Cougs to the quarterfinal round of the SD Section Division II playoffs where they hosted an athletic Bonita Vista squad that had already taken down No. 2 seed Westview. But Esco would be operating under the severe handicap of having to carry on without its terrific point guard Julian Hutchinson, who’d suffered a knee injury in the previous game versus Mira Mesa. Nonetheless, despite Hutchinson’s glaring absence, the gritty Cougars were able to carve out a slim three-point lead in the fourth quarter, only to see the Barons rally late and then hold on for a 58-55 victory.

Needless to say, it was a heartbreaking loss. Making it even more difficult to accept was the knowledge that had the super soph Hutchinson been available, the outcome probably would have been decidedly different. A haunting what-if scenario hung over the Cougs as they congratulated the Barons and then understandably, quickly retired to the locker room. A disappointed Baldwin dutifully followed his players into their sanctuary, knowing that it would fall upon him to provide both solace and perspective to his hurting players. The task before him would not be an easy one.

In the immediate aftermath of a dispiriting loss such as this, a reporter must be sensitive to the feelings of the vanquished. With emotions a jumble and so close to the surface, the last thing you want to do is intrude on someone’s grief and worsen an already deflating experience.

Operating on a gut instinct, I opted not to seek out either Baldwin or any of his players for a comment or two about a near-triumph that had barely eluded them. Something told me to give them their space and allow them to commiserate with one another in a private setting without interruption or disturbance.

As a result, the T-A’s crack photographer Lenny Kerbs and I gathered up our belongings and headed for the back exit of the Cougar gym which was beginning to noticeably thin out. As we reached the exit, I heard a voice beckoning us from behind. It was none other than Baldwin who had gone out of his way to track us down and make himself available for some post-game discussion and analysis.

This simple act truly resonated with me. The coach was certainly under no obligation to interact with us and if he had elected to remain in the locker room to decompress, that would have been totally understandable. To be truthful, that would have been the course that many other coaches would have chosen. Baldwin had always been gracious in victory – now he was showing his class in the wake of a gut-wrenching, season-ending defeat.

So for the next ten minutes or so, he patiently responded to all the questions that I threw at him. Baldwin makes for a great interview because he is insightful, candid and expansive with his answers. Very much like Valley Center’s Jon Jones, whenever you listen to Baldwin, you feel as if you’re being given a basketball tutorial that is both understandable as well as nuanced.

And while soaking in his words, it dawns on you why Baldwin has been such a success mentoring young men. Not only does he know his stuff when it comes to the X’s and O’s and  the finer points of the game, but his passion is readily apparent as is why he relates so effectively with his players. As a coach and as a person, Baldwin gives every appearance of having the right stuff.

After Baldwin eventually took his leave, Lenny and I made our way to an adjacent parking lot. As we did so, our conversation turned to Baldwin and we both marveled at the consideration and presence of mind that he had shown by seeking us out. Each of us had always held him in high regard but our estimation of him rose even more because of the manner in which he had conducted himself after absorbing such a disheartening blow.

Revealingly, Baldwin had proven himself to be a class act and the epitome of a winner – even when he lost.