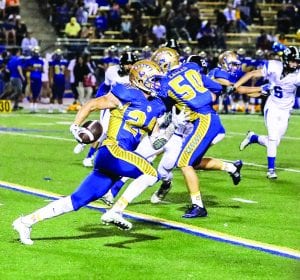 Thomas DelMastro was a factor on kickoff returns with his committed and decisive running.

Going into their Friday night clash with visiting Ramona (3-0), the San Pasqual Golden Eagles (1-2) were fully aware that they would be in for a mighty stern test.

The Bulldogs, who welcomed back an astonishing number of 19 starters, had already crushed Mater Dei Catholic by 34 points before taking out perennial mainstay Point Loma (21-14). Moreover, adding to Ramona’s intrigue was the fact that it featured one of the most dynamic and versatile offensive talents in the entire County, running back Tristan Stacy.

So the Golden Eagles certainly anticipated one heck of a tussle, not to mention a testing evening. The only trouble was that the challenge proved to be even more daunting than anyone connected with SP could have imagined. Showcasing a scary-good offense as well as a defense that was stifling at times, there was simply no stopping Coach Damon Baldwin’s crew as it rolled to a convincing 41-7 victory. And not surprisingly, the electric and elusive Stacy more than lived up to the hype that preceded him, rushing for 124 yards and finding paydirt on three occasions.

There were only short stretches of time where it felt that the Golden Eagles were completely in this contest. By scoring 21 first-half points and then tacking on 14 more in the third stanza, the Bulldogs were pretty much in control throughout most of the proceedings. Any element of suspense as it related to the ultimate outcome was basically removed when the guests scored their third touchdown with just 20 seconds remaining before intermission.

And as they left the field at the half, the Golden Eagles were a quiet, somber and disappointed group, knowing that the task would be monumental trying to overcome such a substantial deficit against a locked-in and confident foe.

The Bulldogs basically set the tone for the entire night when they parlayed the opening possession of the game into an 84-yard touchdown advance. The key plays on this drive were a 23-yard pitch/scamper by Stacy, a 17-yard strike from quarterback Casey Buggeln to tight end Riley Armstrong 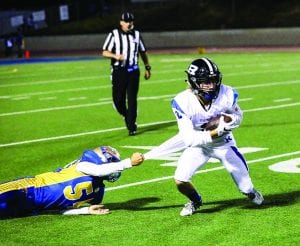 Like the rest of his defensive teammates, San Pasqual’s Cameron Fleming found it difficult to get a hold of Ramona’s sensational Tristan Stacy. Photos by Lenny Kerbs

and then a third-down swing pass to Sean McDonald. The physical Joaquin Gonzalez did the honors soon after when powered his way in from four yards out with less than four minutes having been played.

On its very next series, Ramona continued to pick up substantial yardage and moved all the way down inside the SP five-yard line. The Bulldogs seemed poised to put another six points on the board but to its credit, the Golden Eagles defense dug deep and forced a timely turnover. Gonzalez took a solid hit after accepting a handoff and when the ball came loose, the active Thomas DelMastro was quick to react as he gathered in the loose pigskin. At the time, this play seemed to perhaps signal a momentum shift but in reality, it amounted to only a temporary reprieve.

Unable to capitalize on this bit of good fortune, SP would soon pay a price for not doing so. Ramona was about to undertake a massive 90-yard trek which was highlighted by a clutch keeper by Buggeln that saw him employ a smooth move to the outside before he was brought down just shy of the goal line. Following a nice surge from his center and guards, Buggeln scored from two yards out on the very next play.

And when the Bulldog defense quickly blunted SP once again, there was a sense that Ramona was about to seize control of the game. And that’s exactly the way things played out. Effectively utilizing five productive carries by McDonald who demonstrated that he could either pound it inside or get to the perimeter, Ramona maneuvered in close. And from there, Tracy found a gap and artfully slid to the outside where no one was going to possibly catch him.  This 2-yard tally put a punctuation mark on Ramona’s dominant first-half effort and earned for it a sizeable margin after 24 minutes. 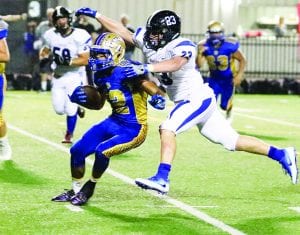 G. Eagles running back Shawn Carter, about to be corralled here by Sean McDonald of Ramona, was a bright spot in the 41-7 loss.

If the fans of the Golden Eagles were harboring any faint hopes for a memorable comeback, they were dashed shortly after the break when that man Stacy was presented with an opening and then, like a shot, he was gone – hightailing it some 47 yards while defenders were left to eat his dust.

But perhaps Stacy saved his real coup de grâce moment for less than three minutes later. Ready to hold for kicker Derek Diamond on a 31-yard field goal attempt, the snap squirted low and Stacy was forced to retrieve it and make the most out of what appeared to be a very dicey situation. But cool under fire and with an enviable presence of mind, the gifted senior used his admirable vision, drifted  left and after going into overdrive, simply scooted his way down the sideline and into the end zone for a rather remarkable tally. Those in attendance could only marvel at how a seemingly botched play that looked to be headed for disaster could possibly be transformed into something so sweet. In addition to being one heck of a football player, the 5-foot-9 Stacy obviously has some magician in him as well.

Now trailing 35-0 midway through the third quarter and with their mettle being put to a real test, the Golden Eagles managed to step up and show their heart. An eight-play, 65-yard drive demonstrated that there was definitely no quit in SP. Two well-thrown strikes as well as a nice touch screen by QB Westin Erdman were the catalysts that got the G. Eagles moving goal ward. Then it was left to promising running back Shawn Carter, who made a dandy cut inside that allowed him to cross the scoring stripe, courtesy of an 8-yard tote.

And when linebacker Johnny Vega immediately followed up with a splendid interception that he held onto after a momentary bobble, there’s was hope that the G. Eagles might be able to keep the positive vibe going. However, on the ensuing play Erdman aggressively went downfield only to have his overthrown pitch picked off by Cameron Necochea and so that promising prospect went for naught.

The Bulldogs put a notable bow on the night’s scoring early in the fourth stanza when back Caleb Berman burst up the gut and discovering a cavernous hole, he quickly kicked it into gear and sped his way towards a 67-yard paydirt run. Berman displayed plenty of acceleration as no one was able to close on him.

Though to a great extent Ramona’s offense stole the show, its defense was every bit as instrumental in the victory. Repeatedly putting pressure on Erdman and able to totally shut down the Eagles vaunted fullback dive play, nine players recorded three or more stops. The pacesetters in this category were J. Gonzalez and Jack Drews who respectively recorded eight and seven total tackles while Nick Maccini, Caleb Berman and Danny Phillips contributed five apiece.

On the other side of the ball, Stacy was definitely the headliner as he rang up 181 all-purpose yards while Berman was also a force, gaining a robust 130 yards on the ground. Signal-caller Buggeln was another productive performer, completing 7 of his 12 passes while adding on 34 yards with his four carries. 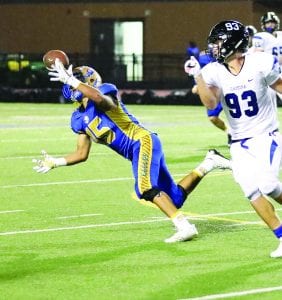 After momentarily bobbling the ball, SP’s linebacker Johnny Vega came up with this terrific interception.

Despite the score, San Pasqual also had its share of players who had their moments. Middle linebacker Tim Hansen made a passel of tackles, showed some real fire and didn’t back down an inch. Meanwhile, defensive back DelMastro and Vega were factors as well, smelling out plays and registering plenty of stops. Plus, DelMastro is deserving of additional mention for the assertive and decisive manner in which he brought back multiple kickoff returns.

And then there was Carter, who brought a real spark to the offense with his determined and productive rushing. Based on what he showed versus Ramona, Carter just might see his workload increase as the season continues to unfold.

Next up for San Pasqual is its annual Battle for the Bear tussle this Friday night with nearby neighbor Orange Glen. Both teams will enter that contest with losing streaks that they’ll be anxious to snap.

It will be interesting to see how the Golden Eagles react to the loss to Ramona. In their opener, they blitzed Granite Hills 52-7 before suffering a tough 14-7 setback to Vista. This team showed that it was solid, competitive and capable of putting lots of points on the board through the first two weeks of the season. But then came the Ramona contest which must be candidly classified as a step back.

Now, it’s time to regroup and get the season back on track. And as he has demonstrated many times throughout his career, Coach Tony Corley knows how to right the ship and get his team to respond, move on and succeed. There’s no reason why that shouldn’t be the case once again.