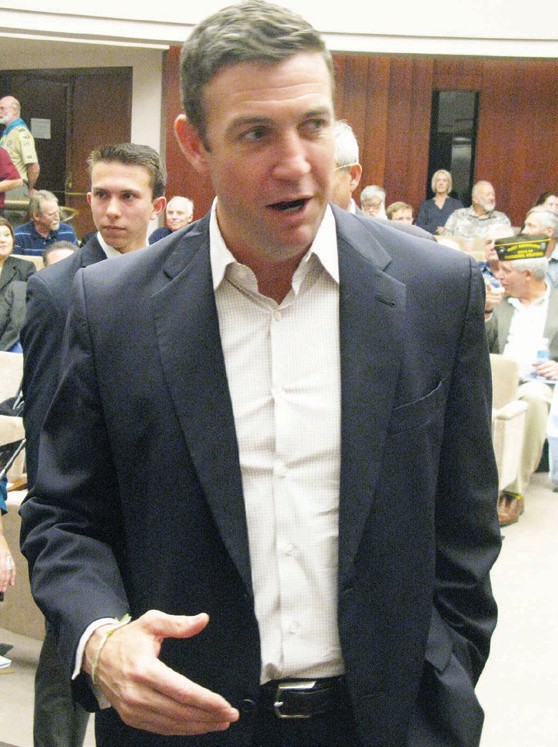 Hunter polished his conservative credentials by answering written and oral questions from the crowd of more than 100 citizens, well-wishers and even two Bernie Sanders supporters.

He gave his opinions on Obam­acare, immigration, the burgeoning federal budget, women in the mili­tary, the case of Green Beret 1st Sgt. Charles Martland, climate change and political choices.

Hunter, who wields a quick mind and nonstop verbiage, was well-in­formed and somewhat controversial on many of these topics.

For example, he naturally took the conservative position against Hillary Clinton, saying that she and President Obama lied about the seizure of the U.S. Embassy in Benghazi that ended in the deaths of four Americans.

But he added that the Department of Defense should have had fighter planes ready to pounce in support of the U.S. diplomatic team in Libya. The attack took place on the 11th an­niversary of the Sept. 11, 2001 attacks.

Hunter has taken up the case of 1st Sgt. Martland, who was thrown out of the Army for roughing up an accused child rapist.

According to the Washington Times, Martland was removed from the war zone after he confronted an Afghan police chief who was accused of raping a 12-year-old boy. Martland, who went on three war deployments and earned a Bronze Star, has tried to get back into the Army, but lost an ap­peal. Hunter’s office supported a re- opening of the case, which is pending.

Hunter is a member of the House’s Education and Labor Committee: “We just got rid of the federally enforced common core standards,” he said to applause, “Now states like Texas don’t have to be under the federal thumb of the “Washington DC school board.”

California schools continue to use the Common Core curriculum, but the legislation allowed states to opt out. Eight states and Puerto Rico have not adopted Common Core.

He is chairman of the Maritime Coastguard Subcommittee: “One thing I learned on the subcommittee was this: If you can get 2,000 pounds of cocaine into America, you can in 2,000 pounds of anything whether it’s a nuclear device or other weapon of mass destruction,” he told the crowd. “The terrorists have learned how to get into our country not by flying in, but through our southern borders or through our coastline.”

He serves on the Armed Forces Committee: “That is, generally, pro­tecting our allies, executing America’s will throughout the world, making sure we have the strongest, 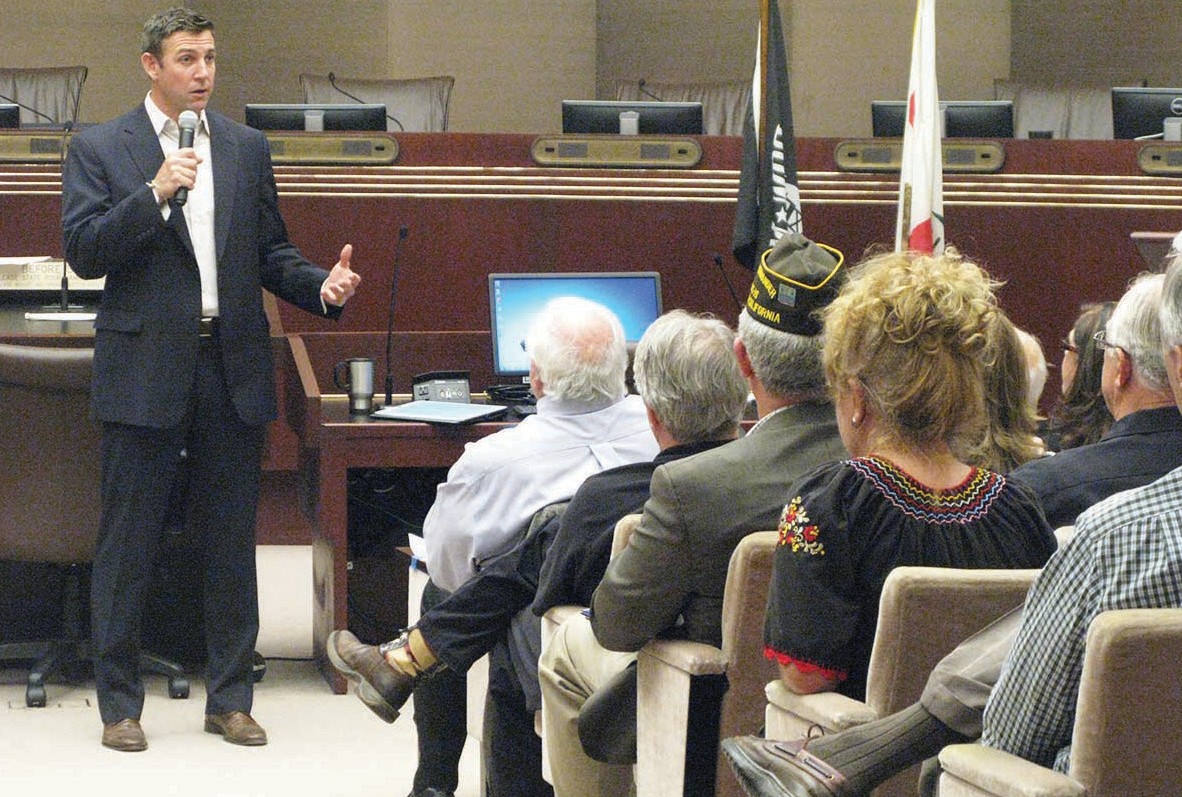 most capable military in the world,” he said.

Hunter responded to a question about a recent influx of Cuban immigrants to the U.S, which involves what is known as the Wet-Feet, Dry-Feet policy. Dur­ing the Cold War the U.S. was eager to grant asylum to refugees from Com­munist countries. Cubans caught on the seas trying to immigrate to the U.S. had “wet-feet” and were sent back to Cuba or to another country.

But once immigrants got to the U.S. and had “dry-feet,” the government would give them a chance to become a citizen.

As the Obama administration heads toward normalizing relations with Cuba, many immigrants from the island nation are going through the southern border and applying for status as refu­gees from a Communist nation, Hunter explained.

He blames the Obama’s Administra­tion for lack of action to stem the tide.

On Iran and nukes

Asked whether he supported Presi­dent Obama’s initiative to prevent Iran from getting a nuclear weapon, Hunter replied with an emphatic “No!”

“Here’s what the president did and frankly I don’t understand why … why do you help somebody that lies to you, cheats … and kills Americans, which they did in Afghanistan and Syria. They just aren’t trustworthy,” he said.

He added that Iran could have nu­clear weapons in 15 to 20 years, in “a best-case scenario” and 10 years in the worst case. He was angry that the administration continued with easing sanctions when 10 U.S. sailors were captured and held by Iran.

Hunter said he gets questions about the cancer-causing agent from the Vietnam War. Some people believe that the defoliant was carried to ships off of Vietnam and later caused cancer.

“You’ve had people who served on ships and have cancer and that may very well be the cause,” he said, add­ing, “but you can’t tell (where it origi­nated) and you can’t prove it.”

“This seat, if I were to die right now. You would probably elect a Re­publican because it’s a conservative district. The Republicans don’t control the House of Representatives because of a district like this one,” Hunter said.

“They control because of Repub­licans … in suburban districts on the outskirts of Chicago, of Pittsburgh, of Los Angeles and Omaha.”

He noted that districts that could have gone either way were taken by the energy of the Tea Party movement.

“I’m a Tea Party guy in some places and not in others. If you were to lose all the Tea Party people that some Re­publicans get mad at, the Democrats would be in control of Congress.”

Hunter looks forward hopefully to repealing the Affordable Care Act, aka Obamacare. He said there were many people in Congress, doctors and others who could be used 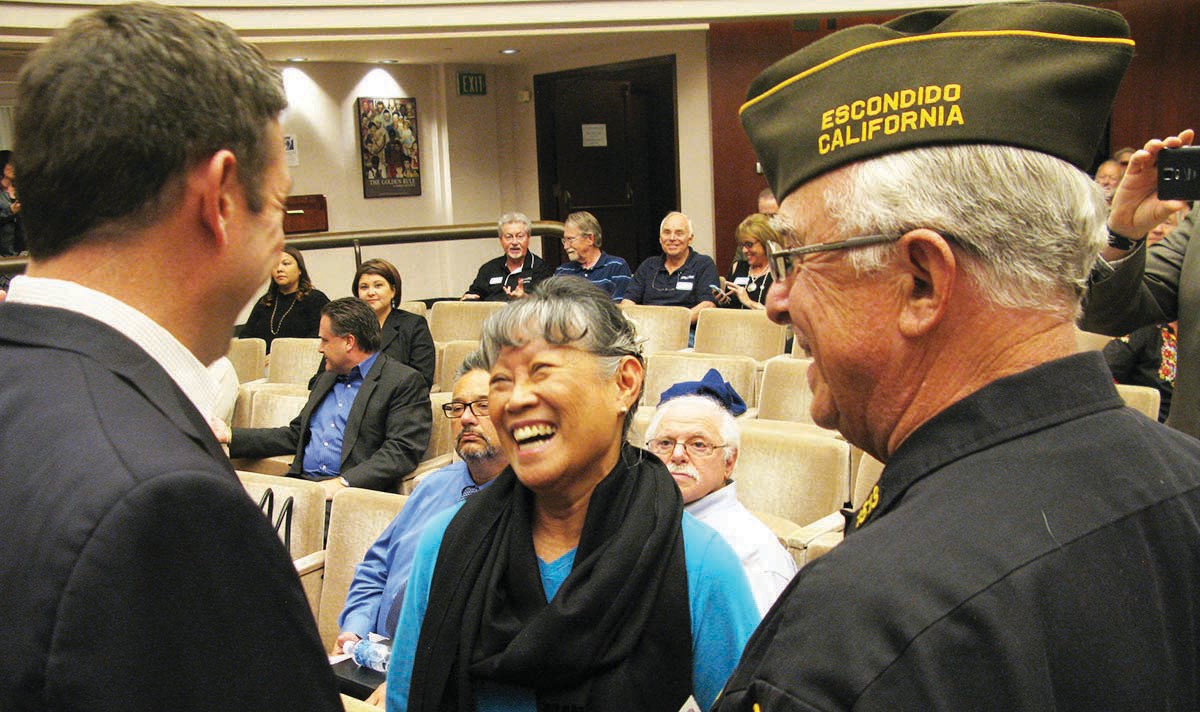 Rep. Hunter chats with Veterans of Foreign Wars member Mike Burke and his wife Gina at the Town Hall meeting. The congressman spoke on a number of topics including his desire to “blow up the VA” to create bet­ter access to health care for veterans.

as resources. “When we repeal Obamacare, these are the people we are going to ask for what we should replace it with,” he said

On women in combat

Hunter said the Obama adminis­tration has been working on allowing women in combat for several years. He noted that warfare had changed from “Saving Private Ryan” of World War II to counterinsurgency work and that female soldiers were already being ex­posed to the latter style of war that cel­ebrates the ambush.

The father of two daughters and a son strongly opposes having women in combat roles.

“I’ve talked to coffeehouse liberals in San Francisco and Christian families sitting around their table at night and neither one of those groups want their daughters to face mandatory service at 18 years old,” he said.

He said he wanted to float a bill, “Draft America’s Daughters,” that would favor sharing the draft equally between the sexes, but that he would use the bill only to “get Americans talk­ing” about the issue.

He said a Marine Corps study looked into having women in combat roles. “The answer came back no,” he said. “Women move slower, do not shoot as well and have more injuries. That was a peer-reviewed study that the Adminis­tration ignored.”

On care of veterans

Rep. Hunter is working to get the Veterans Administration out of many types of healthcare for veterans. He favors a system that uses Tricare, the Defense Health Agency’s medical sup­port for veterans. Hunter believes the VA should be limited to combat-related injuries, focusing “on prosthetics, post- traumatic stress, traumatic brain injury, burns and combat wounds,” he said. “Unless you fall into those categories your should get your Tricare card and go to any health provider that you want to.”

He’s planning a bill that will “blow up the VA,” reducing it to handling post-combat medicine and promoting Tricare for long-term health care.

Hunter graduated from Granite Hills High school in El Cajon and earned a business degree from San Diego State in 2000. After the attacks on Sept. 11 2001, he quit his job in informa­tion technology and joined the Marine Corps.

He served in three tours of duty, the second of two tours in the Iraq War as a forward artillery observer in the battle for Fallujah in 2004. After becoming a reservist he was call to duty in Afghani­stan two years before he was sworn in to office in 2009.

Duncan Duane Hunter followed his father Duncan Lee Hunter into politics in 2008. After 14 consecutive terms in the House, the Duncan the elder made a bid to become president. Deemed a “third tier” candidate, the long-time congressman had to drop out of the race.

His son won his seat in Congress during the same political season.

He and his family live in Alpine, Ca­lif.