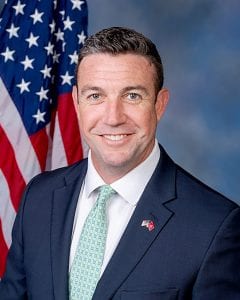 Rep. Duncan Hunter’s announcement Monday that he would be changing his plea from innocent to guilty in his campaign finance case has suddenly overturned the dynamic of the race for the 50th congressional district, which he represents, but which he indicated he was no longer a candidate for.

The 11-year congressman appeared in court on Tuesday to change his plea from not guilty to guilty, something that Hunter said that he did for the sake of his children.

He told KUSI News: “My trial was set for January 22 — that’s not going to happen now. Tomorrow, on Tuesday, I’m going to change my plea to guilty. I think it’s important not to have a public trial for three reasons, and those three reasons are my kids …”

He added, “ It’s been a privilege to serve in Congress for 11 years, three tours in the Marine Corps in the wars. I think we’ve done a lot of great things for the nation.”

Hunter’s wife, Margaret, plead guilty earlier this year and agreed to testify against him.

The leaves the race to the Democrat, Ammar Campa-Najjar and Republicans, former radio talk show host Carl DeMaio, State Senator Brian Jones and former Congressman Darrel Issa, and a host of independent candidates, including the most visible of the Indies, Helen Horvath.

Because of California’s “Jungle Primary,” which happens in March, the top two candidates, whether two Republicans, or a Democrat and a Republican, or some other combination, will face the voters again in November 2020.

Ammar Campa-Najjar, the Democrat who is currently shown leading in the polls, released this statement: “Today is a sad day for this district because no constituent hopes to see their congressman plead guilty to corruption. But today is also a day filled with opportunity because it’s the first time in years people, not political scandals, will come first again.

“Right now, we need a bi-partisan local leader to restore integrity, the public trust and bring people together to deliver results. I’m going to take a fresh independent approach to fight for affordable housing, healthcare, education, wildfire relief and prevention, and infrastructure reform.

“On day one I will focus on the same working folks who are funding my campaign and not for the corporate special interests in D.C. who own Congress or bankrolling the career politicians in this race who aren’t from here and don’t know the first thing about the struggles of the East County families I grew up with.

“My thoughts are with Major Hunter and his family, I want to thank him for serving our country.

DeMaio, who polls show leading among the Republicans, released this statement:   “While this must have been a tough decision for him, Congressman Hunter’s decision to plead guilty is the right one for his family and his constituents and shows that no one should be above the law – especially Members of Congress. My thoughts and prayers are with the Hunter family as they go through this difficult process.”

Issa released the following statement:  “As a friend and a colleague, I thank Duncan Hunter for his service to our country in the Marine Corps and in Congress, where he has always been a strong conservative voice on behalf of his constituents. Though his misuse of campaign funds was clearly wrong, I wish him and his family the best as they address the matters ahead of them.”