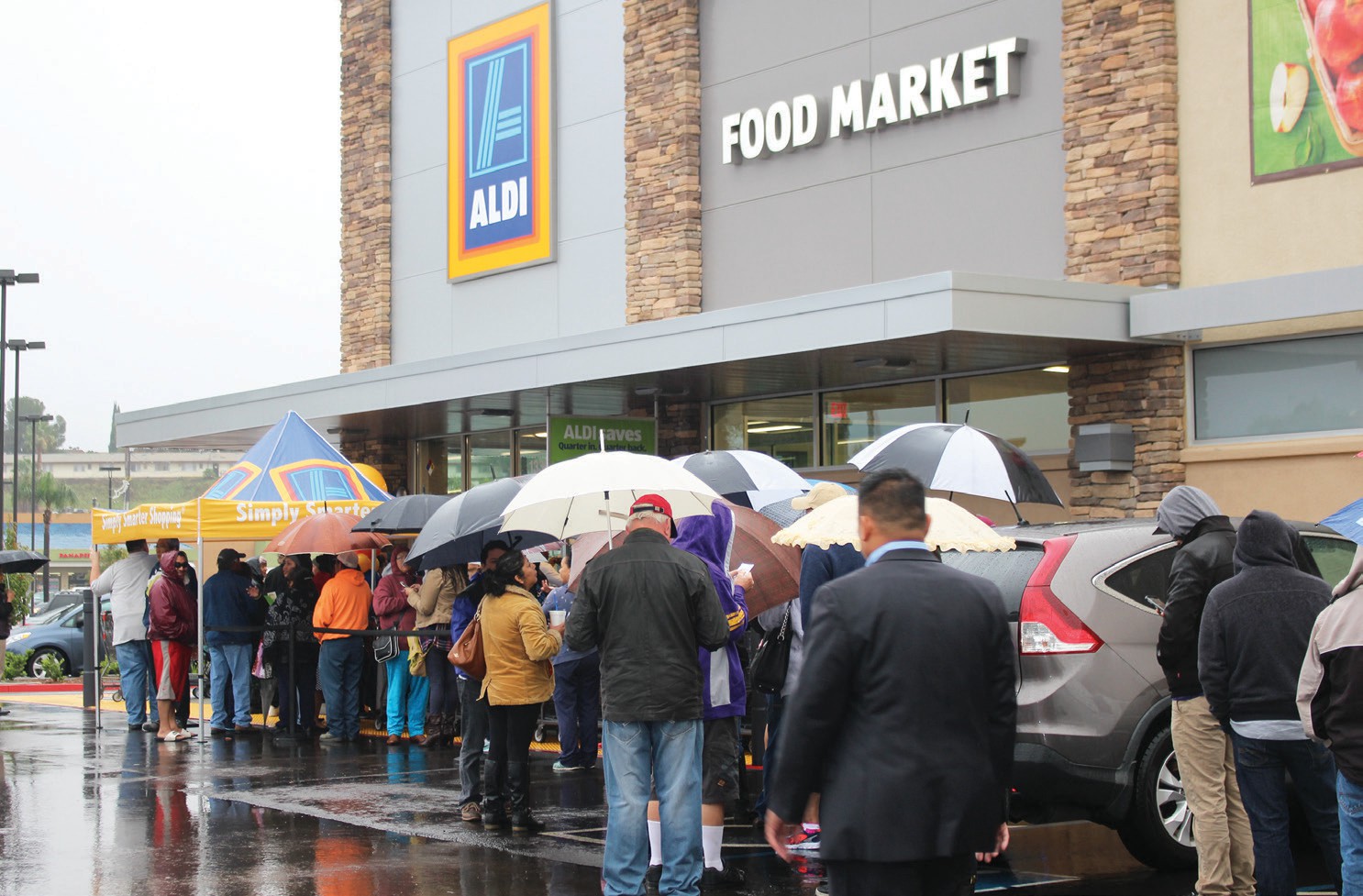 Although it was raining steadily, a couple of hundred shoppers waited patiently under the umbrellas to enter the brand new ALDI supermarket.

Twenty-five cent avocados, and double guarantees on groceries and a claim that you can save 50% on most products— oh my!

Friday morning hundreds of residents braved the rains to be among the first shoppers at the new ALDI supermarket located in Trafalgar Square, at 1330 E. Valley Pkwy. Festivities included an official ribbon-cutting ceremony, golden ticket giveaway to the first 100 shoppers, produce for a year sweepstakes and an ALDI reusable eco-friendly bag giveaway.

Although California recently adopted a law that requires all markets to charge customers for bags, ALDI has been charging for its high-quality bags for years. This first day, however, they gave them away 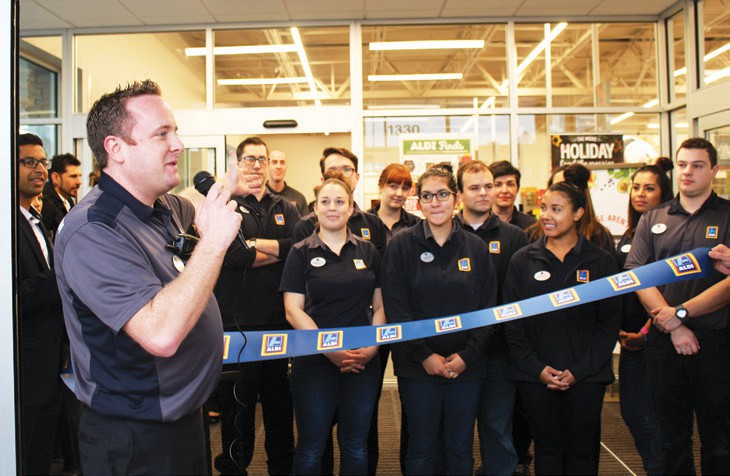 Store manager Greg Mosher introduces his team just before the ribbon is cut to let the public in.

to all the new customers who walked in.

Gen. Mgr. Greg Mosher, mindful of the mass of shoppers huddling under their umbrellas, quickly posed his management team at the entrance to the store for an introduction and a photo op and then quickly snipped the ribbon with oversized shears.

Soon the crowds were happily flowing into the store’s wide aisles that are, as Mosher pointed out, easy to navigate with shopping carts. Speaking of shopping carts, ALDI’s is doing its part to keep shopping carts from blocking your parking spaces by making it worth your while to return them. It charges a quarter deposit, which you get back 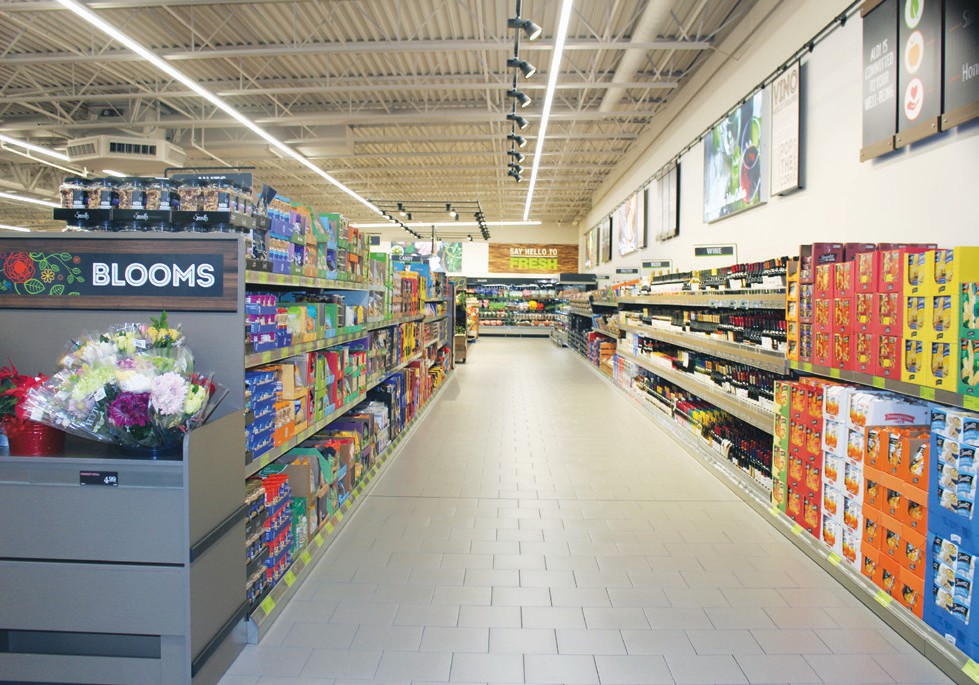 ALDI has five, very wide aisles, making for ease of maneuverability. The photo was taken moments before the public was allowed into the store on the first day of its opening.

when you bring the cart back.

This newest addition to the East Valley Parkway Mile of Supermarkets (or is it three miles?) is well equipped to compete with the Ralph’s, Von’s, Albertson’s et al. Of course, ALDI isn’t just the newest kid on the block in Escondido, it’s making an impact all over Southern California. It is a well-established institution on the East Coast, where it has been operating for more than 40 years. It has almost 1,600 stores in 34 states. It originated in Germany.

ALDI operates under slogans such as “Save up to 50% on quality groceries,” “Simply smarter shopping,” and says that it builds up 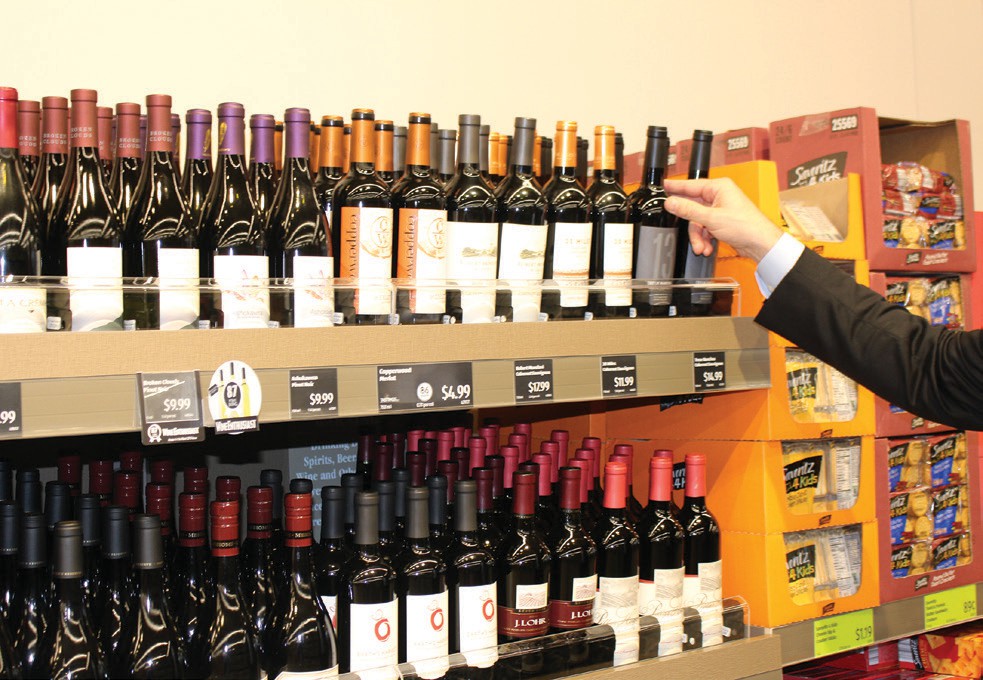 ALDI is also known for its wine section, which has very competitive prices, as you can see.

a loyal clientele by advising its customers to save by switching from national brands to the store’s private label brands, such as “Fit & Active” or “Benton’s,” “which must meet or exceed the national name brands on taste and quality,” according to the store’s marketing materials.

They sell local produce whenever possible and have a large supply of organic offerings, along with many gluten free products. Their “produce pick of the week,” will be sold at an especially low price.

Obviously with this approach you won’t get very far by using coupons. But the store does offer weekly specials on many items, some of them available just that 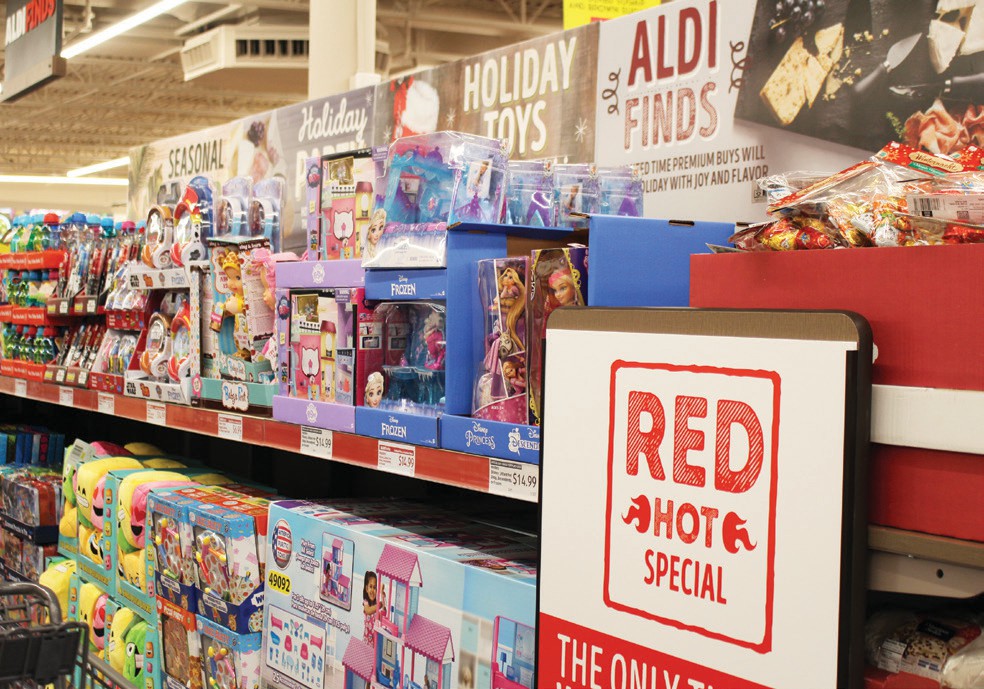 ALDI has a shelf of “red hot” specials that are on sale for a short time.

week, or until they run out. These are called “ALDI Finds” and include food and non-food items.

ALDI offers a Double Guarantee, which means that if you buy a product and don’t like it for some reason, they will give you a refund AND a replacement.

ALDI’s resists being labeled. “We’re not a boutique market. We’re not Trader Joe’s. We’re not Sprouts. We’re ALDI,” said Bob Schmalz, who is the director of operations for the chain’s southland properties, and who on the morning we caught up with him for the store’s ribbon cutting, mentioned that he had opened several other stores this same week in Long Beach

Proud store manager Greg Mosher, with ALDI’s famed produce section, also a source of much pride. The store carries a local produce, much of it organic, with the boast that you will pay half the normal price. An example: avocados cost 25 cents on opening day.

Schmalz treats its employees right, he said. “We pay fantastic wages and our associates are all full time employees,” he told The Times-Advocate. Associates are given 17-day training programs.

“Everything about our store is aimed towards making it more effective and costing less to the customers,” he said. That includes such things as not having an ATM machine on premises. “We don’t want to ‘pass through’ the cost of things that our customers don’t use.”

He introduced Greg Mosher, the general manager, who has worked for ALDI for two years, but has been in retail for 20 years. This is his first store to manage.