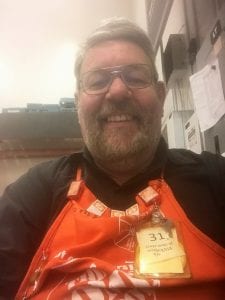 James Girsch, when still employed at Home Depot. Girsch was one of an undetermined number of whistleblowers that helped the EPA determine that Home Depot was dumping hazardous materials into area landfills.

James Girsch, 65, a former employee of the Home Depot in Escondido, whose Georgia parent company in March 2018 was assessed a $27.8 million fine for illegal hazardous waste dumping, is suing the company, claiming he was punished for being a whistleblower on Home Depot’s longtime alleged illegal activities.  Activities he claims Home Depot continues, despite it being put on a five year consent decree by the courts not to do it again.

As an informant, Girsch claims he was “singled out by Home Depot with acts of oppression, fraud, malice, defamation and criminal activity in an attempt to silence his voice.”

Girsch, an Escondido resident, first filed a lawsuit on November 29 alleging violation of whistleblower laws and claiming retaliation from the company in violation of the California Fair Employment and Housing Act (FEHA) and against several of his supervisors at Home Depot for illegal retaliation. His attorneys may add wrongful termination to the five counts of violation of whistleblower OSHA and FEMA laws. He is demanding a jury trial and punitive damages, to be determined.

Home Depot was served on December 4, and, according to Girsch, hasn’t yet answered the suit.

“They did their best to drive me out, but that wasn’t successful; so, on the 21st   [of December] they terminated me. Merry Christmas!” said Girsch this week when he visited The Times-Advocate offices. “They said it was a policy violation.” Girsch believes it is the culmination of a long list of retaliatory actions supervisors took against him after he began reporting Home Depot for violations that included dumping hazardous materials in the area’s landfills.

The judgment resulted from a civil action filed on February 15, in Alameda County and led by the San Diego County District Attorney’s Office, and other prosecutors, who alleged that more than 300 Home Depot stores and distribution centers in California were “routinely and systematically sending hazardous waste to local landfills that were not permitted to receive those wastes, and were tossing documents containing sensitive customer information into store trash bins, potentially exposing the information to identity thieves.”

Girsch says he was one of the informants in the case of hazardous materials disposal. He doesn’t know how many others there were. “A few people came forward, and I was one that was in 2013 that became transparent,” he said. “I had our store investigated for things I was seeing and the management falsified the conclusions that there wasn’t any illegal activity going on. They said that for two or three years.”

Girsch went to work for Home Depot in 2005 as a sales associate. In 2008, he became a department supervisor in Ontario. In 2011, when he moved to Escondido, he went to work at the 1475 E. Valley Parkway store. In 2014 he became supervisor of the paint department, a $5 million a year business within the store.

According to his lawsuit: “Plaintiff observed that Defendant would regularly dispose of its hazardous materials (“hazmat”), including paint, lubricants, solvents, electronic parts, flammable substances, and other chemical waste, by dumping them into public dumpsters headed to public landfills, instead of being properly processed for hazardous waste disposal. Plaintiff also noticed that Home Depot would collect foreign waste, including criminal drug lab residue, from outside the perimeter of its store building and dispose of them with the store’s garbage.”

“My two concerns is that they were dumping hazardous materials in the landfill, and Home Depot was cleaning up criminal drug lab dumps in the perimeter, without consulting with any other authority,” said Girsch. “They brought hazmat materials into the store, put it in plastic bags and dumped it into the trash compactor that was going to the public landfills.” He saw this himself many times.  “They denied it was happening, over four years—and that’s when I confronted them and had our store inspected by the EPA. They continued to deny that it was taking place.”

About December 2014 Girsch made a complaint under the California Health and Safety Code, Chapter 6.95, Section 25501, to the local EPA office, asking for an investigation of the store.

Around January 2015, Girsch was accused of a safety violation at work for using a 9-foot ladder to move stock, including paint buckets, from Home Depot’s 8-foot-tall store shelves. “This method of moving merchandise was frequently done by employees of Home Depot, often at the direction and under the supervision of management at Home Depot,” reads the lawsuit,” says the suit. “Plaintiff was unaware of anyone —including himself—ever being disciplined for moving stock using the ladders; thus, he believed he was targeted for discipline as a result of his safety-related complaints to the EPA.”

That same month, two managers pulled him aside and said he was “spreading false information” regarding illegal dumping of hazmat waste. Both denied any illegal activity and threatened to fire Girsch.

Meanwhile a former employee sued Home Depot for age-discrimination. Girsch, who was 61, felt he was also the victim of age discrimination and “believed that he was repeatedly denied promotions and targeted for discipline in ways that were not experienced by younger employees of Home Depot in their 20s and 30s.”  He complained to the Department of Fair Employment and Housing in April 2015 and several months later signed a declaration in support of the former employee’s age-discrimination lawsuit

November 2015 Girsch was put on final notice and threatened with termination for allegedly “hiding hazmat,” with management citing a six- week-old note regarding an empty can of paint found in a store cabinet. Girsch believes he was falsely documented in retaliation for his complaints.

When he began finding and reporting hazmat violations, Girsch was demoted to the tool rental department. Tool rental was considered undesirable for many reasons, one being it had even more hazmat violations that had to be cleaned up after—which Girsch also began to report on, he says.

In 2017 the Escondido store brought in a new general manager (named in the suit as  John Gonzales), who, “regularly made verbally-abusive comments, used profanity, and used sexually-explicit language and gestures. Under Mr. Gonzales’s leadership, the majority of the store’s managers began to also use similar language and engage in similarly offensive conduct. Many of these same managers also began to make negative comments to other employees about Plaintiff’s work in the paint department, including failure to maintain the appearance of merchandise in his department.”

Normally, says Girsch, Home Depot has a zero-tolerance profanity policy. Gonzales, who was brought into stores to “clean up ones not doing well” was the exception. Girsch claims Gonzales, who is still manager, changed the whole atmosphere.

In 2018 San Diego DA Stephan announced the $27.8 million fine. “This settlement marks a victory for both environmental and consumer protection throughout California.” She added, “Our Environmental Unit continues to work with our colleagues across the state to hold corporations accountable when they break the law and endanger our precious resources by illegally disposing of hazardous waste. We also want to make sure that consumers’ privacy and security is maintained and protected.”

Stephan added: “From 2013 to 2015, inspectors from the San Diego County District Attorney’s Office Environmental Protection Division partnered with other district attorney office investigators and environmental regulators statewide, to conduct a series of waste inspections of dumpsters belonging to Home Depot stores. A total of 45 trash compactors belonging to 31 Home Depot stores were inspected, and the inspections revealed that all 45 compactors contained hazardous waste . . .”

Girsch has networked with Whistleblowers of America and the National Whistleblowers Center in Washington D.C. “I have their endorsement,” he says. He hopes a congressional committee will invite him to testify.  “I know other companies do what Home Depot did. The issue is, do they get caught? Home Depot would continue to do it if they hadn’t been caught. All the locations in San Diego county were investigated and all of them failed the test. They found hazmat materials in every container. I believe it’s a companywide problem. I think they will find hazmat materials in every store that is being deposited in all of the landfills.”

After Home Depot was assessed the nearly $28 million fine, Girsch claims he was present when employees were told a completely different story than the truth.

“When those fines rolled out, managers came out to do special training. This fine was issued as a settlement and they were put on a five year consent decree. Managers told the employees that the state was getting into the bank account and charging them,” said Girsch. “They didn’t say they were being fined for their illegal activity. They blamed the state for assessing them a fine, without an acknowledgement of the purpose of the fine.”

Did the employees believe this story?  “Home Depot employees and managers tend not to be independent thinkers. They fall in line,” he said. “I came behind the managers and told them the truth, that the fines were not because California was trying to get into the company’s checkbook but because of their illegal activities.”

His motive, he says, is “Protecting the American public. The consumer is not privy to these things. I’m also working to advocate for the 400,000 employees in Home Depot that have been exposed to their criminal activity.”

He added, “The whistleblower function is to protect the public’s interest. They have chosen to retaliate against the whistleblower. Instead of working cooperatively with the informants, they work against them.”

When Girsch sued Home Depot it was probably the first time a current employee had sued although former employees had. “If they were going to take me out, I wanted them to terminate me involuntarily. They demoted and slandered me to try to force me out, but I wasn’t going to let that happen,” he said.

“Their efforts to silence me I can’t allow to happen. And so, the journey begins.”

He asserts Home Depot is still violating laws. “They are still cleaning up the chemical dumps in front of their buildings without cooperation with the police or anyone else,” he said. “The EPA investigated that and said they couldn’t do anything until someone gets hurt. I can’t wait for someone to get hurt. I’m trying to be proactive.”

The $27.8 million fine won’t make Home Depot change its corporate culture, claims Girsch. “That’s one day of profits,” he said. “They learned absolutely nothing. They knew about their activities and they did nothing.”

The Times-Advocate requested a comment from the Home Depot HQ in Georgia but at press time had not received one. If they do reply we will append it to our web version of this story.

13 responses to “Home Depot whistleblower sues for defamation and retaliation”