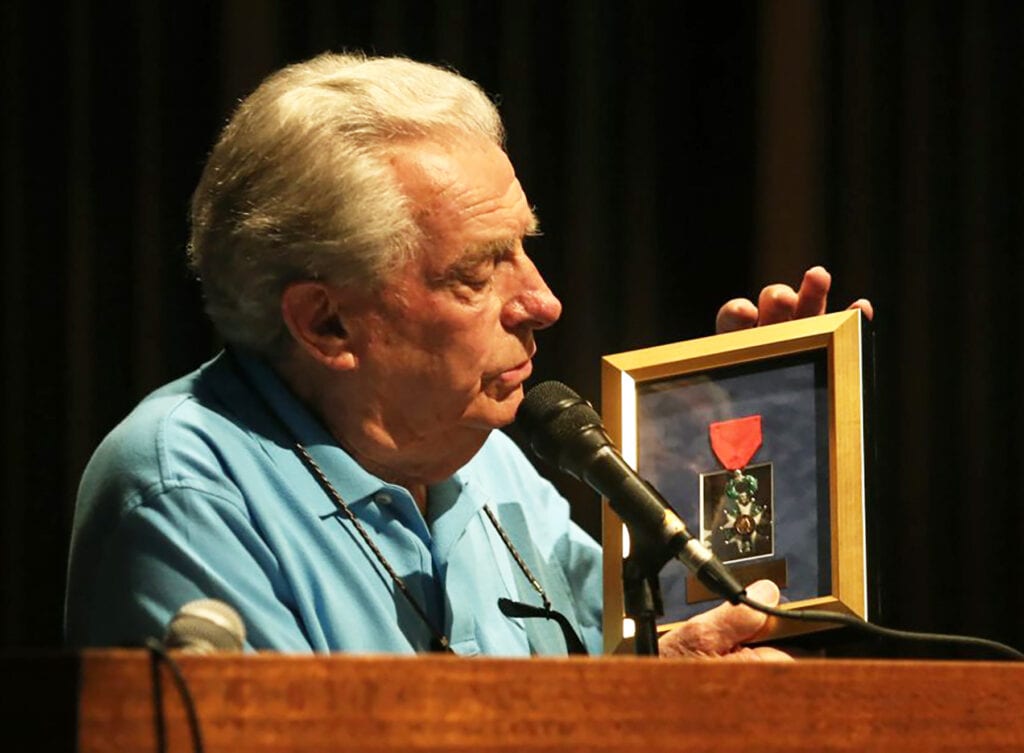 Jack Port with his Legion of Honor for service in France during World War II.

This is the last in a series of biographies of 2020 Escondido Legends presented by the Escondido History Center.

Jack Port is a hero of the Greatest Generation.  The other 2020 Escondido Forever Legends are George Cordry, Pete Coscarart, Robert Freeman, Sid Hollins and Jane Trussell.  The 2020 Founding Legends are Juan Batista Alvarado and Clifford “Gavy” Cravath.  Over the past weeks the Times-Advocate has published these biographies.

The Escondido History Center is working to inform outstanding seniors from high schools in Escondido about the eight $1,000 honorariums, provided by a donation from Jack Raymond, in the name of each 2020 Escondido Legend.

Jack Port is a graduate of Escondido High School, a successful businessman, a dedicated educational and community leader.  A look at his life begins with his family.

Jack Port and his father Charlie, mother Rena, and brother Marvin settled in Escondido in 1927 when he was 5 years old.  He attended local elementary schools and Escondido High School where he played basketball for four years and was Senior Class Secretary-Treasurer.  He also was in Hi-Y, Letterman’s Club and on the Cougar newspaper staff.  After graduating from high school in 1939 he attended UCLA.

World War II had started and Port left UCLA to work at Consolidated Aircraft in San Diego and was deferred from the military draft.  He had a strong urge to serve and enlisted in the Army and was sent to Camp Roberts for basic training.

Unlike many local young men who were sent to the Pacific Theater, Port was sent to England as a member of the 4th Infantry Division and stormed Utah Beach on D-Day. After establishing a beachhead, the 4th Division spent more than six months of continuous contact with the enemy, advancing east across France. He was part of the battle Sainte-Mere-Èglise, through the Cotentin Peninsula to Cherbourg, ending in Paris in late August.

Next, the 4th Division moved to Belgium against Siegfried Line, into Luxembourg for the Battle of the Bulge and the counterattack in January of 1945.  With heavy fighting they crossed the Rhine in late March. Continuing the push east through Bavaria, the 4th Division was finally put on occupation duty in May of 1945.

Later, reflecting on his experience Port said, “ If every person…served 24 hours in combat duty as an Infantryman, there would be no more wars.”  As self-effacing as he is, Jack did his duty and is a hero.  For his service, he has received a Purple Heart, Bronze Star, been declared an Honorary Citizen in three Normandy towns and in 2009 in Paris, inducted into the National Order of the Legion of Honor (France’s highest Military Award), and ended his service with the rank of Sergeant Major.  The citizens of Saint Pois, France, are so appreciative of Jack Port’s service, they have named their High School after him.

Upon returning from the War, Port purchased his father’s clothing business and established the very successful Port’s Men’s and Boy’s Wear on Grand Avenue in Escondido.  He closed the business in 1975.  In 1973, with other local businessmen, Port started the North County Bank and served on the board of directors until the bank was purchased by Wells-Fargo National Bank.

Always a strong advocate of education, Port served on the former Orange Glen School District Board and was appointed to the San Diego County Board of Education in 1963, and then was reelected six times, serving for thirty years until 1993.  As a leader on the board, he was instrumental in developing the Adopt-A-School program and was honored at the White House in 1983 for his leadership.  Other Escondido and area organizations that benefitted from Port’s interest and expertise include: Escondido Chamber of Commerce, San Diego County United Way, San Diego Better Business Bureau, Alcohol and Drug Abuse Prevention Task Force (ADAPT), Escondido Boys and Girls Club and Hospice of Escondido.

Jack Port, an Escondido High School product, a successful local businessman, a dedicated leader in Education, a tireless community servant and an unassuming Hero of the Greatest Generation is a 2020 Escondido Forever Legend.