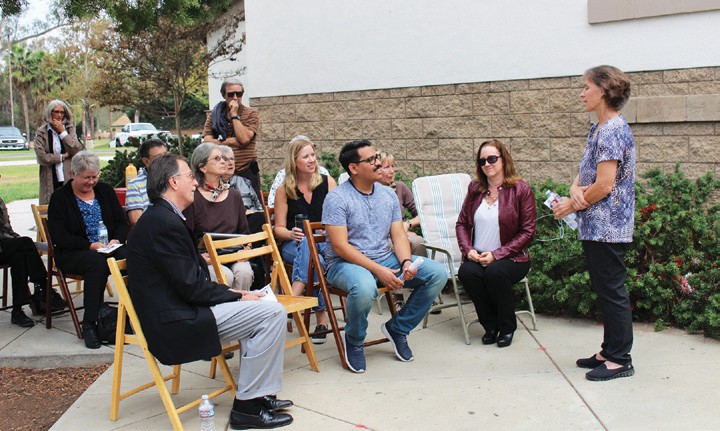 Alexa Clausen speaks shortly before the unveiling of the sign.

For many years a stately adobe in what is now Kit Carson Park was a landmark in what was then the small town of Escondido. In time the adobe was abandoned, and eventually all that was left was a chimney. Today what remains is a monument of stones from that chimney at the base of the park’s flagpole.

On Friday morning the Escondido History Center held a dedication of an interpretative sign called “A Chimney in the Park” that takes visitors back to the early 20th century and beyond.

Stacey Ellison, the executive director of the history center, introduced Alexa Clausen, Escondido History Center volunteer and a member of the EHC Interpretive Sig Committee, who read remarks on the “Chimney in the Park,” and why it is a reminder of Escondido’s past.

Clausen read the remarks reproduced in their entirety below:

Presentation for Unveiling — A Chimney in the Park

Thank you everyone who has come this morning to unveil an interpretive sign, A Chimney in the Park. For several decades, until this morning, the base of this flagpole was to most park visitors, no more than an artistic undertaking layers of rough stone that served to hold a steel pipe. And, as we look around the stone work is a very small piece of material that co-exists within a very large park. All of us here, today, a handful of Escondido residents, know that the stone was preserved as a keepsake to represent an important part of Escondido’s history. These small objects held together a fireplace and chimney. The stones were once witness to families who gather around them celebrating victories, mourning setbacks and the passages of their lives. The fireplace in turn graced the parlor of an adobe home. The home itself was the center of thousands of acres of farmland. This surrounding area was a community of people where they contributed to Escondido’s agrarian past.

So how did this chimney end up in the park? We have travel to the time when this area undoubtedly had been home to a Native American village. The fresh water springs that feeds the adjacent pond and the nearby San Dieguito River made for a rich location for the Kumeyaay and Luiseño Indians. But after the establishment of the Spanish missions, the Padres of Mission San Diego set aside this land for grazing and they named their land Rancho San Bernardo.

As time passed, these missionaries came under the government rule of Mexico, they abandoned the grazing land and gave up the rights of 17,763 acres to Joseph Snook in 1842. Captain Snook, an English mariner had been involved in several economic undertakings. He came to California in 1830 as master of a merchant ship and married a San Diego native, Maria 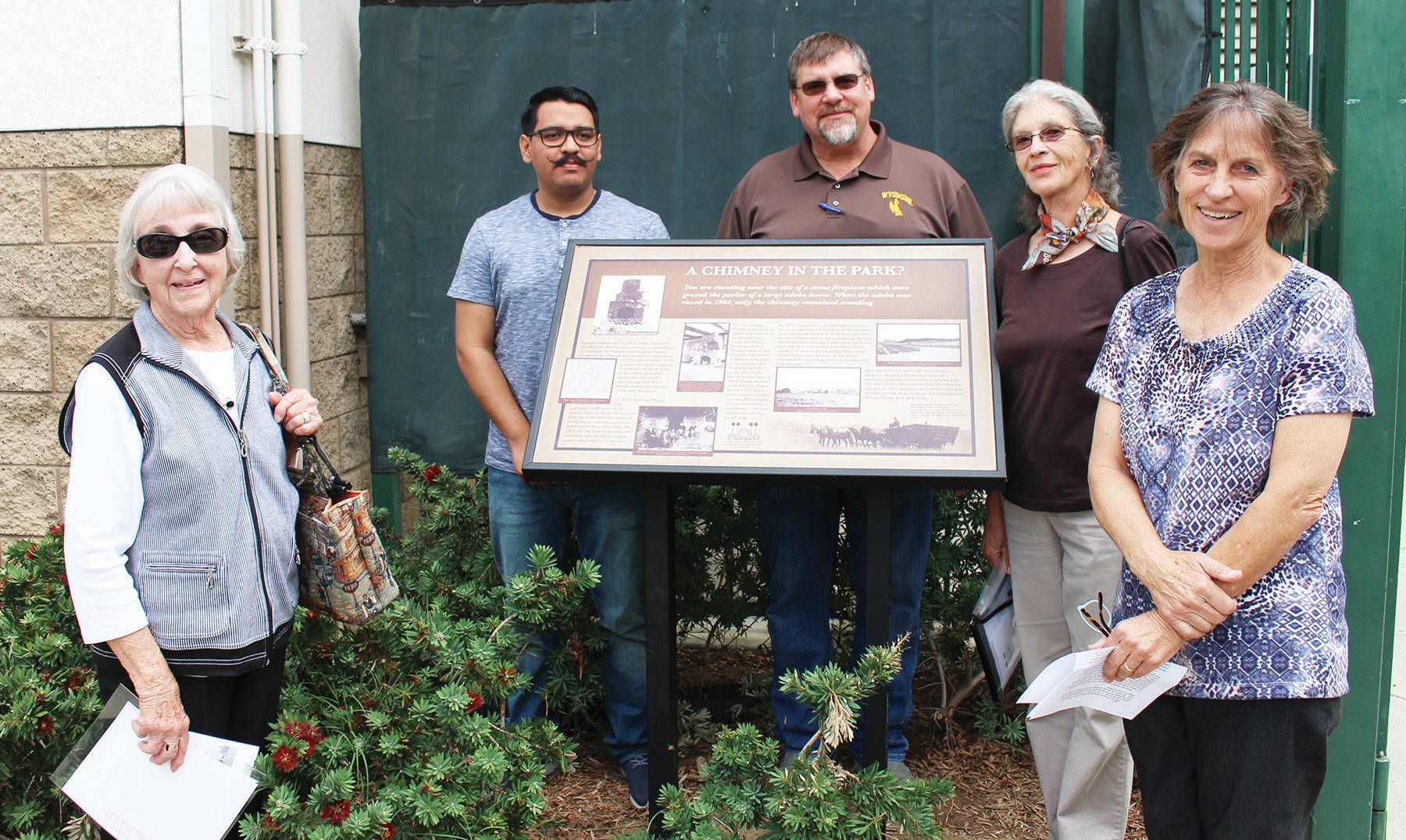 Posing with the new “A Chimney in the Park” interpretative sign are (from left) Ruth Collings, Carlos Tirado, Dan Young, park superintendent, Julie Johnson Lavelli, a Porter granddaughter (the Porters being the family that donated the land for Kit Carson Park to the city) and Alexa Clausen, who spear-headed the effort to install the interpretative sign near the flagpole of the park’s main building complex.

Antonia Alvarado. After his death in 1848, his heirs in England sold the ranch to land investors.

One of these investors, Omar Oaks purchased 4,400 acres which was about 1/4 interest of the northern portion of the Rancho. It is assumed that the Oaks adobe home was built sometime in the 1870’s. The adobe house was right here where we are standing. Omar, and his wife Mary lived alternatively in Santa Clara and here in this area called, Bernardo. Oaks often left his young son, David to manage the ranch. The land was primarily used for dry farming of wheat, oats and barley. In time, David purchased his own farm land from his father.

By the turn of the century, another son, Oliver, managed the remaining property. At this time, the home was described as being surrounded by orange trees with a shaded driveway having an “air of comfort and beauty.” When Omar Oaks died in 1905, son Oliver sold the adobe and 2,350 acres to George Prentice, a retired inventor and manufacturer.

Before moving his family into the adobe, Prentice enlarged and modernized the house. In 1917, he wrote to his daughters “I am planning to take the granite from the big stone hill and build a big open fire place to burn logs.” He went on to say he had pipes built into the fireplace so water could be heated by a fire built there.

When the Prentice family moved to San Diego, they leased the property to Dr. Herbert Porter and his wife Julia, who was a recognized artist. Dr. Porter had worked for the U.S. Forest Service mapping preliminary boundaries for all the national forests on the West Coast. In an interview, their daughter Ethel Porter Johnson said that “ Father was looking for pasture to keep horses . . . she remembered that a long drive, lined with tall cypress led to the house. Wainscoting covered the adobe, and yellow rose bushes, and an ancient purple wisteria covered the wooden veranda which surrounded the house on three sides.” The Porter family lived on the ranch from 1928 until 1940. A treasure trove of photos of the ranch were donated to the Escondido History Center by their grand daughter, Julia Iavelli.

In 1935, Lawrence R. Green purchased 1,700 acres of the Prentice ranch. He planted a citrus grove and subdivided the rest. The adobe would be used as housing for ranch personnel. Ruth Collings interviewed Lillian Rowe, whose husband worked for Green and lived in the adobe from 1941 until 1943. She said “I remember the adobe walls were so thick that I could stand on the ledge outside the windows when I had to wash them.”

Mrs. Rowe described this area as it was in the early 1940s. She said the barn and tack room were where 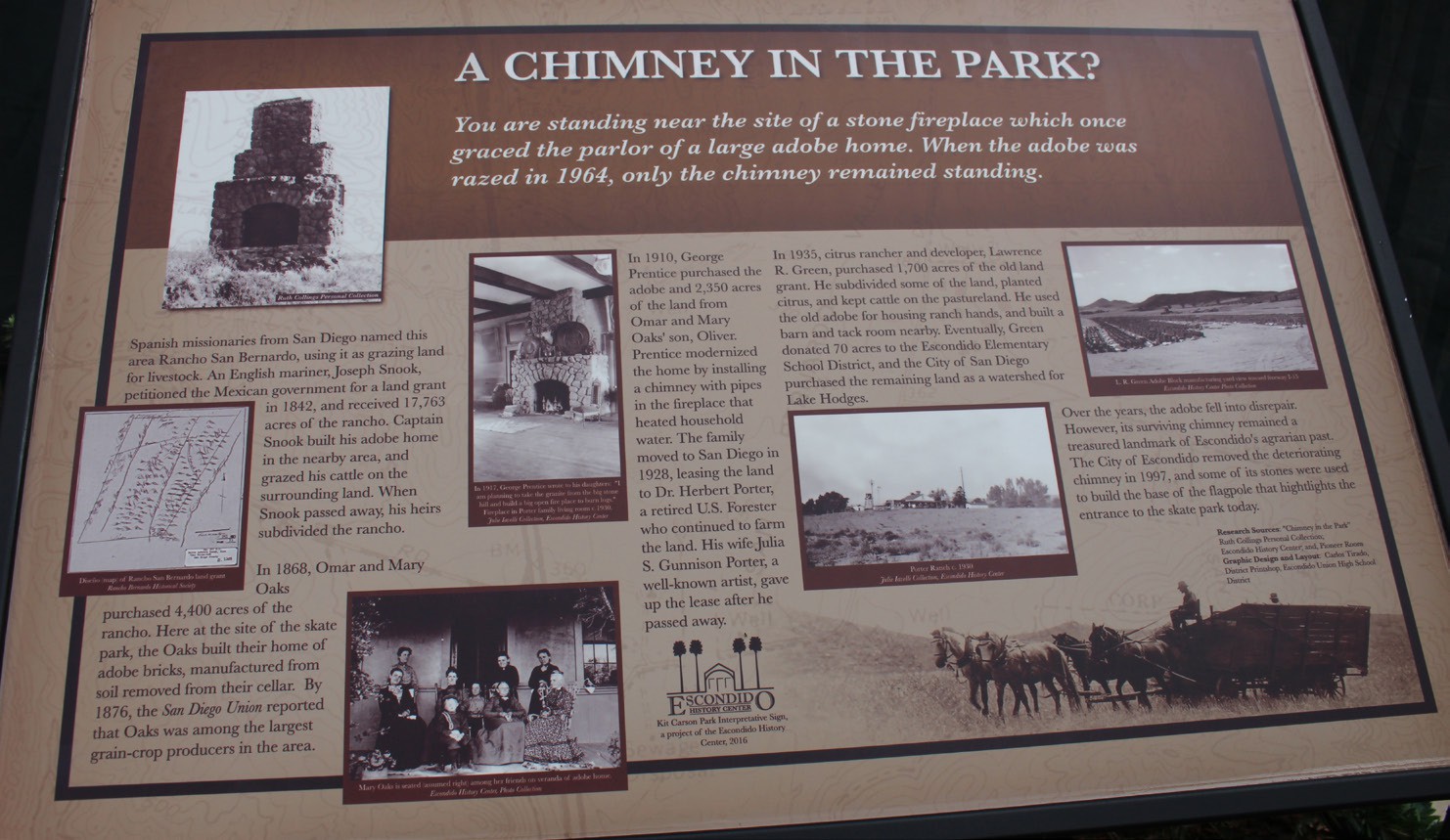 the amphitheater is now, and San Pasqual High School stands on what was pasture land. The land to the north– Bear Valley Middle School was planted with alfalfa. And, years later, adobe blocks were manufactured on the part of the Green ranch where the Westfield Shopping Center now stands. Green donated

77 acres to the Escondido Elementary School District and the rest of the ranch was purchased by the City of San Diego for the Lake Hodges watershed.

By the 1960’s, the adobe had already stood empty for several years so it was demolished except for the chimney. The chimney became a local landmark, but in order to make way for the skate park, the chimney was torn down in 1997. Local historian, Ruth Collings authored a paper entitled Chimney in the Park. It is to Ruth we owe a debt of gratitude. Through her research and documentation, the chimney, now a part of the base of this flagpole, it is not forgotten.

With the installation of this interpretive sign, we know that our young generation of Escondido residents will stop here, and no longer bypass a row of stones on the base of this flagpole. They are given the opportunity to know they are walking on the ground of many other in the past who contributed to form a thriving City. It is this small preserved structure, made of mortar and stone that tells a bigger story that links the past with the present with the hope of more preservation in the future for Escondido’s last remaining artifacts.

Clausen blamed her dogs for getting her involved in this project. She was hiking through the park one day with them when she found shards of adobe near the flagpole. She had heard of “The Adobe” and knew that it was at that location. She spoke to a park employee who told her that the chimney, which stood by itself for several decades as a landmark, was near what is currently the Snack Shack.

Some of the stones from the chimney were used at the base of the flagpole. After her presentation, several members of the audience reminisced about their youth in the park. Several people recalled going shooting there with their .22’s. Others remembered racing their dune buggies in the park, and drag racing on Bear Valley Parkway.

City councilmember Ed Gallo spoke of “the importance of embracing the history of the city. It’s not that old, but we have a lot of history. Things like this remind us of the rich history that we have.

Bob Oaks, who is a descendent of the Oaks family that once owned the property, noted that his great-grandfather owned thousands of acres.

Barbara Robb, who also grew up nearby, remembers being told that in the “old days,” that it took a farmer a full day to reap a wheat field with a team of horses.