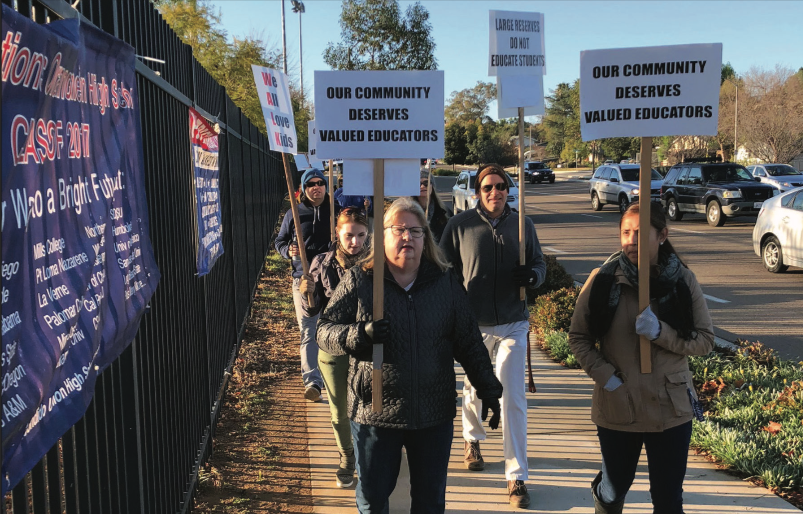 Despite a chilly morning, Orange Glen High School teachers Pam Whiting, Bill Turek and Griselda Resendiz lead a line of picketers along Bear Valley Parkway before school on February 28. Teachers have picketed at their school sites before school, hoping to make parents and community members aware of the ongoing contract strife between the teachers’ union and EUHSD

Since September the Escondido Union High School District and the Escondido Secondary Teachers Association have been unable to reach an agreement on the teachers’ contract despite 12 negotiating sessions.

Olga West, assistant superintendent of human resources, told the Times-Advocate: “We’re looking at offering something that we feel is fair as well as fiscally responsible for our district. That’s the key, making sure we are within the confines of the dollars that we received. Many are restricted or are to be utilized for specific purposes.”

West said, “We’re using two professional development days and we increased the salary schedule for 1% and they are working an extra two days for that. They don’t consider that a pure raise but it is compensation.”

Tom Gabriella, president of the teachers’ union explained why this is not acceptable to his members.  “After 12 negotiation sessions we remain apart and unable to close a deal because of our professional development days and whether or not they are using one-time funds or ongoing money to pay us for them,” he said.

“Last year the teachers union agreed to work two additional days for one year. The teachers’ union is looking for a 2% raise and the district has countered that the two additional days they worked should count towards –1% of the 2%  —- instead of actually including a cost of living raise of 2%,” he said. 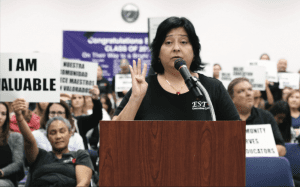 Opposing the current contract proposal, Escondido Secondary Teachers Association secretary, Mae Fey, takes the floor at the Escondido Union High School board meeting on March 6. More than 100 teachers attended to voice their disapproval over the current negotiations process between the union, ESTA, and the district.

If the union and district continue to not close a deal they could officially reach “an impasse,” at which point a mediator would be brought in to try to bring the two parties to an agreement.

“That has been the modus operandi” for the last few years, said the union president.

Currently the union members are picketing, which, said Gabriella, is a precursor to an impasse.

There is no deadline to reach a deal. “We like to be done with our negotiations during the school year and we hope that we can do that,” said West. “We are working on a one year agreement, but we are open to a multi-year contract,” she said.