Hey, somebody, anybody! Tristan MacMahon can play 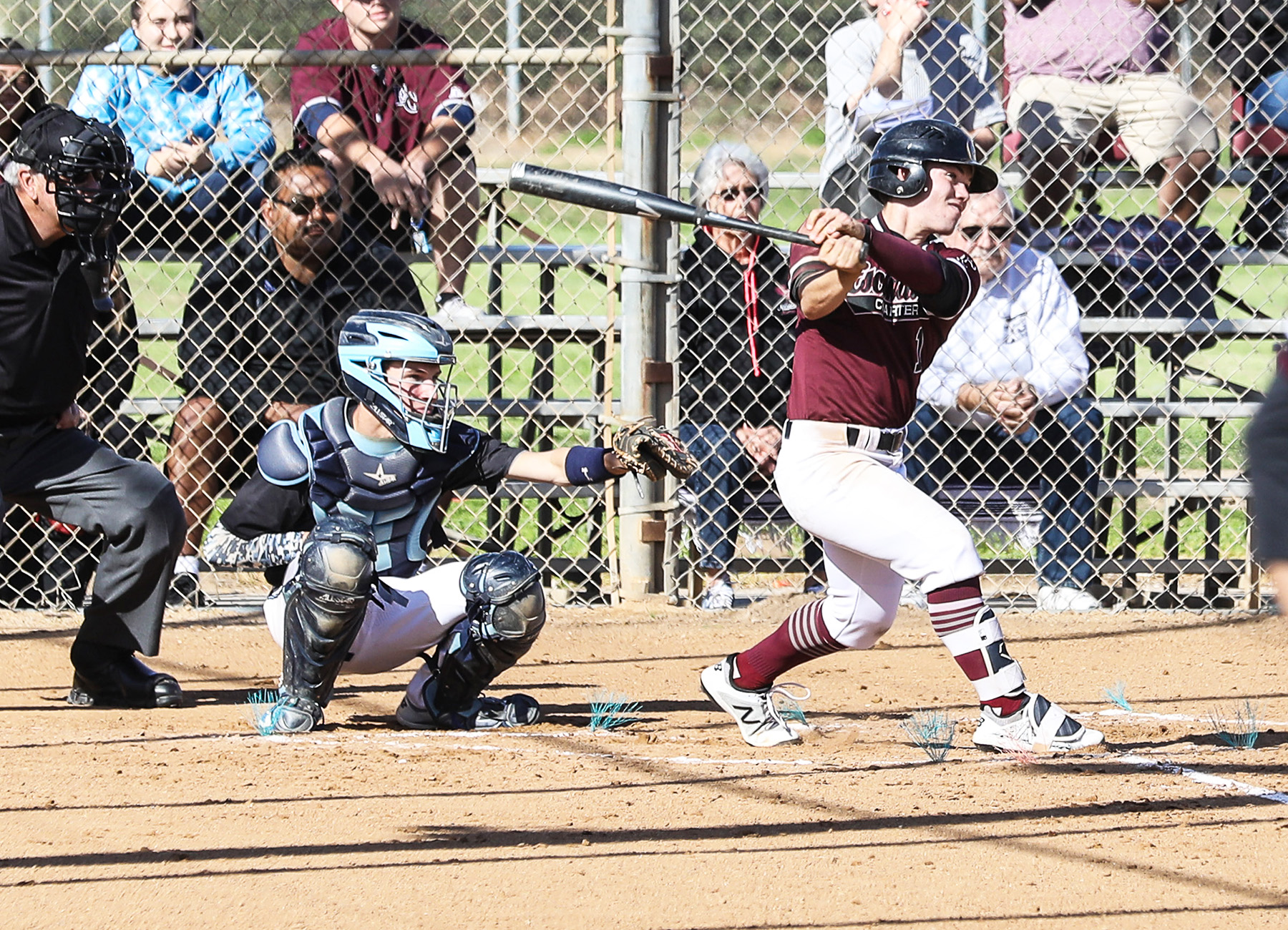 Tristan MacMahon was an all-around standout during his time at Escondido Charter. He now hopes to show his talents at the collegiate level. Photo by Lenny Kerbs

When it comes to baseball, Tristan MacMahon has the goods and then some.

A multi-dimensional player, the 2018 Escondido Charter grad has an enviable skill set. To begin with, he’s an assertive contact hitter capable of raking for a high average. And as the possessor of a keen and selective eye, MacMahon has turned getting aboard via walks into a real asset.

Imbued with good speed, MacMahon can drive a pitcher to distraction with his ability to steal a base or unexpectedly stretch what looks to be a sure single into a two-bagger.

On defense, Tristan can be a ballhawk, tracking down shots to the outfield while covering plenty of real estate. As for his arm, it’s both serviceable and accurate.

And oh yeah, if needed, MacMahon can take to the bump and become a pitcher quite capable of getting outs.

Last year in his final season with the White Tigers, MacMahon led EC in plate appearances, runs, OBP (.511) and stolen bases while finishing second in the categories of average (.387), hits, walks and OPS (.964). His ERA of just 1.17 in seven pitching outings wasn’t too shabby either.

When you watch MacMahon compete on the diamond, he easily passes the eye test. In many ways, he appears to be a natural who’s born to play the game.

So when all of the above is taken into consideration, imagine my surprise if not shock to find out that MacMahon, clearly a talented player, wasn’t even on a baseball team this year. Say what?  How can that possibly be? This kid’s got way too much going for him not to be competing somewhere – at some level with some program.

As this realization began to take hold, I felt a profound sense of disappointment for this likeable young man. It is an absolute injustice that his diamond gifts aren’t being currently honed, utilized and developed.

But then like a bolt of lightning, it hit me. In all probability, it’s a prime reason why MacMahon isn’t on a collegiate roster having the chance show his stuff. Hard as I tried to dismiss it, this was the hulking elephant in the room that couldn’t be ignored. And it speaks to a bias and prejudice that still manifests itself repeatedly in today’s world of sports. Though insidious in its own way, it’s a disturbing partiality that continues to be perpetuated.

To what I allude is a height, size or measurable bias. Too often if an athlete doesn’t have what coaches, evaluators, scouts, etc. deem to be a requisite physical stature, then they’ll be fighting an uphill battle to get a legitimate chance to compete somewhere along the line. The sporting landscape is awash with promising and dedicated athletes who because they may have been on the smaller side, never got an equal shot to reach their full potential. Instead of objectively evaluating their hearts, accomplishments and mental makeup, they were judged, to a very real extent, by a rigid and narrow standard – what they looked like and what was their potential for further physical growth.

Which brings us back to the dilemma that MacMahon is forced to confront, perhaps even more so than others considered to be on the diminutive side. Listed at somewhere around 5-4 and weighing approximately 140 pounds, there’s no denying that Tristan is vertically challenged in the eyes of those seeking out prospective talent. And while perhaps even acknowledging his notable deeds as a prep, they probably think of him as nothing more than a mighty mite with dubious upside as a collegian. In all likelihood, their consideration of him as a candidate for recruitment comes to an end right then and there which amounts to a damn shame.

Because given a bona fide shot, I believe MacMahon could and would succeed. I don’t profess to be an expert at assessing talent but I’ve seen enough ball to know that this young man could get it done if he found the right landing spot be it at the juco, NAIA, Division II or III level. Hell, it wouldn’t even surprise me that if the circumstance was ideal, he could even make a dent at Division I.

MacMahon has so much going for him as a player. He is as competitive and motivated as they come. Smart and instinctive, he clearly has a feel for the game. And very few are able to maximize their athletic gifts to the extent that he can. When observing him in action, you soon forget about his limited stature and instead, focus on all the intriguing positives he brings to bear. In MacMahon, being small has proven to be an asset, not a hindrance.

In my mind’s eye I can envision some program, oblivious to stereotypes, plugging him in at the leadoff spot and then delighting at how his reduced strike zone would drive opposing hurlers –please pardon the pun – batty. And then when those frustrated pitchmen are compelled to guide the ball into that limited space, MacMahon will gladly eat their lunch and spray the horsehide all over the yard. Trust me that vision could easily become a reality if things should shake out in his favor.

For now, MacMahon stays connected with the game by serving as a coach at his alma mater while taking classes at Mesa College. He did have a brief flirtation with San Diego City but that didn’t work out because the team wanted him to redshirt, an option that on the surface seems somewhat curious for a variety of reasons.

But hopefully by this time next year, Tristan MacMahon will be back in uniform at a place where he’ll be fully appreciated as a unique talent who knows better than anyone else how to play a big-time brand of small ball.