He’s back – Brose will again guide the White Tigers 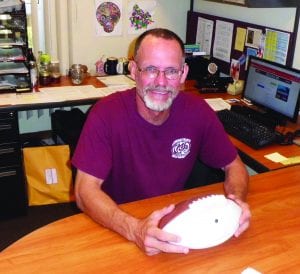 Sometimes in life it’s fascinating to watch as what goes around comes around.

Case in point, Escondido Charter High School. In an attempt to move the football program forward and tap into a different dynamic, the school is reaching back to the past. After a four-year absence from the sidelines, 53-year old Greg Brose is returning to the role that he effectively held for seven seasons, that being the head coach at ECHS.

Brose is intent on bringing stability to the position since he will be the third coach that the White Tigers have played for in past three seasons. After three years on the job that ended in 2015, Mark Carlson elected to go home to Colorado Springs and busy himself with the challenge of starting a new program there. Last season it was Chris Bonta who was tasked with the job of leading EC, but after a 2-8 campaign and for what probably can be best described as philosophical reasons, the school’s administration decided to go in another direction and make a change. Its search didn’t last long because it was determined that the most qualified and equipped candidate to handle the job was none other than Brose, who happened to be very man that oversaw the program from its actual inception.

And make no mistake, this is no transitional or temporary fix. Brose is coming back for the foreseeable future. “I’m really excited about this opportunity,” he says with a gleam in his eyes. “and believe me, this is a long-term commitment.”

Though the Brose approach/philosophy is wide-ranging and extensive, its core is based on the acronym FIT – fundamentals, instruction and teamwork. There will also be heavy emphasis on the development of each and every player, regardless of standing, stature or class. Goals will be set and the growth and improvement of all of his charges will be closely monitored.

Moreover, the organizational aspects of the program will be intensified and given a high priority. And finally, Brose insists that EC will get down to the basics. “As a team, we’re going to do the little things well,” he explains, “because if you don’t get it done there, the big things won’t ever happen.”

Greg Brose’s varied background is one that suggests he is the right fit for the White Tigers at this precise moment in time. He was an accomplished athlete at San Pasqual High as both a lineman in football and as a wrestler. However, Brose’s grid career came to a premature end when he suffered a knee injury while playing at Palomar College.

Eventually, he found his way to Escondido Charter where over the years his many roles have included being the White Tigers’ athletic director, head football and wrestling coach.

Starting a football program at the high school level is an extremely daunting undertaking and that responsibly fell on Brose’s shoulders in 2006 when EC took the plunge of participating in the most visible of prep sports. By design, that inaugural season saw the White Tigers play a tamped down schedule that would allow them to ease their way into the football culture. By the next year, Brose had impressively nurtured his squad along and EC finished with a solid 4-5 record.

And then in 2009, the White Tigers produced a notable 8-3 slate which signaled their emergence as a bona fide force in the Pacific League for three years running.

But after the 2012 season and having invested seven years on the job,  Brose elected to step aside and give the whistle to someone else. Candidly, he does admit to having experienced a slight case of burnout but the main reason for his departure was that he felt it was a time to reassess his priorities. A spiritual man, Brose felt he was being called at that particular season of his life to reinvest and spend more time with his three children. And he also wanted to totally focus on his duties as Charter’s AD. “Sometimes it’s not all that easy trying to wear multiple big hats,” Brose admits.

But when the opportunity presented itself to once more take charge of Charter’s football fortunes, Brose didn’t hesitate. He felt as if the game was truly beckoning him to return. And based on his extremely positive and upbeat attitude, there seems little doubt that Brose is coming back an energized and highly motivated coach who’s looking forward to connecting with the young men that he will have the chance to mentor and mold.

The prospects for the White Tigers to immediately improve and take a step up under Brose’s direction appear to be quite promising. To begin with, after making wholesale changes in the assistant coaching ranks, Brose believes he’s assembled a solid staff of both experienced veterans and an up-and- comer who possess the technical knowledge and dedication to get the job done.

The returning coach is also anxious to see how proficient his team can become when using the pistol spread offense: an attack that creates tempo and space and can provide a nice balance between the pass and the run. Brose thinks he’s got the components to make it work with such weapons as the speedy MacMahon, sophomore quarterback Georgiy Begaliyev and gifted receiver Shane L’etoile.

Moreover, Brose thinks his 4-2-5 defensive scheme is one that could prove to be effective as well with impact players like the athletic Hansen and physical Aaron Bolas upfront while mainstays such as the instinctive L’etoile and the versatile MacMahon will man the back-end.

In the recently completed passing league competition, Brose got a sneak preview of his team’s potential and liked what he saw. In addition to showing a collective competitive mindset, the team’s quarterbacks demonstrated real improvement with their reads while the defensive coverage was very consistent. Those are definitely encouraging signs upon which to build.

Goals for the upcoming season include having a winning record and for the outgoing seniors to finish on a highly positive note. Brose gives off the vibe that he’s a guy that can help turn those goals into a reality. And just listening to him, you get the sense that he can’t wait for the preseason practices of August to commence so that he can roll up his sleeves, get to teaching and motivating and begin to put his imprint on the White Tigers of 2017.

“I’m really looking forward to seeing how things come together as a team,” says the coach. “I think we’ve got a good core of athletes and the guys have been working very hard. And I believe our strength and conditioning is really improving. I’m genuinely pumped about where we might be headed.”

And so are those who follow the program closely, whether they’re parents, alumni or just fans. Greg Brose is back – seemingly better than ever – and from all indications, he’s ready to put some real growl back into the White Tigers.