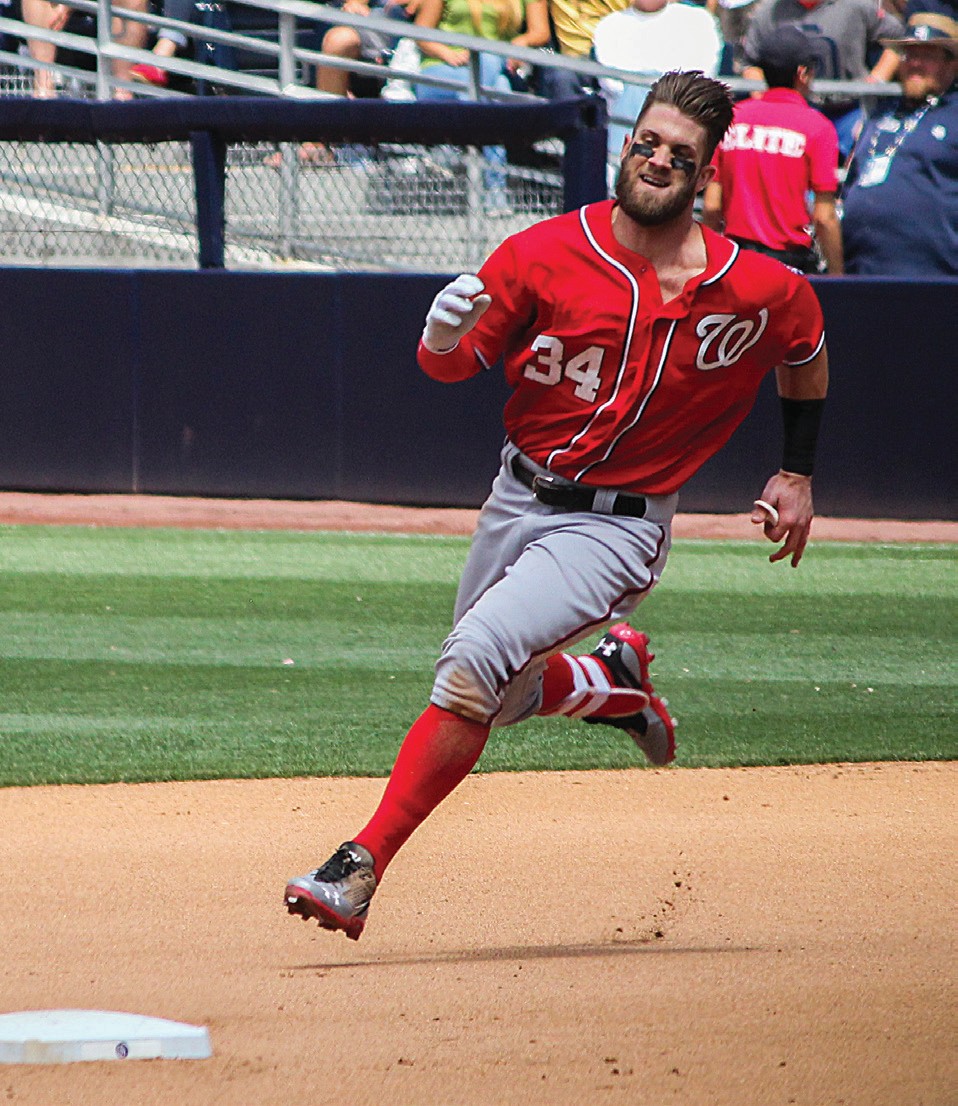 For some time now, a storyline that has been circulated by lemming-like reporters and fans across the country is that Washington Nationals outfielder Bryce Harper is destined to become an all-time great and a surefire Hall of Famer.

To these Harper honks, it’s already a done deal and a virtual lock that the bearded 23-year-old, who once graced the cover of Sports Illustrated before he even turned pro, will become an immortal and will end up as a titan of the sport like Ruth, Aaron, Mantle and Mays. There is absolutely no doubt in their minds that he will become a historic, if not a mythic figure.

To which I say, a big fat Whoooaaa! to such premature talk, speculation and projection. This rampant Harper hype is not only getting out of hand, it’s becoming extremely annoying because it isn’t all that rooted in either deed or fact.

The push to already place Harper among the pantheon of legendary ballplayers is a sad reflection of the inclination to rush to judgment and get caught up in the flavor-of-the-month mentality. In today’s microwave world, no longer is an athlete required to prove his worth over an extended period of time to demonstrate his greatness. Longevity has seemingly become a bad word and to many, an irrelevant consideration.

Hell, just get hot for a few months and generate some headlines or put together a stellar year and much of the media will tout you as a star and someone for the ages. Snapshots seem to carry more weight than an extended portfolio. It’s become all too much about the present and what’s happening right now as opposed to evaluating a story in its totality.

Which brings us back to Harper. There can be no argument that he’s a splendid and talented player. Hard-nosed and aggressive, he generally does his thing on the diamond with admirable commitment and passion. He does emit a vibe of arrogance and entitlement that this reporter finds off-putting but countless others don’t seemed troubled by this attitude.

Last season, the one-time wunderkind experienced a banner year, justifiably winning the National League MVP award. The left-hand hitting Harper finished his breakout campaign with a scorching .330 average and paced the N.L in homers (42), runs scored (118), OBP (.460) and SLG (.649). Those are numbers certainly worthy of high praise and acknowledgement.

But it was after all, just one season. Basically it amounted to a snippet in time, hardly a long-distance race. In the three years prior to that, Harper never hit over a middling .274. His home run (22) and RBI (59) bests during that period, though sufficient, weren’t exactly overwhelming either.

So if Harper really is the untamable beast that his advocates vigorously claim him to be, wouldn’t you expect him to build on the momentum of 2015 and continue to produce big numbers across the board? Ah, not so fast! Because the Harper Express supposedly headed towards glories unrivaled has gotten somewhat sidetracked. The can’t-miss and no-doubt HOFer is hitting a lackluster .256 as he heads into the All-Star break. Wow, now that’s what I call some serious raking! To be fair and balanced (thank you Fox News), Harper has driven in 52 runs and leads the league in walks with 70 and those stats should not be dismissed. But earth shattering they’re not and it says here that when this season has run its course, Harper’s stat line will show definite regression and decline from last year.

Moreover, based on what preceded and has followed it, the case can be made that what Harper achieved in ’15 isn’t going to be the norm but rather it was an outlier season when everything came together. Thus far, in four of his five seasons in the nation’s capital, Harper has been solid- to-good but so removed from being great it’s not even worthy of discussion.

So let’s get this straight. As this is being written, Harper has a Mother lode of work to do before he’ll rate as even a prospective great. Given his obvious skills and athletic attributes, it would be foolhardy to suggest that it’s an impossibility for him to someday become a baseball icon. But based on past performance, the likelihood is that probably isn’t going to happen.

No matter which side of the argument you fall on, only the passage of time will signal whether Harper should be worthy of legendary status.

But for now, all those that seek to place him high on a pedestal need to back off and pump the brakes. You’re not only overreaching, you’re assigning to him credit that he hasn’t yet earned. Just let things play out and eventually your faith in him will either be rewarded or will be shown to have been misplaced.

Just please quit with the hype and exaggeration because at this stage, it makes no sense and is nothing if not laughable.