“Hacksaw” continues to bring it 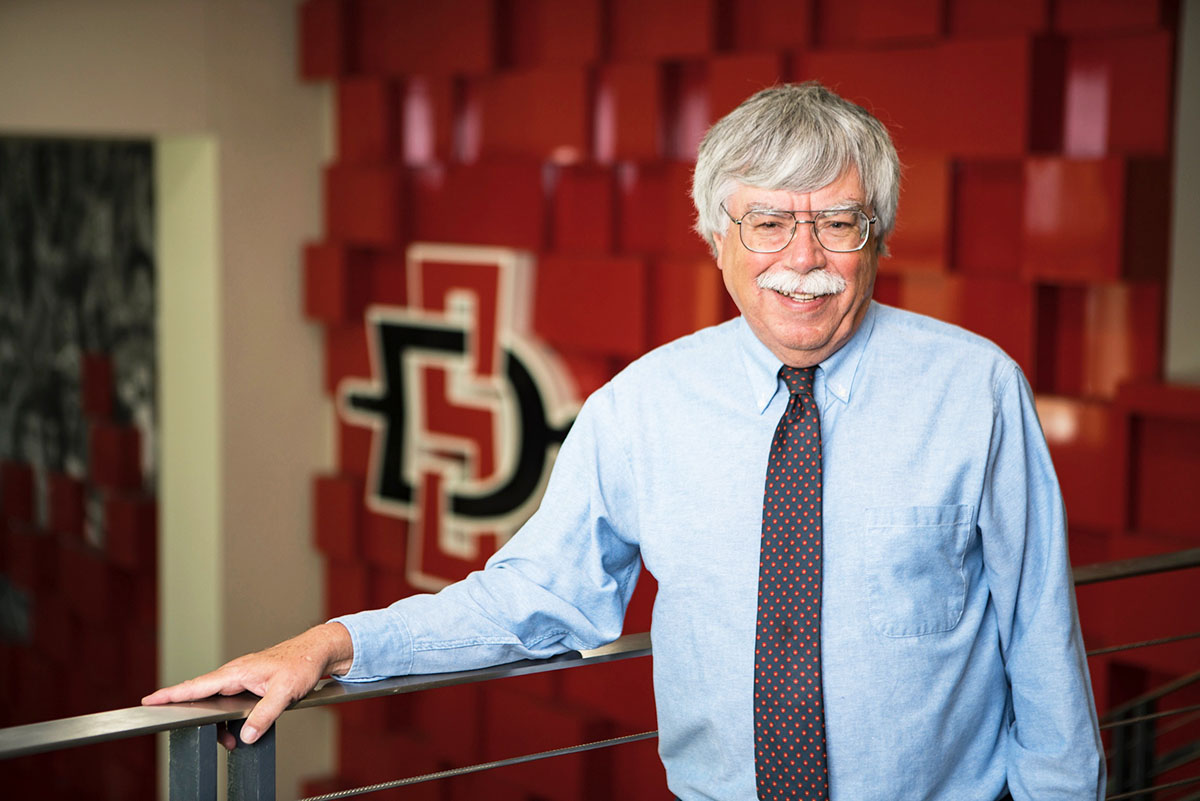 When it comes to sports-talk greats, Lee “Hacksaw” Hamilton need not take a backseat to anyone.

This is the first of a two-part article on a renowned sportscaster.

When privileged enough to have the chance to sit down and converse with Lee “Hacksaw” Hamilton, the significance of the moment is not lost on you. He has been one of the true titans of the sports-talk radio industry, an honest-to-goodness superstar behind the mic.

Revealingly, the longtime North County resident still looks damn good, some of that the result of having spent plenty of mornings working out at the 24 Hour Fitness located at Escondido’s North County mall. The signature mustache and Prince Valiant haircut remain very much in evidence, although grey can now be liberally found in both. And then there’s that rich and recognizable voice, the one that dominated the Southern California airwaves for what seemed like forever.

There was an extended period of time when Hamilton’s shows were can’t-miss radio, with his cutting-edge “Hacksaw’s Headlines,” his legendary catchphrases, his vast and breathtaking knowledge and the manner in which he never shied away from stirring the pot. No one brought as many tangible assets to the table as did Hamilton and his undeniable success and connection with the public were testament to his status as a kingpin of his chosen genre.

And lest anyone forget, Hamilton’s sizeable talents were hardly confined to his talk show duties. A gifted and animated play-by-play man, Hacksaw had notable runs as the voice of such teams as the San Diego Chargers, the Seattle Seahawks, the SDSU Aztecs, the ASU Sun Devils and, a drum roll please, the Cleveland Crusaders of the World Hockey Association. Say what? Now be honest, how many of you knew that Hacksaw had done puck in the past and was quite adept at it?

So when someone of this magnitude and repute isn’t currently being heard on radio, it leaves a huge vacuum and calls into question the wisdom and sagacity of those in the three-piece suits that make personnel and on-air decisions. In other words, the misguided lunkheads who don’t know beans about what’s viable and seem hell bent on proving that shortsightedness and stupidity are somehow virtues. Just listen to some of the dubious, mundane and bland sports talk shows that can be found in today’s SoCal market – many of which carry ratings that are buried deep in the crapper – and can anyone possibly make a legitimate argument that there’s no place for a personality and gamer like Hamilton? Please, but more about that later.

When Hamilton arrived in San Diego in 1986, he had already demonstrated the chops to do something unique, special and memorable in the broadcast industry. In various capacities, be it play-by-play or as a talk-show host, he’d left lasting impressions in places like Utica, New York and two locales in Ohio, Akron and Cleveland. And then Hacksaw moved onto Phoenix, Arizona where he took the “Valley of the Sun” by storm.

Never afraid to tackle controversial issues and challenge his audience, Hamilton immediately became as hot a commodity as the weather. With ASU then on probation and baseball out on strike, Hacksaw had some tasty subjects to dissect and so he “hit the floor running that very first night,” at KTAR with his thought-provoking and opinionated approach. The response was instantaneous and electric as the phone lines “lit up like a Christmas tree.” From that point on, Hamilton knew he had struck gold, having hit upon the mother lode. And after 51 straight days of labor at four hours a clip, Hacksaw had firmly established himself as a fixture on the local dial.

Moreover, his profile grew even larger as he doubled as the voice of Sun Devil football. At the very forefront of wall-to-wall coverage that featured pre and post-game shows sandwiched around the game itself, Hamilton was sometimes working on-air until well after midnight. But he thrived in this all-encompassing environment which tested his variety of skills and brought out the very best he had to offer. The template that Hacksaw and crew helped to popularize on “ASU Sun Devil Saturday” has now become standard fare across the country.

And then came his boldest and most impactful relocation of all. Lured by the enticing prospect of doing Chargers play-by-play, as well as being the linchpin of what would become one of the nation’s preeminent sports-talk stations (XTRA 690), Hamilton headed to “America’s Finest City” where he would become both star and icon.

On the surface, it seemed as if all the elements were in place for XTRA to take off and cut a huge swath in the radio industry. To begin with, the station was guided by a visionary GM in John Lynch, a man who was clearly gung-ho about the potential of the sports-talk format. Then there was that blowtorch of a signal that emanated out of Mexico and reportedly topped out at a stunning 77 thousand watts. When Hamilton proudly crowed that he could be heard “from Baja California to the Canadian Rockies,” he wasn’t blowing smoke.

Moreover, the timing appeared propitious and ripe because there was a vast, untapped listening audience just dying to get its fill of sports and all the fascinating and compelling sidebar stories that went with it.

But regardless of the consequential factors mentioned above, there was no denying that it was Hamilton who was the key component in making it all work. He was the centerpiece, the undeniable go-to guy around whom everything revolved. Hacksaw was clearly the one driving the 690 Express, all the while steering it towards both ratings and financial success.

His signature style was “colorful and emotional, always trying to paint a picture and give the listener as much information as I could find.” And his work ethic was unsurpassed, doing countless hours of research that would have made a law student cry uncle. Hacksaw was constantly consulting his handy super Rolodex, filled with countless names, sources and insiders from which he could get to the heart of virtually any story that was making headlines.

A naturally inquisitive sort, Hamilton was unlike others of his profession who exhibited a profound laziness in that they refused to broaden their horizons and talked almost exclusively about the Big Three of football, baseball and basketball. Not so Hacksaw, who would have felt unduly confined by such limitations. And though he delved into the major sports like no one else could or would, he reveled in covering the entire “waterfront” of athletic endeavor. Pursuits like hockey, golf, tennis, soccer, NASCAR and Formula 1 were given their rightful share of the spotlight and were never delegated to the short-shrift bin.

Hamilton saw his audience as a vast “melting pot” coming from everywhere imaginable and with innumerable interests not to be ignored. And as such he sought to hit every listener’s “hot button,” something that would trigger a response and keep them coming back for more.

Other examples of Hamilton’s all-inclusive philosophy were his much anticipated tours of the NFL and MLB training camps, thereby giving every fan the chance to get the inside dope on his or her favorite team.

The table-setter that kicked off all of Hamilton’s talk shows was his notable “Hacksaw’s Headlines,” a fast-paced and highly informative 15-minute rundown that covered the gamut of what was happening in the world of sports. People up and down the West Coast made it a virtual crusade not to miss this popular segment because it was a given that ‘Saw would get you up to speed on anything that was worth knowing. The incalculable many that got hooked on this slice of broadcast nirvana didn’t need to be convinced that this was must-listen-to radio at its best.

And you can’t think of Hamilton without recalling the marvelous quotes and catchphrases that helped to define him. Who doesn’t recall priceless tidbits like, “I am bleeping brilliant,” “Show me your Lightning Bolt,” “Reaction,” “Agree or Disagree,” and “Goodnight Now,” among so many other classics too numerous to mention here.

Indeed, while hoisting XTRA on his back and transforming it into a major player, everything appeared to be copacetic in Lee Hamilton’s world. But there was much more of his story yet to be told.

Look for next week’s part-two when Hamilton reminisces about an enjoyable television gig, some memorable sporting names and shares what he’s up to these days. Be sure not to miss it!

3 responses to ““Hacksaw” continues to bring it”