H Brothers specializes in comfort food: the kind you didn’t know you wanted 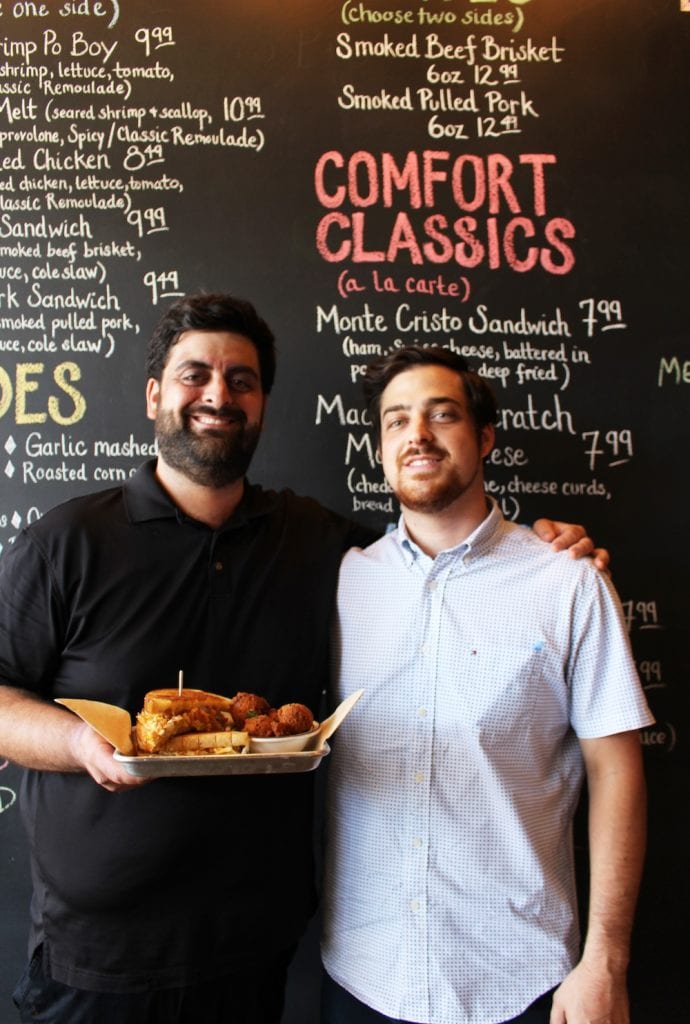 Justin and Nick Hedayati, the “H Brothers” with a plate the includes the Seafood Melt and a side of Hush Puppies.

Nick Hedayati, of  “H Brothers,” a restaurant in the heart of Escondido’s historic downtown on Grand Avenue, describes the type of cuisine he and his sibling, Justin, provide as “North American comfort food.” That takes in things like made from scratch mac and cheese, Fried Shrimp Po’ Boys, Pulled Pork Sandwiches and Poutine.

“Poutine?” You may ask. “What is that?” It is a French-Canadian dish of French fries—double fried so they don’t become soggy—covered in beef and cornstarch gravy and cheddar cheese curds. The recipe is mostly traditional, although as Nick says, “It’s between authentic and what people like.” It is essentially cardiac arrest in a bowl. And most delicious! But that’s what comfort food is all about, isn’t it? It’s not meant to prompt your doctor to congratulate you for your prudent dietary choices. It’s meant to taste goooood and leave your tummy humming with warmth and pleasure.

I’d always wanted to try Poutine, having read that it’s considered the Canadian national dish (I’m not automatically drawn to national dishes; I have no desire to try Norway’s national dish Lutefisk, for example.) It was worth the years of waiting. I could definitely see making Poutine part of my routine.

If you’re not French, but still like your fries slathered in something good, H Brothers offers a more downhome variation, made with white gravy, friend chicken bites, and the cheese curds.

Comforting and delicious, I would say. The brothers have spent a lot of sweat and money into transforming the former sushi place into a dining experience like no other along Grand Avenue. “We wanted to do things that they weren’t already doing on Grand Avenue,” said Nick; who joined me while I dined with my friend and real estate guru Morgan Brown.  “We like to think of it as food you didn’t know you wanted.”

Like the Seafood melt, made with white wine seared shrimp and scallops on sourdough toast, with provolone cheese on both sides. That’s what makes it a melt, according to Nick. Then finished with a classic remoulade sauce slaw. Which is made with mayonnaise, mustard, various Cajun and Creole seasonings and horseradish, among other ingredients. Zesty is the word for it.

People come in the restaurant from all over to try their Monte Cristo Sandwich, a sandwich that is getting harder to find. This classic is made with ham and swiss deep fried in pancake batter and served with pancake syrup. 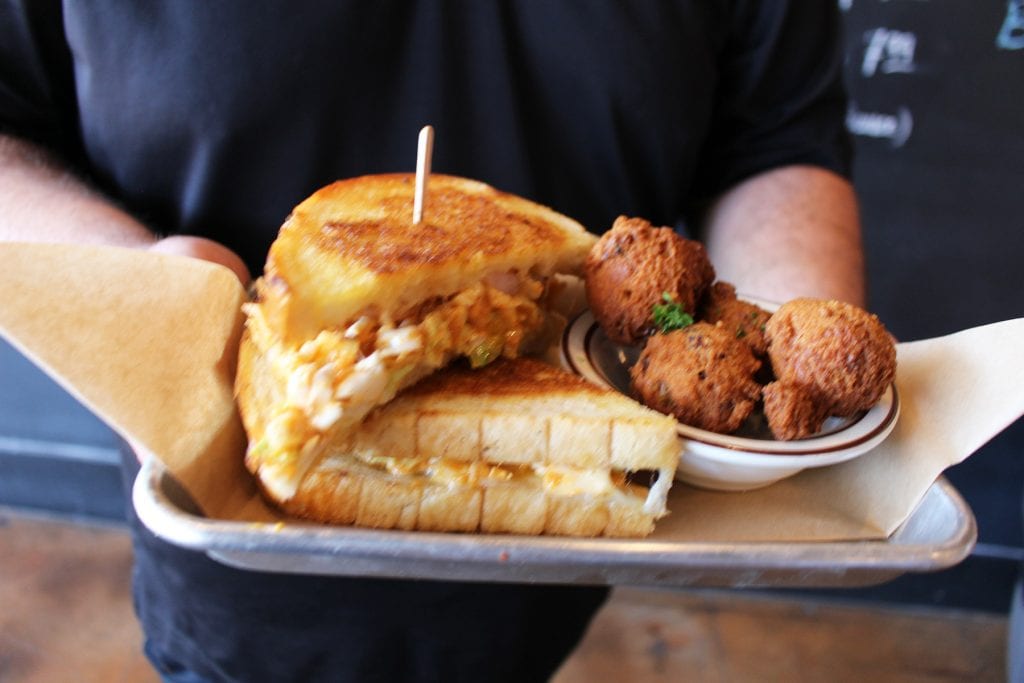 The Seafood Melt, a succulent creation of sourdough bread, provolone, seared shrimp and scallops topped with cabbage and French remoulade sauce. Tangy, rich and dripping with juices, this is a sandwich to definitely eat over the plate!

If the Hedayati name seems familiar, that’s because the family has been serving up Mediterranean cuisine at Chicken Plus for many decades. That’s the restaurant on Escondido Boulevard where you can see chickens roasting on open flames from the street, juices flowing down their sides, setting your saliva glands aglow.

“A lot of people know our restaurants and our family. It’s a local tradition,” said Hedayati. “We have a history of quality going way back. Everything is made here.”

The brisket for dishes such as the plates of smoked brisket is smoked for six hours. The pulled pork is made with similar loving care. Both meats are found on the growing list of sandwiches.

OK, so we’ve established that, even though H Brothers is a new restaurant that it’s not a fly-by-night business. The brothers are here to stay. although it took them two years of navigating the city’s regulations before they were finally able to open. The brothers did much of the interior themselves. They still put in a lot of work, about 60 hours a week apiece. But that’s not unusual for the brothers, who started working for their dad when they were in their early teens. Nick recalls buttering the pans for his dad’s restaurant when he was 6-years-old.

The menu is sort of a hybrid of the two sides of their family, the Cyprus heritage of their father and the Boston side of their mother. So, for instance, you have Tzatziki chicken wraps and clam chowder. When you add the Buffalo Ranch Chicken Wrap you have a healthy alternative, like spinach and tomato flour tortilla wraps.

The sides include cole slaw, garlic mashed potatoes, fresh cut fries, roast corn on the cob, hush puppies and onions rings that may be among the best in town. 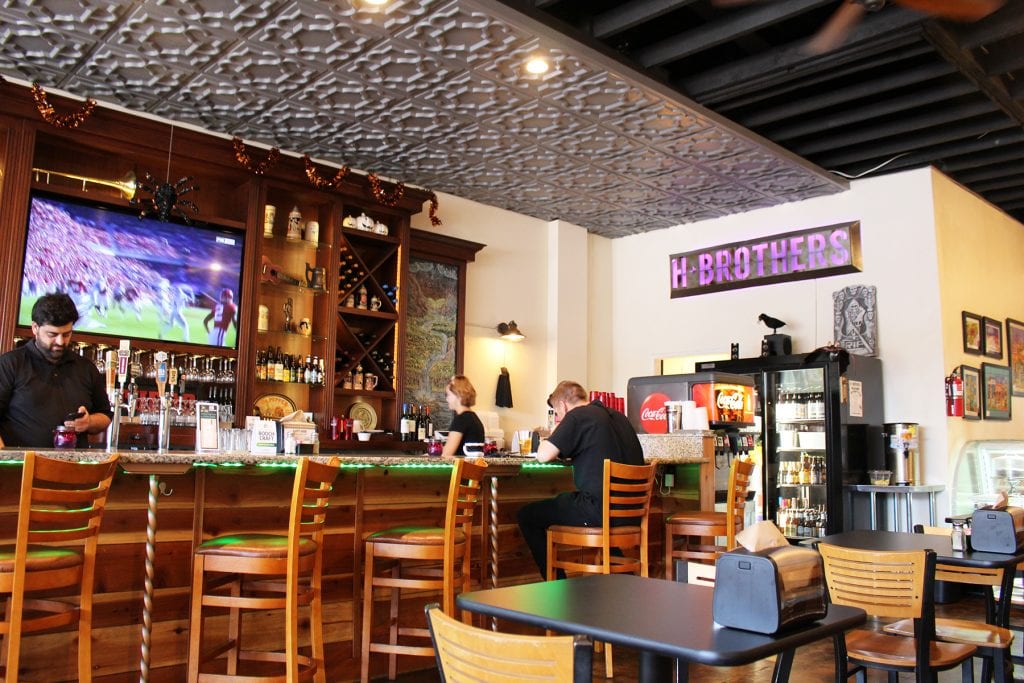 The menu at H Brothers is remarkable for the prices. As Nick puts it, “With some restaurants you pay a lot for a little. We have the experience to give you a great experience of craft comfort food. We’re trying to give you your money’s worth. We want you to be full when you leave here.”

They also have unusual desserts like beignets, root beer floats and Crème Brulee.

They also want to be part of what they both perceive to be the resurgence of Grand Avenue. “Grand Avenue is growing,” says Nick. “There is money coming to the downtown. We’re here to stay as part of the downtown economy.”

Effort seeks to put Escondido— and your business—on the map