Grindstaff, Hale lead the way in Sabers first win of the season 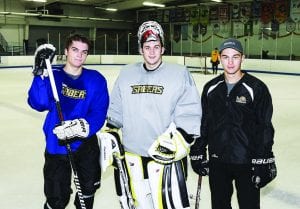 (From the left) Versatile Cole Parker and goalies Zach Hale and Matt Soldano are the lone holdovers from last year’s team. Photos by Lenny Kerbs

Sure, it was still very early in the 2017-18 Western States Hockey League season and there was certainly no reason to go into panic mode, but that didn’t negate the fact that the San Diego Sabers were in real need of a victory.

Having lost two games on the road to powerhouse Long Beach to kick off the campaign, the Sabers returned to the Escondido Ice-Plex this past weekend for a three-game series with the visiting Fresno Monsters (3-6). The Sabers were hoping that familiar surroundings and having the chance to benefit from some home cooking might get them headed in the right direction.

But at least through Saturday night’s game, that’s not how things played out. After a 5-2 loss on Friday, the Sabers were stymied again 6-0 the following evening when Fresno goaltender Adam Barvik nimbly turned aside 20 shots while posting a shutout.

But the real story of those first two Monster wins was the scintillating play of 5’10” forward Daylon Mannon. After registering a hat trick in the opening game, Mannon sizzled even more the following night when he lit the lamp a remarkable four times. Scoring seven goals would amount to a productive month for many players but the Fresno native Mannon required just back-to-back games to turn the feat.

Hence, the task was clear for the Sabers as they entered Sunday afternoon’s finale of the three-game set. The locals needed to tighten things up defensively, get some more offensive production and if all possible, keep Mannon under some semblance of control.

So when San Diego was able to take care of business on all three of those fronts, its 3-1 victory over the Monsters really came as no surprise. And based on the manner in which they embraced and hugged one another in the immediate aftermath of their first win of the season, it was obvious that the Sabers was both happy and relieved to get off the schneid.

The Sabers’ triumph was keyed by a pair of notable performances from right winger David Grindstaff and netminder Zach Hale. The 18-year-old Grindstaff showed that he can be a genuine sniper with a couple of pinpoint goals while Hale was outstanding between the pipes with a poised, technically sound and clutch performance that saw him produce 36 saves.

In the early going, the Monsters came out strong and carried the play, obviously intent on going for the sweep. But Hale made a trio of solid stops from in close to keep things scoreless.

And then in a flash, the tenor of the game dramatically changed. Collecting the puck from outside the red line, Grindstaff showed a good burst that allowed him to separate from two defenders and suddenly he was off on a breakaway. Closing in on the goal, he veered slightly to his right before whistling a ticketed shot past Fresno goalie Alexander Gamez. Grindstaff’s shot found the upper corner of the net and staked the Sabers to a 1-0 lead at the 13:16 mark of the first period.

And after Hale had repulsed a ripped wrist shot from Cory Hurtubise and then a tester from the point off the stick of Ondrej Gabrhelik, 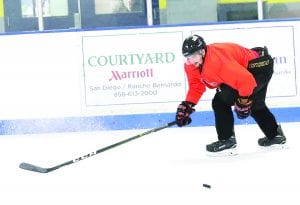 The talented Karel Kankovsky figures to be a force on the Sabers blue line during the 2017-18 season.

the Sabers were to strike again, this time making the most of a two-man advantage on the power play. Michal Kolarik, a fluid player who hails from the Czech Republic, gathered in the puck and quickly slid a sweet feed over to teammate Karel Kankovsky at the other point. Without hesitation, Kankovsky blasted away and his rocket of a shot clanked of the post and into the net behind a helpless Gamez. Now staked to a 2-0 margin as the first period ended, the Sabers were a team whose confidence was clearly growing.

Into the second period, Hale maintained his rock steady level of play by getting a piece of three challenging shots before it was time for Grindstaff to rise to the occasion once more. Controlling the disc along the left boards, he adroitly moved into the left circle before firing another highly accurate wrister that went top shelf. As before, Gamez was beaten cleanly and appeared to have no chance. At this stage, despite the fact that better than 25 minutes remained in the contest, the Sabers sizeable 3-0 cushion was beginning to appear almost insurmountable.

However, as they had all weekend long, the Monsters continued to hustle and grind and eventually their persistence was rewarded. As time was ticking down toward the second intermission, Logan Domagala sent a crossing pass towards the crease that was tipped. Suddenly, none other than the nemesis Mannon was right there to calmly tap it out of the air and into the net behind Hale. Yeah, it was a goal that was on the fluky side but it counted like any other score and gave the Monsters a real chance to get back into the hunt entering the final period.

But although the Monsters had the edge as it related to possession time in the last 20 minutes, Hale proved to be impenetrable. After deflecting an ice-skimming shot from Gabrhelik, the 19- year-old Saber goalie then came up with a huge save when he stopped a bullet from the point courtesy of Hurtubise. Down the stretch, other Hale highlights included a nifty blocker save on Adam Polomsky and an alert rejection of a spin shot from Riley Jones.

And while Hale was more than doing his share, he also got some invaluable assistance from a defensive corps that played physical, broke up plays and effectively cleared the puck out of its own end. Kankovsky and Kolarik were particularly efficient whether doing the dirty work down in low or quickly getting out on a rush. Biko Neuenschwander was another defender who stood out. Logging heavy minutes throughout the contest, the 5-foot-11, 165-pounder hustled all over the ice and played a reliable all-around game.

Forwards who were factors as well included Ondrej Imrich with his speed and stickhandling skills as well as winger Brad Larson and London Peters; each of whom registered an assist.

This off-season was one of monumental change for the Sabers as the highly-respected Tomas Kapusta took over the ownership and general manager’s duties from the affable Jim Cavataio while a new coach in the person of Petr Kankovsky was also brought in.

As for the players, the turnover has also been significant but that’s not unusual in the Tier ll WSHL which is populated by players ranging in age from 16 to 20. Only Hale, forward/defenseman Cole Parker and goalie Matt Soldano are holdovers from last season.

The Sabers upcoming schedule does them no favors as they once again will be called upon to face Western Division heavyweight Long Beach three times this week, with two of those contests taking place on the road.

But now that San Diego has that coveted initial victory in the bank, it hopes to build off that success and move forward. As the Sabers should know, every worthwhile journey begins with a first step. And thanks to an admirable Sunday effort, the local hockey team has indeed taken that step.