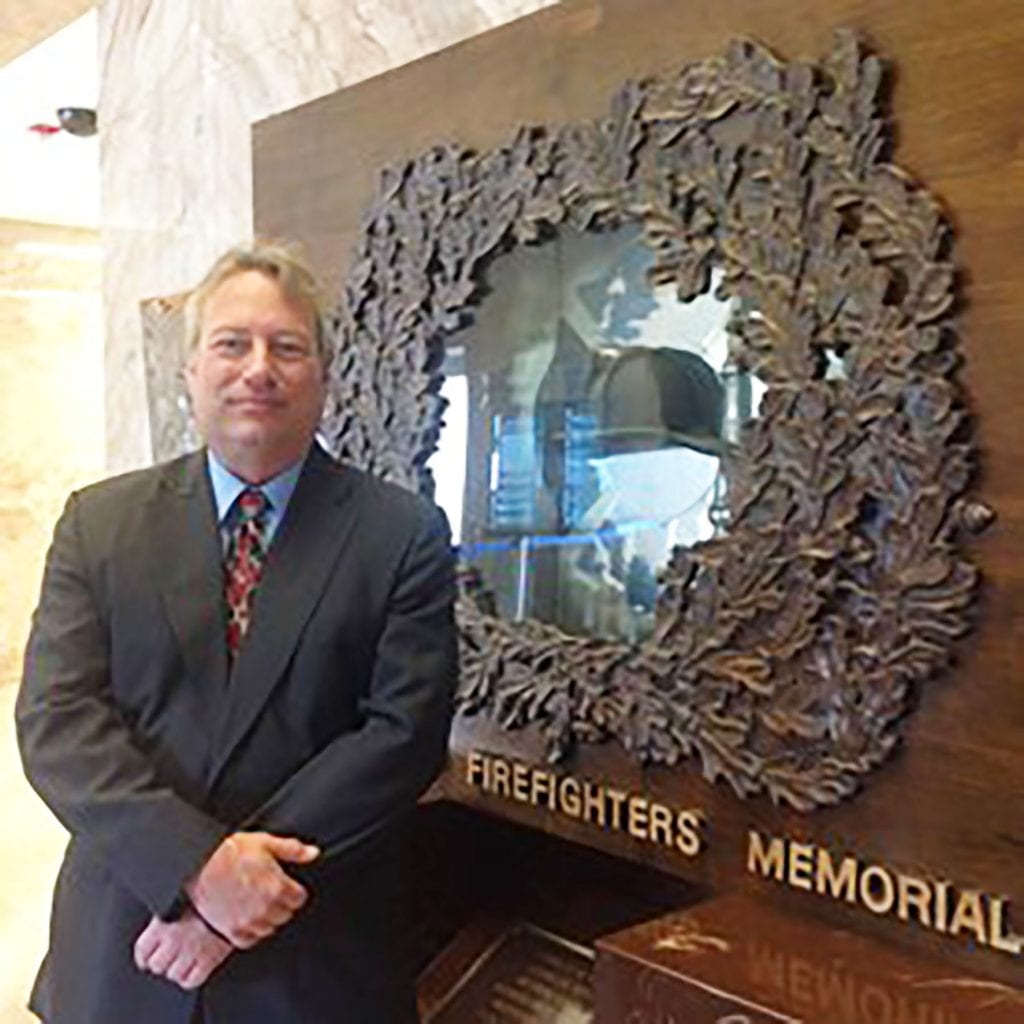 Jeff Griffith proudly refers to his more than 30 years in the fire services as he campaigns.

A County that brags about its huge budgetary reserves but finds itself on the defensive in fighting a Hepatitis A outbreak is a County that has its budgetary priorities askew says Jeff Griffith, a candidate for the 3rd District seat next June.

This is the second time Jeff Griffith has run for public office in the last two years, so one naturally has to ask: Is politics in your blood now?

Griffith would probably answer no, but . . .

Griffith was the Democrat nominee last year for state senate for the 38th District, where he was pitted against Brian Jones, the Republican—who won.  Now, he is one of three Escondido residents who have tossed their hats into the ring for the Board of Supervisors 3rd district, challenging incumbent Kirstin Gaspar for this non-partisan office.

“I never expected to run for the senate but several friends recommended that I run. This time I looked at the race at my value system and I felt the need to run. To me, running for public office is a form of public service,” says Griffith.

He is a two-term elected member of the Palomar Health Board (he was the top vote getter in the 2012 and 2016 elections) with 30 years of experience as a firefighter and paramedic currently serving as a fire captain for Cal Fire in Riverside County.

Griffith began his career in Northern California as a seasonal firefighter in Shasta County where his father spent his career in the fire service.

He is chairman of the Palomar Health Governance Committee, a post he has had since 2016 and has been the Board of Supervisors representative to the San Diego County Health Services Advisory Board since 2012.

While conceding that fiscal responsibility is important, Griffith argues that the old board of supervisors may have taken things too far: “The fact that the old Board of Supervisors have been expert in being financially responsible and they build up a reserve, they have shortchanged the public by underfunding some medical facilities.” Griffith says the County wouldn’t have had the outbreaks of Hepatitis A if there had been more public health staffers to deal with the problem. “Hepatitis A has spread to the outer community, and is not only affecting our homeless population.” He adds, “I think there should be twice as many public health nurses. County government is unable to react and if they do it’s a little too late.”

He says “I have a great opportunity to win this seat with my experience as a twice elected member of the Palomar Health Board of Directors, largest healthcare district in California and my thirty years of experience as a firefighter and paramedic currently serving as a Fire Captain.”

Besides the incumbent herself, Griffith’s most well-known opponent is Escondido city councilmember Olga Diaz.

Although acknowledging that her three terms on the city council is good experience, he feels that serving on the hospital board is a bigger job, with a much larger budget and many more employees to be responsible for.

The hospital district, he says, employs 4,000 compared to about 1,000 for the city. It has a budget four times as big. He serves on committees that deal with finance, HR, quality [of service] strategic planning, facilities and governance. Palomar Health ED saw 140,000 patients and is the busiest Emergency Department in the county.

Griffith added, “I brought transparency and accountability to Palomar Health after winning my first campaign in 2012. During my first term, I was elected as Vice Chair and I’m currently the Chair of the Governance Committee where bylaws and policies are addressed. I was the only incumbent to be re-elected in 2016.”

“I look at other districts to see what their best practices are. We increased cash on hand and added forty-five direct care positions to the next budget,” he said. “This will help with waiting time and quality of care.”

In 2014 funding for the Forensic Health Department was in danger of being cut by the CEO of Palomar Health. Forensic Health Services is concerned with helping those who have been the victims of violent crimes. It works with the Sexual Assault Response Team (SART) and the Child Abuse Program (CAP).

Griffith was then Third-District Supervisor Dave Roberts appointed representative to the County “Health Services Advisory Board,” and he reached out to Roberts for assistance. Eventually the Forensic Health Department received some funding from Roberts’s community enhancement fund.

“That was my introduction to what county government can do for good or ill,” said Griffith, “and what you as a board member can do if you are on the Board of Supervisors.”

He adds, “I think I can do some good if I am elected to the board. It’s an experience of public service.”

As a lifelong firefighter, Griffith has a rare vantage point. “I see the public ills” he says.

Although he has many priorities if elected to the board,  several are more important to him than others:

He also argues that the Sheriff’s Department is underfunded, underpaid and understaffed. “It costs $800,000 to train a deputy,” he said. “We are spending that much to train them and they will leave for other counties that pay better. We are losing these employees at all levels.  They recently gave the employees a three percent pay raise while giving themselves an 11 percent raise by linking it to the County Judges’ salaries. That is criminal.”

Griffith has been critical of Gaspar over the issue of the mental health patient crisis at Tri-City Medical Center, which suspended its inpatient behavioral health unit last year, causing officials to worry that Tri-City’s mental health patients will spill over into other hospitals, such as Palomar Medical Center, which is poised to not have inpatient psychiatric beds after next year. “I criticize her inaction on this issue,” he said. He supports Supervisor Fletcher’s approach to Tri-City, which is to demand that Tri-City come up with a plan to reinstate the beds.

“I believe in what Fletcher did,” said Griffith. “He needs help on the board. He’s by himself right now.”

Griffith added, “Palomar Health is establishing a behavioral health triage team that will work out of our Emergency Department.and is doubling is size of our Crisis Stabilization Unit from 6 to 12 beds.”

On his campaign website Griffith writes: “Every social problem I see in the field relates to behavioral health, from overdoses, homelessness, and even PTSD for our public safety workers. I want to utilize my experiences in public safety and healthcare to help protect and heal California for generations to come.”

To find out more about Jeff Griffith’s candidacy for Board of Supervisor, visit www.electjeffgriffith.com

The Times-Advocate is committed to interviewing all candidates for local office who wish to be interviewed. Contact the editor at editor@times-advocate.com.