Gridders Patterson and Sinohui made 2018 a year to remember 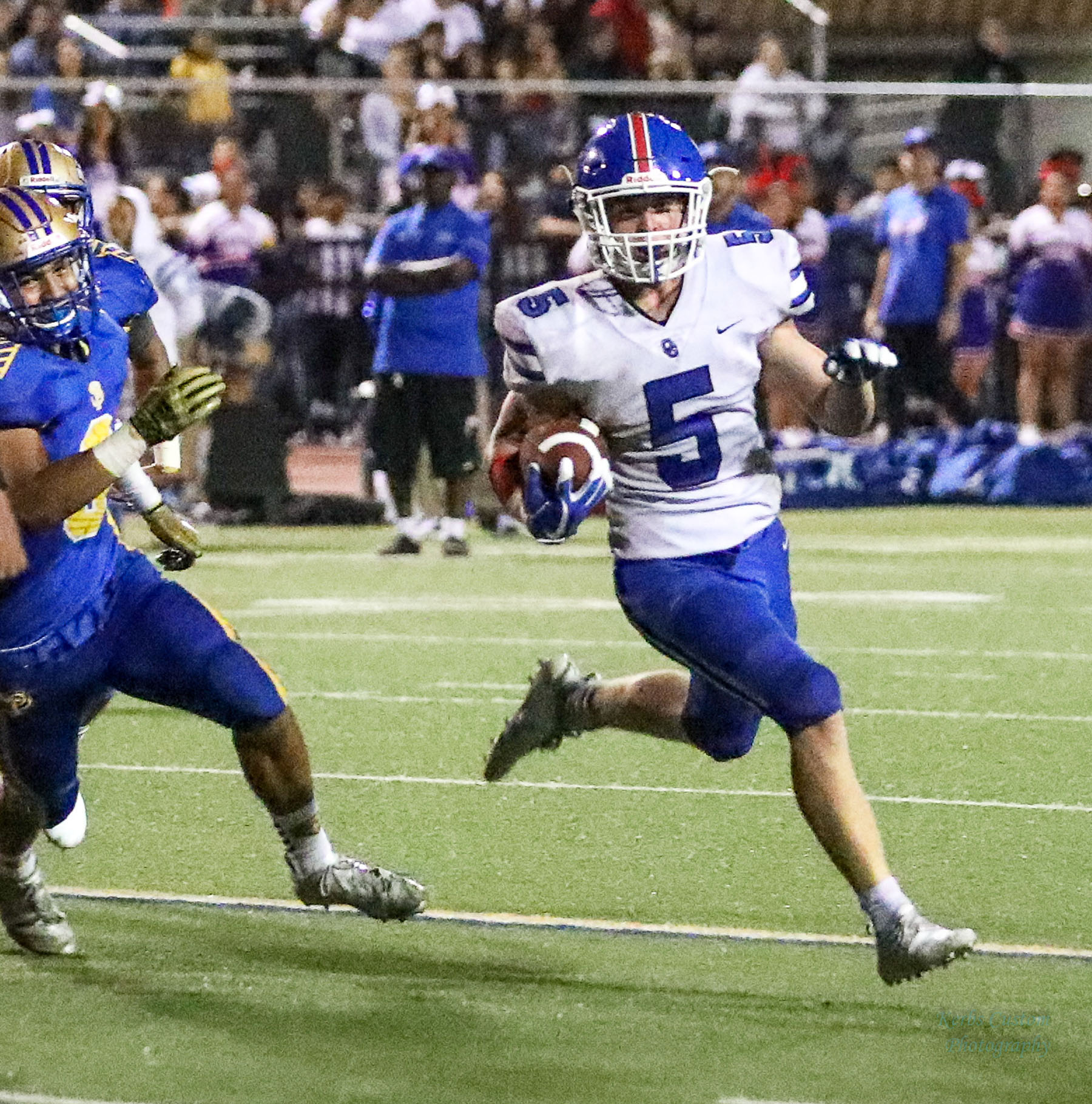 Among his many assets, OG’s prolific Cael Patterson can break containment and get to the outside. Photo by Lenny Kerbs

For the football fans of Orange Glen and Valley Center high schools, what made the season of 2018 particularly special was having the chance to watch the spectacular play of two young men who were the undisputed offensive engines of their respective teams.

Not only did they put up humongous numbers, amaze in the manner in what they constantly delivered and epitomize the meaning of “workhorse” running back, but they also went about their business with a belief and determination that was unshakeable. Like a set of towering waves, they kept crashing down on the opposition until their foes were eventually swamped over.

Moreover, a compelling case can be made that from a production standpoint and in other tangible ways, OG’s Cael Patterson and VC’s Mateo Sinohui were arguably among the top three ballcarriers in all of San Diego County.

The fact that they operated from schools located a mere twelve miles apart only added to their intrigue. You’d be hard-pressed to find another period in time when a pair of runners from the Escondido and Valley Center environs dominated on the gridiron to such a glorious extent.

And despite the fact that their styles and the visuals they presented were clearly different, the similarities between these two pigskin-toting titans were striking.

To begin with, each tipped the scales at 180 pounds although at 5-10, Patterson conveyed a more angular look than did the compact Sinohui. Both possessed enviable acceleration that allowed them to quickly get to the perimeter and steadily distance themselves from pursing defenders. But while Cael’s quicks were more on the flashy side, Mateo’s tended to be rather deceptive in nature.

Versatility was another common thread that they shared; with each being able to bang away while picking up those tough inside yards, nimbly maneuver their way through traffic or bounce things to the edge. Whether asked to help spring a sweep or make hay on a rush between the tackles, Patterson and Sinohui were rarely at a loss. They were superbly equipped to handle all types of carries under virtually any set of circumstances.

Another critical component of their tremendous success was a stamina that was almost marathonesque. Regardless of how often they were required to tote the rock, never did they seem to fatigue, tire or wear down. Their staying power was beyond remarkable. Moreover, it appeared the heavier the workload, the more dynamic they became. In fact, Patterson’s massive count of 375 carries easily paced the San Diego Section in that category while Sinohui’s 312 rushes placed him as an impressive runner-up.

Though both Cael and Mateo are exceedingly appreciative and fully cognizant of the invaluable role that their offensive lines played in their monster seasons, it’s hard to argue that the two star running backs weren’t the instrumental driving force behind the heights that the Patriots and Jaguars reached.

In a year that saw the 10-4 Pats win a SD Section Division V title and then make it to the 6-A CIF State Championship game, Patterson was the essence of a go-to guy while posting some rather stunning numbers. Not only did he rush for a whopping 2,453 yards that was second best in the entire County but he was also the section’s runner-up with 32 touchdowns (all but three coming on the ground) and third in scoring with 196 points.

And in testament to his incredible ball-security skills, Cael handled all those touches and yet never once coughed up the ball on a fumble. His combination of production while remaining turnover free was unsurpassed.

Meanwhile, just a tad to the north, Sinohui was authoring his own tour de force effort during a 8-4 season that saw his Jags win the Valley (League) title and advance to the Division II semifinals.

In addition to amassing a robust total of 1,865 yards while gaining over 100 yards in 11 in 12 of the games in which he participated, Sinohui’s 31 rushing TDs ranked him second in all of the S.D. Section. Plus, when that total is coupled with the number of successful conversions he executed, Mateo earned the singular distinction of being the County’s top scorer with a hefty 222 points.

And so as Sinohui moves on and vacates “The Hill” due to his graduation, his legacy will forever be one of uber reliability, gritty effort and a clutch gene that rarely if ever failed him.

Indeed, it figures to be quite a while until another pair of local runners cut as wide a swath of excellence as did Patterson and Sinohui. It truly did make for quite the sight as they danced, dodged, sped, twisted, muscled and powered their way into the record book not to mention the manner in which they captivated the hearts of countless OG and VC football fans.

Thankfully for local grid aficionados, Patterson will be back in 2019 to once again show his stuff but Sinohui won’t be and that’s a downer because those two in combination brought an excitement and sense of anticipation that will be nearly impossible to duplicate.