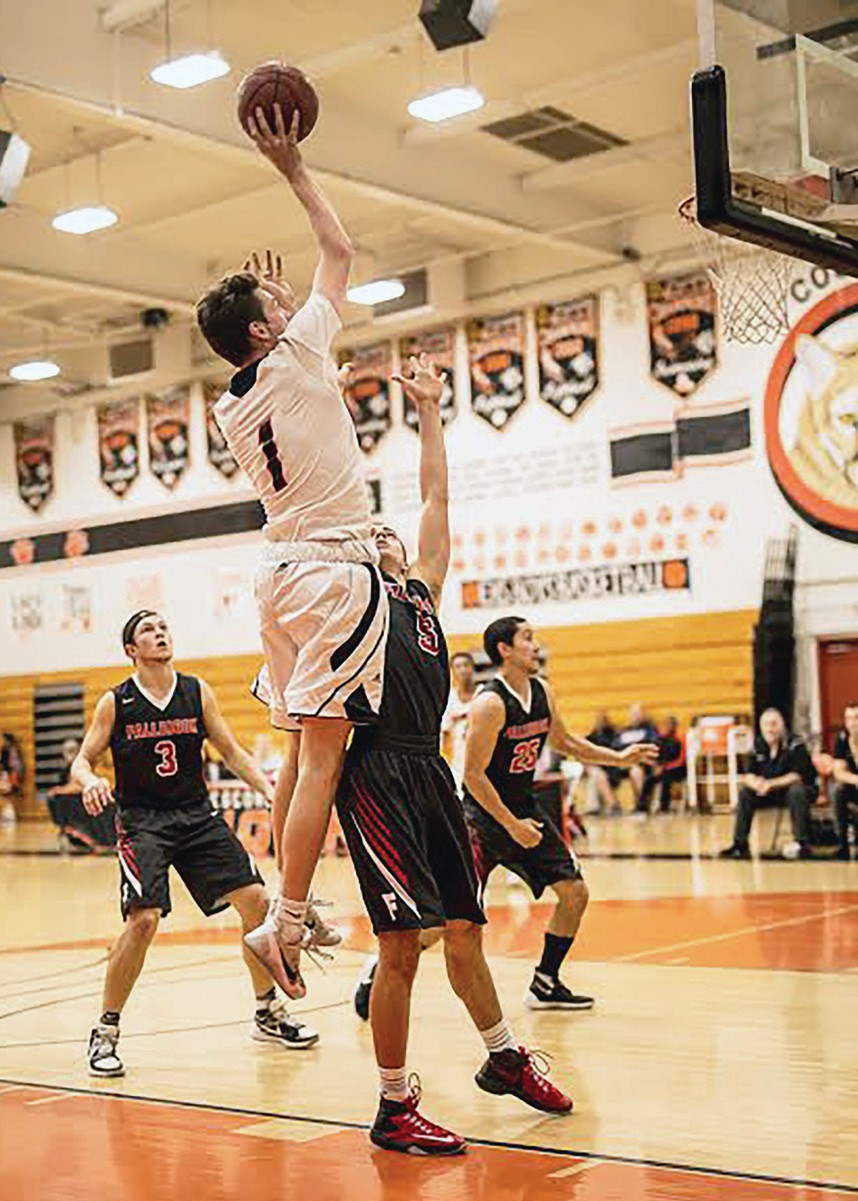 On the stat sheet, the numbers of Escondido High swingman Ryan Green were solid but they weren’t exactly overwhelming.

But when it came to impact and making the big play, you’d have been hard pressed to have found a more valuable Cougar than the 6-foot-1 junior. The word clutch and Green went hand-in-hand last Friday night when Esco sent a raucous home crowd celebrating into the streets with a riveting 63-62 win over gritty Fallbrook.

This contest was of huge importance because of the ramifications that were associated with it. It virtually amounted to a must-win game for both squads and as such, the intensity level and the physical nature of the fray were apparent for all to see.

And by virtue of this crucial triumph, the Cougs not only improved their overall record to 7-14 but more importantly, they ran their Valley League mark to a noteworthy 4-1 and forged a tie with Ramona for the top spot in that circuit. Meanwhile, the Warriors (8-16, 2-3) saw their hopes for contending in league and making the postseason all but evaporate. Knowing that only a victory would keep it afloat, Fallbrook exhibited a spirited effort but by falling just short, it is now clearly on the outside looking in.

One of the prime reasons that the Warriors left the court heartbroken and dejected was because of the late damage that Green inflicted upon them. First, Green got loose in the right corner and buried a game-changing 3-pointer that vaulted the Cougs from a deficit and into a pivotal 60-58 advantage. Tellingly, the crew of Coach Paul Baldwin would never again be in arrears.

But without question, Green’s most heroic deed came right near the nub and on this occasion, it took place on the defensive end. With a mere 4.3 seconds left on the clock and in possession of the ball, the Warriors called a timeout to set up for a last-ditch shot. The ball was inbounded to hustling guard Jacob Oatman, who looked to either drive or kick the ball to an open teammate. But thanks to an active Green, those options were denied him. Moving quickly to his left, the Cougar defender shut off his foe’s path and with time fleeting and with no other alternative, Oatman was forced to unload a desperation shot that came nowhere close, failing to even draw iron. Because of the smothering defense of Green who stuck to Oatman like gum on a shoe, Fallbrook’s chances for a dramatic victory turned out to be nothing more 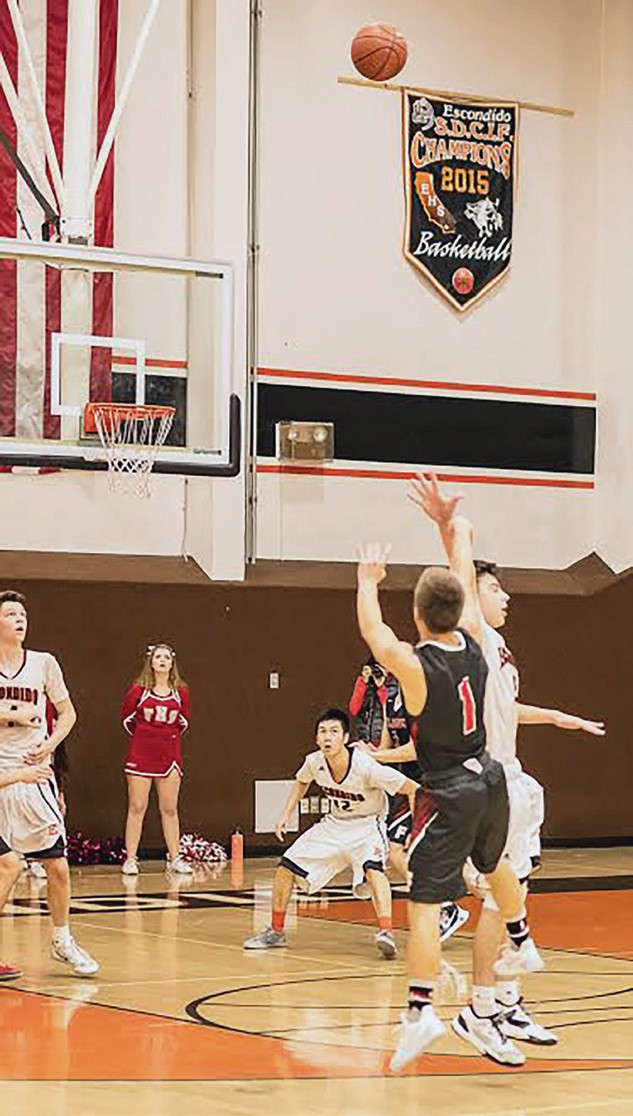 than a pipe dream.

However, for much of the night and prior to Green’s taking center stage, Esco seemed to be fighting an uphill battle.

From the opening tap, Fallbrook was ultra aggressive, exerting acute full and half-court pressure that clearly troubled the Cougs.

Not once in the entire first half did it ever own the lead but Esco hung tough thanks to a Wes Jones trey from downtown and a pair of Green free throws late in the second period that helped the home team stay within striking distance (33-30) at intermission.

That margin would have been considerably more one-sided if not for the offensive one-two punch of Coug pivot-man Jacob Moskowitz and Jones, each of whom tallied 10 points before intermission. The battling Moskowitz was particularly effective in the first stanza when he delivered three follow shots and a sweet kiss off the glass. Then, it was Jones’s time to step up and the talented junior did so by going on a second-period scoring spree that saw him drop in a chippie from underneath, drain three free throws and pop home the aforementioned trifecta.

For the visitors, it was the assertive Kobe Stallings who keyed the Warriors’ attack. Scoring on an array of shots that included a follow-up, a layup, a corner trey, a flip from in low and four conversions from the charity stripe, Stallings had been next to impossible for the Cougs to contain en route to 13 points.

It wasn’t until less than two minutes were left in the third that Esco achieved its first tie of the game at 40 when Tommy Tran, who came off the bench to admirably handle the point guard duties for most of the final 16 minutes, knocked down a huge bomb from the left corner. Moments later, it was Moskowitz who went strong to the hole and voila, the Cougs finally had their first lead. The period eventually ended at 44 all which laid the groundwork for one barnburner of a finish.

For most of the final stanza, it was a see-saw affair with 13 lead changes or ties occurring before Green’s downtown dagger. And then when Tran, who employs a distinctive high arc shot from the line, netted two free throws, Esco stretched ahead to 61-58.

But Stallings refused to be denied and when he powered his way to the hoop, the spread was back to only one. Next it was Moskowitz who came up large with a sublime shot as he banked one in while drifting to his left. And yet, this 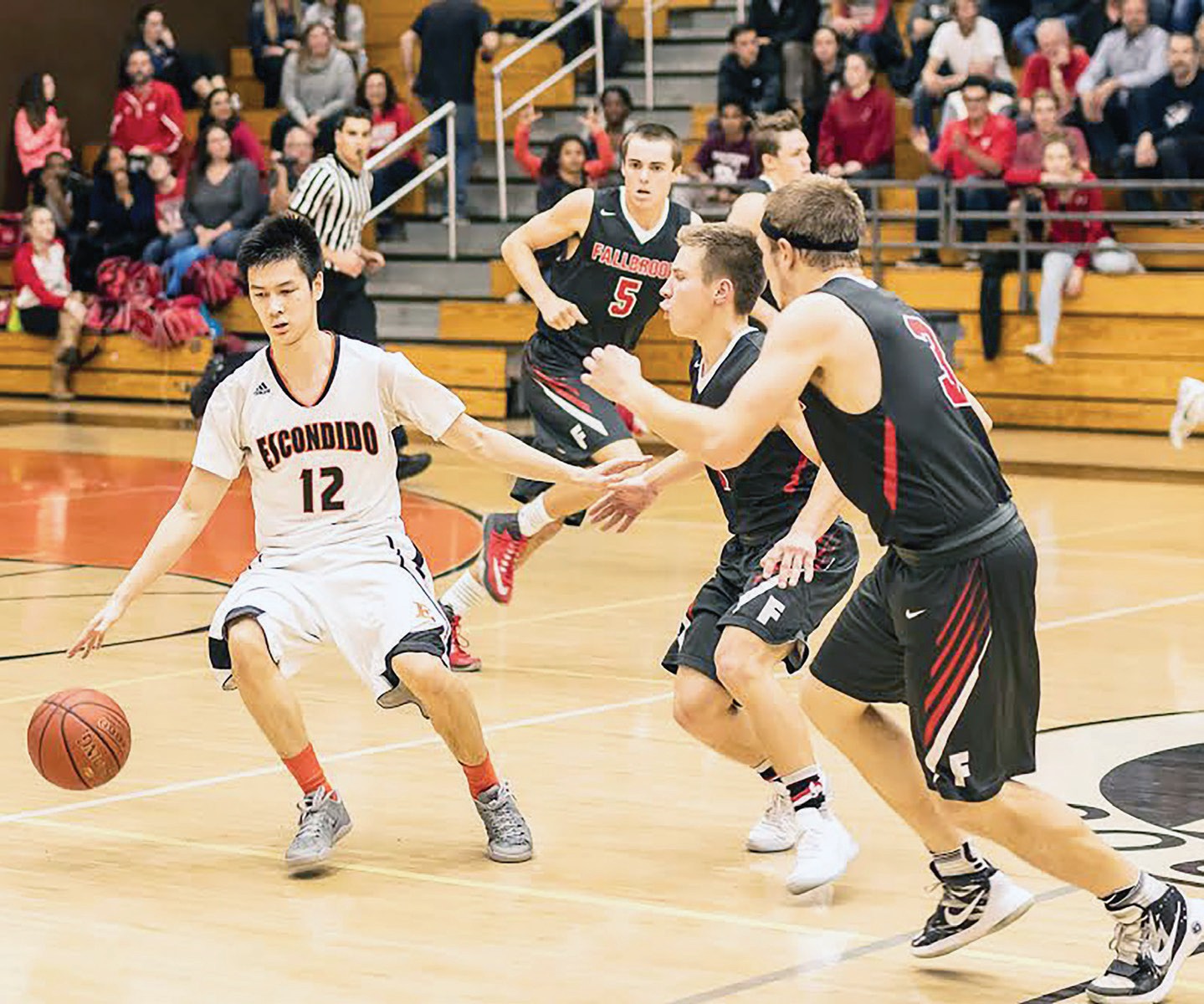 Tommy Tran came off the bench to orchestrate the Cougar offense in the second half. Photos by Lenny Kerbs

only seemed to energize a now thoroughly revved up Stallings who again slashed to the bucket and muscled in a hoop from in tight. That made the count 63-62 and just 29 seconds later, Green was destined to make his epic stand.

As befitting a genuine team effort, this Esco win had contributors galore. As usual, Moskowitz was a potent force underneath, displaying a deft touch while scoring a team-high 23 points and gathering in plenty of rebounds. Always getting after it and exhibiting great heart, this senior center is arguably the VL’s best and most dependable big man.

Jones, a reliable point producer who finished with 13, demonstrated that his repertoire isn’t limited to just an outside assault. Green’s timely efforts, which included putting eight points on the board, were of immense importance. Guard Haikeem Barber looked confident and also made a mark, tallying five of his eight points in the decisive final period when he nailed a shot from downtown before scoring again on a honey of a drive.

Under challenging circumstances, Tran rose to the occasion by efficiently running the offense. Showing a good handle, each and every one of his six points was huge.

And finally there was Chris Landry, who though he scored but one point, exerted an influence that was undeniable. Passionately scrapping for rebounds and getting his hands on more than a few loose balls, Landry made a real difference in the ultimate outcome.

For the vanquished Warriors, the player that almost singlehandedly kept them alive was Stallings, who parlayed his indomitable will into game-high 25 points. His determination to attack the rim without fear or hesitation was a highlight of this truly compelling game.

Having won four of its last five and shaken off the effects of a disappointing loss to Valley Center eight days ago, Esco is once again ideally positioned in the VL. Next up is arguably the most important and challenging contest of the season when the Cougs travel to Ramona this Tuesday night with first place and the league title definitely at stake. Having already defeated the Bulldogs 68-59 just last month, Escondido is fully capable is of turning the trick once again if it can get contributions from across the board as it did versus Fallbrook.

And as they did last Friday evening, hopefully the Cougs will continue to benefit from getting a Green light!

Writer’s Note – All photos contained in this story in addition to other game shots, pictures of the EH cheerleaders and of the postgame celebration are available at www.kerbscustom.com