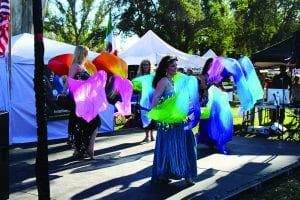 The Escondido History Center is gearing up for its big event of the year, the Grape Day Discovery Festival on October 7, 2–8 p.m. at the center, located at Grape Day Park. If entertainment, rather than shopping is your game, this is the event for you.

This year’s theme is “Party like it’s 1908”—that’s the year of the very first Grape Day.

“This is the oldest celebration in and of Escondido. We hope that our community will come out to support the Escondido History Center and enjoy this fun, family event!” said Tracey Ellison, director of the History Center.

She added, “We have a lot of stuff for kids to do. It’s a fundraiser for us, so yes, please, come and support us!”

Excerpted from a paper by Nancy Hylbert

Indeed, it was a memorable trip on September 9, 1908 for 1,100 passengers aboard the train from San Diego to Escondido via Oceanside. The distance was approximately 60 miles. The trip’s duration: eight hours. The story goes that the train could not quite negotiate Richland Hill between Vista and San Marcos and had to be cut in two and brought in one train at a time.

The event was planned in less than a month and was the brainchild of local merchant and Mayor Sigmund Steiner and bank owner W.L. Raimey who called a meeting with the idea of promoting the grape industry of Escondido Valley. Steiner had read a horticulture report which stated: “Escondido Muscat’s test sweetest in the State of California.” City and back country newspapers jumped on the publicity bandwagon. Who would have imagined that this would become an annual affair, second only in popularity to the Tournament of Roses Parade in Pasadena?

On September 7, 1920, J.H. Heath, secretary of the Chamber of Commerce and an early correspondent for the San Diego Union recalled the first Grape Day in a news article.

Heath described the unpaved Grand Avenue during the first Grape Day Festival as “resplendent in holiday attire” and he went on to tell how the “guests” were let loose in the vineyards to “help themselves.” What ensued was a confetti battle as grapes were hurled at one another in great fun. Needless to say, the vineyard owners were irate. From that time on, the grapes were brought from the vineyards to be displayed on tables and booths at Grape Day Park.

A parachute attempt was aborted when the parachute would not separate from the balloon to which it was attached. Fortunately, the balloon had not risen very high and eventually settled gently on the top of a house.

Dinners were served for 35 cents. Round-trip fare from San Diego to Oceanside on the main line of the railroad and to Escondido on the branch line was $1.50. Before the decorations of the first Grape Day Festival were cleared away, plans were formulated to make the next year’s event even grander. This was to be an annual event which would put Escondido on the map.

The success of the first Grape Day in 1908 necessitated two trains from San Diego and one from Los Angeles the following year. Returnees brought others; more events were planned. Thousands came to visit the valley and sample the grapes. Farmers were invited to bring exhibits of their best fruits and vegetables. Festivities from then on included entertainment, dancing, tours, speeches, games, contests, stunts, and a parade up Grand Street School, which in 1910 became Grape Day Park. The annual event was declared a success and in future years would be attended by up to 40,000 spectators. In 1912, an endurance motorcycle race was introduced, with speed limited to 20 miles per hour. There was also a 100-yard professional running race. Fried chicken sold for 20 cents, pie for 5 cents, and hard-boiled eggs three for a dime.

Beginning in 1913, it became the custom to elect a queen of the festival. The lucky winner was featured in the parade’s leading float and at the day-long festivities. Queen votes were sold and the proceeds used to finance the celebration. The first queen of Grape Day was attended by maids of honor, pages, flower and fruit bearers and a crown bearer.

Though somewhat modified in splendor with the passage of time, the honor proved quite lucrative in the early years. The queen of 1921 was presented with a $150 Victrola. The following year’s ruler received a fully equipped Ford coupe! In 1925 thousands of onlookers witnessed a spectacle never before seen: the landing of an airship bearing good wishes from the President of the Panama-California International Exposition. Acknowledgment was returned by carrier pigeon.

The Chamber of Commerce reported in the mid 1920’s that “an elaborate program of entertainment was provided, commencing with a parade of floats in the morning and ending with a street dance in the evening.” By now scores of automobiles lined Grand Avenue as thousands of people sat on top of, or in the comfort of, their cars to watch the parade. It was estimated that 25,000 to 30,000 spectators were in attendance. Most of the festivities took place in Grape Day Park and included exhibits of all varieties. Approximately 10 tons of fine Muscat grapes were distributed free of charge to the throngs of visitors. At the height of grape season, the vineyard’s choicest grapes were selected for the celebration.

The festival had taken on the proportions of a country fair with exhibits of livestock, poultry, and agricultural products in abundance. Grape Day reached its heyday in the late twenties and early thirties. Interest in the festival waned in the late 1930s as the cultivation of grapes gave way to citrus and avocados. Also, the hot weather and Santa Ana winds typical in early September caused visitors to object to the event being staged on September 9. Upon the onset of the Second World War the celebration was cancelled. After a lapse of several years the old community spirit was revived and the festival was held again, but grandiose plans didn’t return it to former glory. Grapes for distribution now had to be imported from the Imperial Valley as the local grapes were not yet ripe.

The hometown celebration has had its ups and downs, endings and revivals. Some felt that it should be given up as grapes were no longer a primary crop as they were in 1908. The original vision of the city founders had been realized and as years passed the festival evolved into more than simply a celebration of the past; it was a venue for the community to showcase its accomplishments and contribute to the city’s future development. Escondido was on the map.

Entertainment (on the main stage):

• Raffle with prizes like: dinner with the Escondido Fire Chief for Six, $230 basket from The Sculpture Salon, Disney Basket worth over $600, Photography gifts, tickets to events and galleries, and so much more!