Grape Day Discovery Festival will have something for everyone 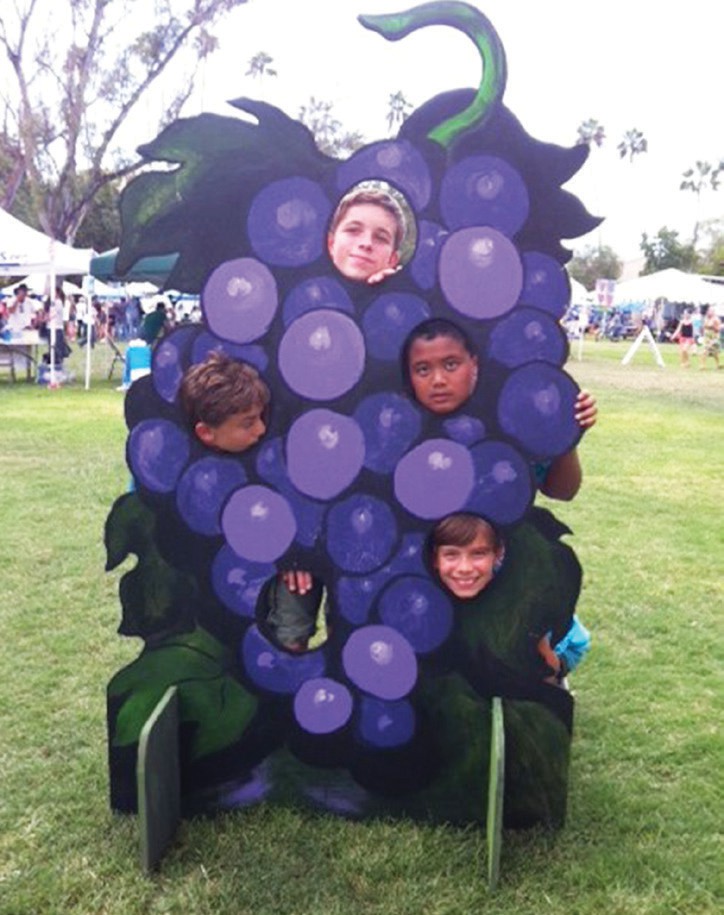 Alexander the Grape, one of the familiar sites at the Grape Day Discovery Festival.

The annual Grape Day Discovery Festival on October 1, 2-8 p.m. at Grape Day Park will continue a longstanding Escondido tradition— with a few twists and changes.

For one thing, the festival, which is free, and dates back more than 100 years to the days when a large part of Escondido’s economy was based on grape cultivation, will be happening for the first time in October, instead of September. It will also be in the late afternoon, instead of morning and noon, to ameliorate the effects of the sun, which can be very strong this time of year.

Because it will happen in the late afternoon, the festival this year will not include a parade, which Stacey Ellison, director of the Escondido History Center, expects will disappoint a lot of traditionalists.

“We are sorry about it,” she told The Times- Advocate. “People have been very disappointed. A lot of people are very attached to the parade. We moved it from the afternoon because of the heat. When you move the time of the parade it’s then hard to get the city to close down the streets.”

She is hopeful that a festival without a parade will be a one-time thing. “We are open to having it next time. We just need to figure out how,” she said.

But if you focus on what the festival WILL offer, you will find that you are never bored or without something to see or do.

Get Your Grape Pies here!

Yes, if you’ve ever wanted to dig your molars into a slice of intensely flavorful grape pie, your time has come.

The dedicated bakers and chefs of the Escondido Historical Center are legendary for their feats of bakesmanship. But towering above them all is Maria Tuck, who each year bakes grape pies that are very, very popular. We are going to try to sit at her feet and learn some of her secrets (if we can get a hold of her before the festival). But we might have to just settle for a slice of pie! The bake sale is a fundraising for the history center.

Also part of the sale is the collectibles booth, which has antiques and ephemera of a quality that you won’t find at your average garages sale. “W have it once a year,” says Ellison. “If you have an eye for treasure you will definitely find some things you will like.”

Activities will abound for all ages. Dr. Bronner’s Magic Soap Co. will offer Magic Foam. “You climb in the back and they foam you up and then hose you down,” said Ellison.

The Beer & Wine Garden will be hosted by Escondido Sunrise Rotary Club and Stone Brewing, which will provide the brews. There will also be a wine concession, with the winery to be announced.

The City of Escondido recreation department will host children’s games. They will include such favorites as sock races, a dodge ball contest and other fun kids games.

Lots of vendors are expected to provide arts and craft opportunities by local “makers” and non-profit groups. Applications for vendors will be taken until September 16.

If you enjoy the feeling of sticky, gooey fruit between your toes (and who doesn’t?) then the annual Grape Stomp is for you. You know what it involves. You climb into a wooden vat provided by the Bernardo Winery, and you start dancing around. In case you’re wondering, although grape stomping was once used to create actual wine, nobody does it anymore. They just reenact it.

Think you should be trying out for “Dancing With the Stars?” Then this dance competition is probably not for you. According to Ellison this competition is more of “bring your own music” and “get up and shake it” kind of entertainment. Go ahead! Embarrass yourself! “It’s just good fun!” says Ellison. Sign up on the day of the event. The crowd will vote for the Peoples’ Choice from among the contestants.

Test out your ability to eat a pie with your hands tied behind your back in the traditional pie-eating contest. No special skills needed, although having a supply of bleach in reserve might not be a bad idea.

For $2 per ticket you can be entered in prizes for Disneyland tickets, In N Out Burger, gift cards, sporting event tickets and tickets to Balboa Park attractions. You get to buy tickets and then place them in the themed basket that you prefer — so that you get the prize that you want if you win.

This is a fun game where participants are shown artifacts from the museum and Escondido’s past and try to figure out what they were used for.

As usual on Saturdays, the history center’s blacksmiths will be plying their trade in the big barn area, giving demonstrations.

There will also be a wool spinner, demonstrating how to turn tufts of white stuff from the sheep into yarn for clothing.

There will be all kinds live entertainment all during the day. The Little Big Band is made up of local guys and gals who practice once a week. Banjo artist Dan McNay will also play, as will mariachis, folkloric and flamenco groups.

“It’s a lot of work to put it on,” says Ellison, noting that the festival would not happen without the dozens of loyal volunteers from the history center and the teens from the local high schools.

One of the sponsors of the event is Escondido Shines, which is a subsidiary of the Escondido Rotary Club. Vaughn North, who is the honcho for this group, will assemble his group of volunteers after the event to roam around and clean up the park.