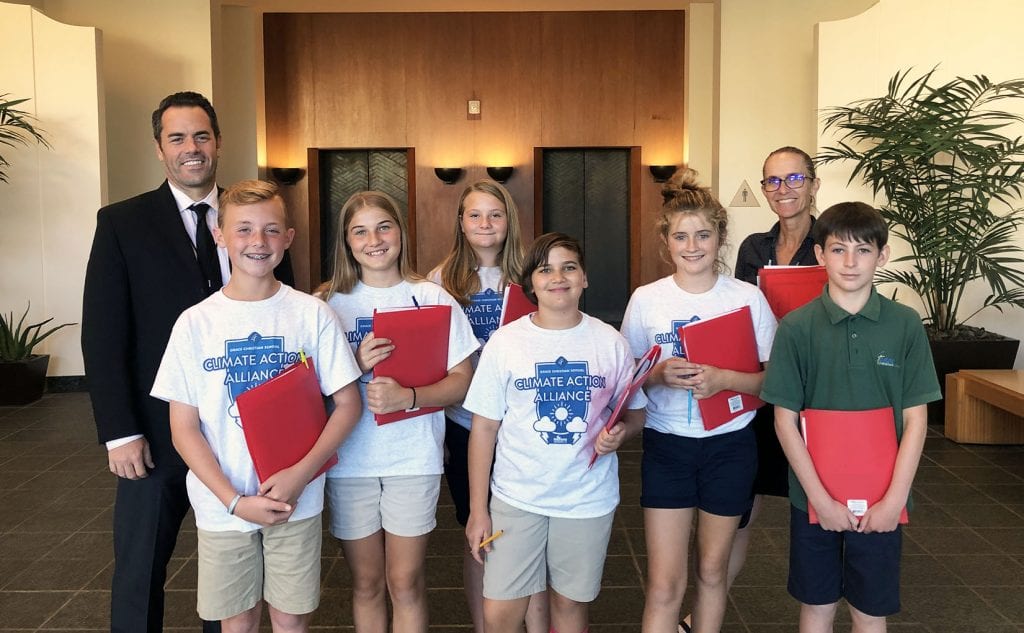 The Climate Action team from Grace Christian School in Escondido, with their adviser Karisa May and Escondido’s Assistant Planning Director, Mike Strong, who they met with last fall as part of their project. The students are Logan Boyer, Kallie Brumfield, Emilia Snyder, Pearl Isbell, Joseph McTigue, Tara Maalouf.

This is the first leg of the Lexus/Scholastic National Eco Challenge.  The team will split a $10,000 prize, and they have earned the opportunity to compete in a new challenge against the other fifteen winners from across the country.

This team was determined to help reduce carbon emissions generated by the large number of cars idling in the school parking lot during drop-off and pickup hours. Toxic fumes were accumulating underneath solar panels in the loading zone.

The team decided to say, “Get lost, exhaust!” The students developed a “Fresh Air Friday” action plan to confront the air-quality issue for this academic year and for future generations by: getting permission from the City Clerk’s office to create a limited-time parking loading zone on a street near campus; getting participation pledges from parents; designing the “No Idling” zone and its signage; and recording changed parking behavior and lowered carbon emissions.

They raised awareness by directly emailing parents and school staff to inform them about their initiatives, advertising with banners and flyers hung around campus, posting on a school website, and showing an educational video at a school assembly.

In addition, CAA raised awareness in the greater community by delivering a presentation to the Escondido City Council, posting on influential social media platforms, and by having the story of their efforts published in the local newspaper and on the council’s website.

The results: In just one day, decreasing the number of cars idling during pickup and drop-off on Fresh Air Friday prevented 12.2 pounds of carbon from entering the atmosphere. Each driver saved money by not running their engines while waiting on campus; and the number of families who walked from a parking area to school boosted their physical activity and improved the overall health of the student population.

In addition: Grace School administrators agreed to implement Fresh Air Friday weekly beyond the November event; the Climate Action Alliance developed a working relationship with the city of Escondido; and individuals throughout the community have indicated an increase in their commitment to changing their driving habits.