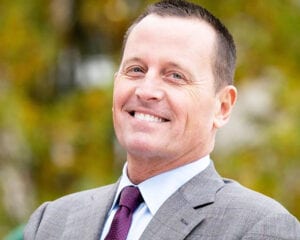 Escondido Republican Women, Federated will host Former Ambassador and Acting Director of National Intelligence Ric Grenell as keynote speaker February 17 at 12:30 p.m. on Zoom.  He will talk about multiple subjects and his experiences in the Trump Administration.

The GOP women will also hear about  a new project from San Diego County Gun Owners PAC COO Wendy Hauffen called #NOTMESD that seeks to help woman to better prepare themselves to be more responsible for their own safety.

Contact ERWF President Gina Roberts at EscondidoRWF@CFRW.org to register and get the Zoom link.

Richard A. Grenell served as United States Ambassador to Germany from 2018 to 2020, Presidential Envoy for Kosovo-Serbia Negotiations, and as Acting Director of National Intelligence in 2020.

Grenell started his tenure in Berlin by successfully negotiating with German businesses to sever their ties with the Islamic Regime in Iran and getting the German government to accept the return of former Nazi prison guard Jakiw Palij. He also successfully pressured the German government to increase its defense spending, ban Hezbollah in Germany, and shut down the North Korean Youth Hostel in Berlin. Grenell also focused on stopping the Nord Stream 2 Russian gas pipeline, combating anti-Semitism, and growing German companies’ investment in the U.S.

As Acting Director of National Intelligence, Grenell streamlined the intelligence community, implemented $19 million in budget savings, and declassified documents related to the Russian investigation that had been previously unreleased.

Grenell was the longest-serving U.S. Spokesman at the U.N. serving from 2001 to 2008 and advising four U.S. ambassadors.  In 2004, he was appointed as Alternative Representative to the U.N. Security Council with full voting rights and privileges.

He has served as the primary communications adviser for public officials at the local, state, federal, and international levels.  In 2012, he briefly served as National Security and Foreign Affairs Spokesman for presidential candidate Mitt Romney, making him the first openly gay spokesman for a Republican Presidential candidate. Grenell is also the first openly gay U.S. Cabinet official.