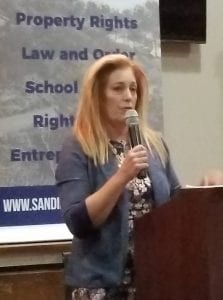 The 75th Assembly District’s GOP caucus meeting kicks off at Mike’s BBQ in Escondido earlier this week. Many local Republicans in Marie Waldron’s district showed up Monday night to talk about the upcoming election. Some who attended included Mark Meuser, San Marcos Mayor and Board of Supervisors candidate Jim Desmond, Craig Garcia and Gina Roberts. Of course, Assemblywoman Marie Waldron was there.