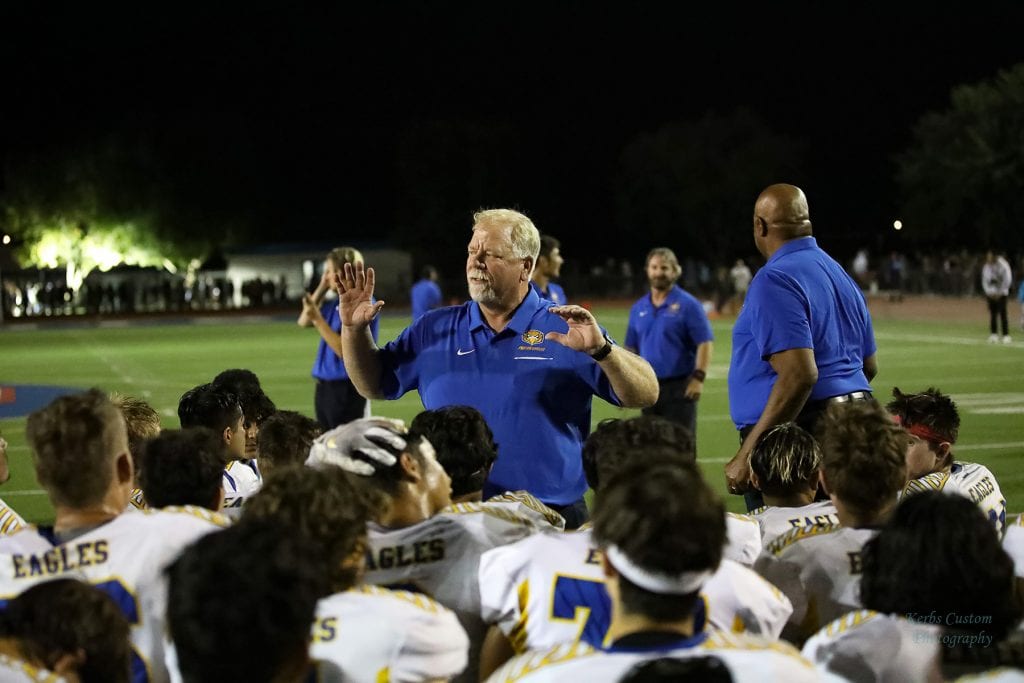 Coach Tony Corley has his Golden Eagles winning important games and playing ever so clutch. Photo by Lenny Kerbs

In another remarkable demonstration of their propensity for making big plays when they’re needed most, the San Pasqual Golden Eagles rallied twice from behind in the fourth quarter to secure a 35-32 win last Friday night over gutsy Valley Center in a game that had huge implications as it relates to the Valley League.

In a rousing final 12 minutes that saw the lead switch hands four times and a hefty 29 points scored, it was host SP that had the last word when quarterback Trevor Jungman hit a crossing Masato Thompson with a game-winning 14-yard touchdown pass with a mere 42.6 seconds left. That tally ended a flurry of scoring that had the fans from both sides riding an intense emotional rollercoaster ride.

“This ranks right up there,” said SP head coach Tony Corley when asked about memorable wins during his lengthy tenure. “Our guys were gritty and persistent which you have to be to win these type of close games. They just believe they can get it done no matter what.”

With their fourth straight win since their only loss to Torrey Pines on September 13, the G. Eagles have left no doubt that they’re one of the hottest team in all of San Diego County. Moreover, the triumph over the Jaguars upped SP’s record in the VL to a perfect 3-0 and makes them the prohibitive choice to take home that circuit’s title when all is said and done.

As for the VC (4-4), this was a setback that stung because the Jags had gallantly overcome an abundance of adversity to promisingly position themselves for what would have been a defining victory. But when matters reached critical mass, the visitors simply couldn’t produce the necessary defensive stops that would have meant the difference.

Now owning a 2-1 mark in league play, the Jags will have to win out to have any hope of sharing a VL crown. But for that to happen, the G. Eagles would have to stumble somewhere down the stretch and that possibility seems very remote.

The decisive fourth stanza couldn’t have been any more riveting with its constant back-and-forth. Trailing by four points, the Jags would jump ahead as the result of a 58-yard drive that featured Ethan Bachman’s recovery of a fumble after a completed pass, a nifty 10-yard cutback run by  back Kyler Riche and a pivotal scramble by QB Frank Stehly. The capper came when on 3rd and goal from in close, Riche (149 rushing yards) launched himself into the air with a mighty leap that broke the plane of the end zone. Soon after, Riche did the honors again when he powered into the end zone with a two-point conversion tote that put VC out in front 25-21.

But that advantage would last just over three minutes as the G. Eagles came storming right back. Thanks in great part to a superb kickoff return by James DeBora and a pair of critical personal foul penalties against VC, it wasn’t long before the home team was set up at the 14-yard line. Eventually facing a crucial 4th and 3 situation from the 7, the resourceful Jungman sold a handoff, slithered outside and then in determined fashion fought his way to pay dirt. Suddenly, it was SP that was atop the scoreboard at 28-25 with the time remaining (4:15) becoming ever more a factor.

However, VC’s versatile Riche delivered an emphatic response of his own when he hauled in the ensuing kickoff, sped across the field and hustled down the left sideline for a sensational 47-yard return. And after a pair of athletic runs by Stehly netted 23 key yards, the Jags were threatening once more. From there, the poised Stehly stepped back and zipped a 13-yard TD dart to Xavier Jones who came open after executing a deft out route. With the clock down to just 1:19 remaining and holding onto a 32-28 edge, the Jags were understandably a jacked-up group along the far sideline.

All they had to do was just keep the G. Eagles out of the end zone and the game and a probable fifth straight VL championship would have been theirs.

But alas, VC simply wasn’t able to hold off the opposition decked out in blue and gold. What can only be categorized as a heroic and resilient team effort by the visitors was about to go by the wayside.

All night long the Jags had been undermined by allowing SP to rip off huge and impactful kickoff returns and at this seminal moment, that damaging pattern continued. Once he got hold of Jeremiah Sinohui’s boot, the elusive DeBora got loose again with some nice stepping along the sideline and wasn’t stopped until he advanced the ball all the way out to SP’s 48. Now armed with great field position and given their undeniable clutch gene, the G. Eagles had a bona fide shot to pull things out. 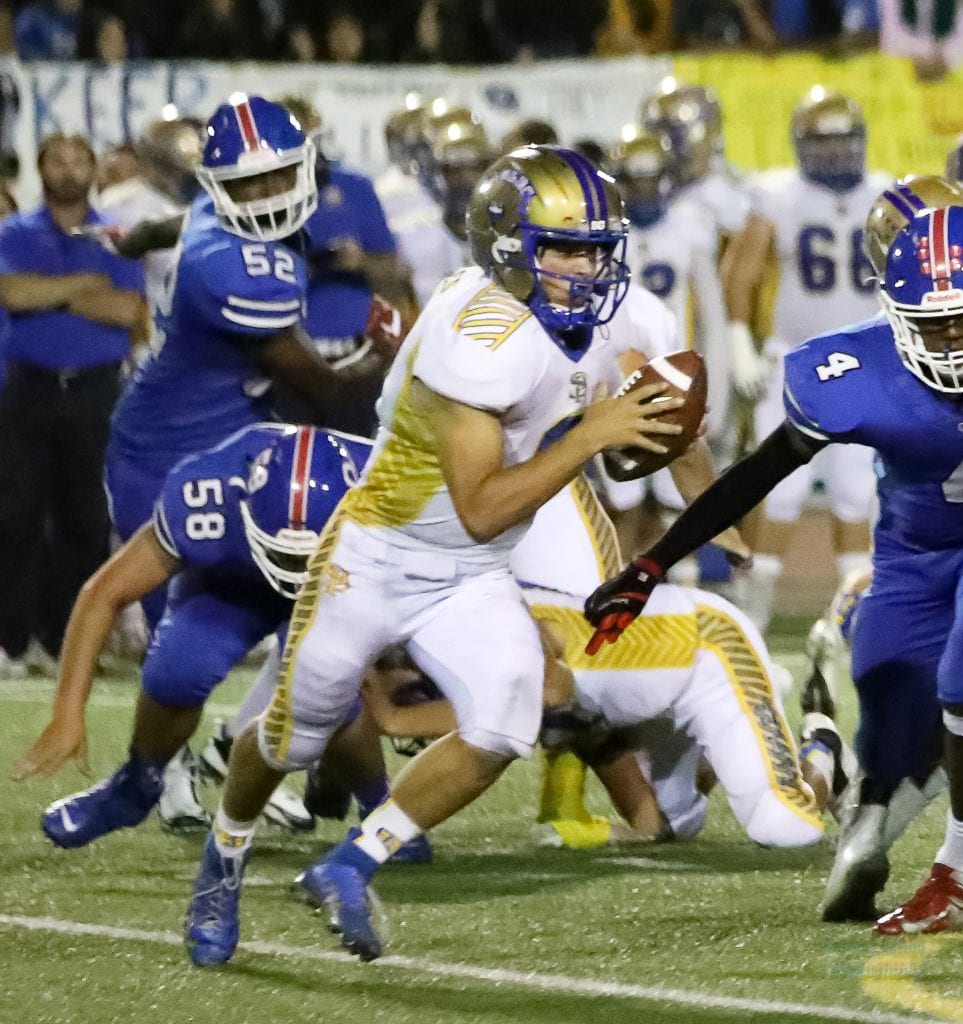 As he did here earlier in the season against Orange Glen, G. Eagle Trevor Jungman turned many of his quarterback keepers into key plays during the win over VC. Photo by Lenny Kerbs

A 21-yard connection between Jungman and a stretching Luke Wilson got the drive off to an auspicious start. But a short pickup and then two subsequent incompletions had SP on the ropes, facing a die-or-die 4th and 7. One sensed that the contest would be won or lost on what happened next. Not surprisingly, the unflappable Jungman wasn’t to be denied as he took his time before drilling an uncovered Thompson for a 14-yard gain. And on the very next play, the exact same combo dealt a crushing blow to the Jags’ hopes when they collaborated on the aforementioned game-clincher.

Yes, VC got the ball back and managed to move it inside SP territory at the 47-yard line but the seconds were now down to a precious few. With no other option than to go for broke, Stehly had to gamble and when his throw downfield led Bachman too far, it was easily picked off by the ubiquitous Thompson and that was all she wrote. A fantastic finish to a one heck of a game had finally played itself out.

A first half that was hardly uneventful had laid the foundation for the theatrics that were to follow. On VC’s initial play from scrimmage, Riche burst up the middle, spun powerfully off of a solid hit and then put his legitimate speed to good use on his way to a stunning 81-yard touchdown dash that staked the Jags to an early lead.

However, the G. Eagles didn’t appear all that phased by the quick strike as they rallied sharply and by early in the second quarter, they had seized a 14-7 margin courtesy of TD runs from fullback Mark Santar and Jungman.

A well-stroked 28-yard field goal by Sinohui got the Jags closer and when VC forced SP into a 4th and 5 situation near midfield late in the second quarter, it looked like the count would read 14-10 at the half. But Santar, who also happens to double as SP’s punter, had other ideas when instead of kicking, he caught the Jags unawares by taking off with the snap and rambling his way to a huge 15-yard gain that moved the chains and allowed SP to maintain possession. Two plays later, Jungman slung a throw that wideout Kody Ketcham snared with a nice reach-back grab that positioned the hosts at the 11. And then with just 3.1 seconds before intermission, Jungman spied Thompson breaking free and delivered a spiral that his unencumbered wideout caught in the front part of the end zone.

Tellingly, Santar’s fake had been the genesis for a dramatic shift in fortunes. Instead of being down by just four at the break, the Jags were stuck looking up at an 11-point deficit.

Nonetheless, in the third quarter, VC parlayed Ryan Hakes’s recovery of a blocked punt into a timely score that brought the Jags close again and ensured that a fight would be on for the balance of the contest.

In the game’s aftermath, Corley was happy to sing the praises of his entire team but he was particularly impressed by the efforts of Jungman and Thompson. “As he’s been all season, Trevor was our catalyst and leader tonight,” saluted Corley. And then the coach turned his attention to the multi-dimensional Thompson. “Masato was just outstanding. He did it all whether it was on offense, defense or returning kicks.”

Based on reasoned projections, this was probably the determinative game as to who will ultimately win the Valley League title. And it came down to one irrefutable fact. When the pressure was at its most intense, SP simply refused to blink or flinch. As they have throughout this splendid campaign, the Golden Eagles played to their MO of continually rising to the occasion.