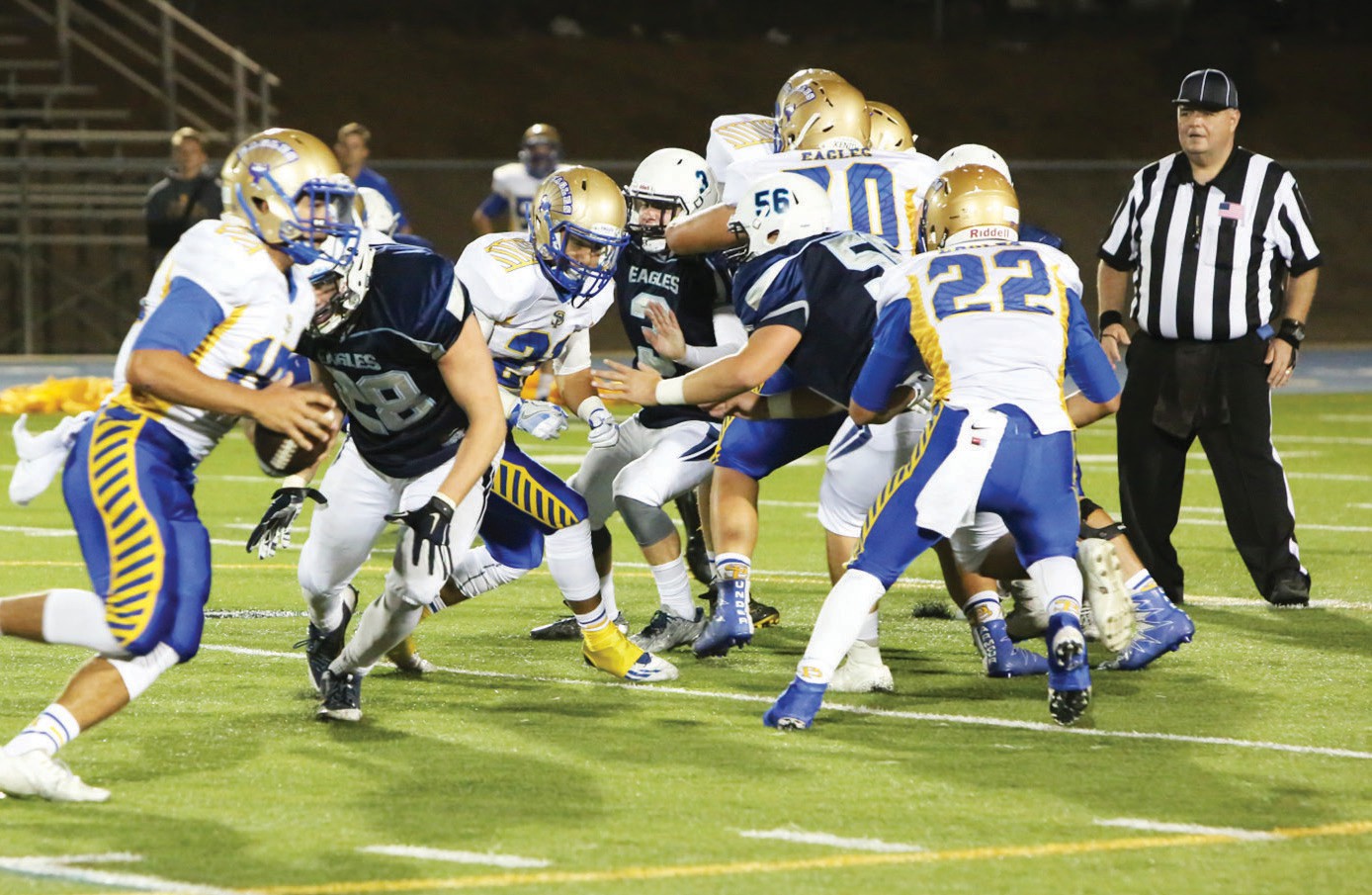 After three games of the 2016 football season, the San Pasqual Golden Eagles have gone through a gamut of experiences. They’ve won in impressive fashion (24-14 over Vista), lost in a somewhat surprising outcome (35- 14 to Ramona) and then had to endure the frustration of frittering a game way in their opener versus Granite Hills (14-12).

The latter contest was particularly galling because SP was more physical, ran off more plays and out-gained their foe by a sizeable margin. In short, they clearly outplayed the east county Eagles. But turnovers, suspect coverage on punts and a costly pick 6 ultimately proved to be the difference. “Aside from blowing up on 5 or 6 plays, I thought for the rest of that game we played really well,” says San Pasqual head coach Tony Corley, fully aware that his team probably gift-wrapped the win for GH.

As a result, the sum total of the aforementioned contests has the G. Eagles owning a somewhat misleading 1-2 overall record, which doesn’t exactly match the hoped-for expectations coming into the season. Moreover, that ledger is not indicative of this team’s capabilities, wherewithal and potential. Moving forward, look for the G.Eagles to get more liftoff and wing their way to a number of victories and a successful season.

Coming into the year, Corley believed that things aligned promisingly for his troops. With a nice mix between the senior and junior classes, the roster was also chock full of dedicated hard workers who simply love to compete. “I felt we had the talent to have a pretty darn good year,” Corley informs. And despite SP’s mediocre start, nothing that has happened yet suggests that assessment isn’t valid.

Let’s break down the key personnel that the G. Eagles will count on to make them a strong title contender in both the Valley League and hopefully, the playoffs.

Operating out of a triple option set that stresses ball control and creating space, SP has some real tools to make this offense go. 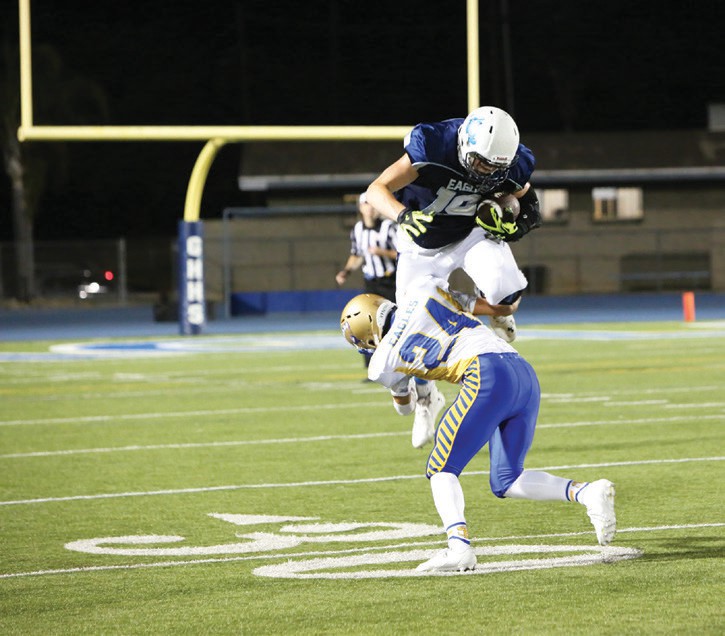 Cornerback Thomas DelMastro (24) is not only adept at coverage, he can hit as well.

injury during a scrimmage and isn’t expected back for at least five more weeks. Into this challenging circumstance stepped wideout Nick Hurst, who did have some prior QB experience from previous years.

A three-sport performer, Hurst is a smart, quick athlete who has a good arm and notable running instincts. In addition, he understands what to do with the ball, whether to give it up or keep it when the read is right. When Erdman was injured, it could have spelled big trouble without a competent alternative to fall back on but Hurst has really picked up the slack. “He’s done just a great job of coming in and giving us a chance to win,” praises Corley.

In the triple option attack, the fullback is of paramount importance and there the G. Eagles have a pair of good ones in Spencer Pugh, who has a knack for moving the chains, and the athletic Saud Carrillo. Corley envisions a working rotation with these two, although the hot hand will definitely get a majority of the carries whenever that occurrence takes place.

Other ball carriers expected to make an impression are Adam Campos, a quick runner who is a legitimate receiving threat and Samuel Serrato, a speedster who can get to the perimeter and bounce it outside.

The receiving corps has taken a hit with Hurst having to move to QB and the gifted Coner Davis having suffered the same fate as Erdman, that being laid low by a broken collarbone. This has created an opportunity for Levi Cain, who caught a TD pass in the opener and has really stepped up his game. An additional wideout who will be counted on for the foreseeable future will be Javier De La Cruz, another player showing real promise.

An ever-improving line is anchored by senior guard Marco Grimaldo, its most consistent practitioner. Center John DelMastro has decent size and has done a solid job with his calls and sight adjustments. At left tackle, three-year starter Isaac Gonzalez has parlayed his physique (6-4, 250 pounds) and knowhow into producing steady and reliable performances. 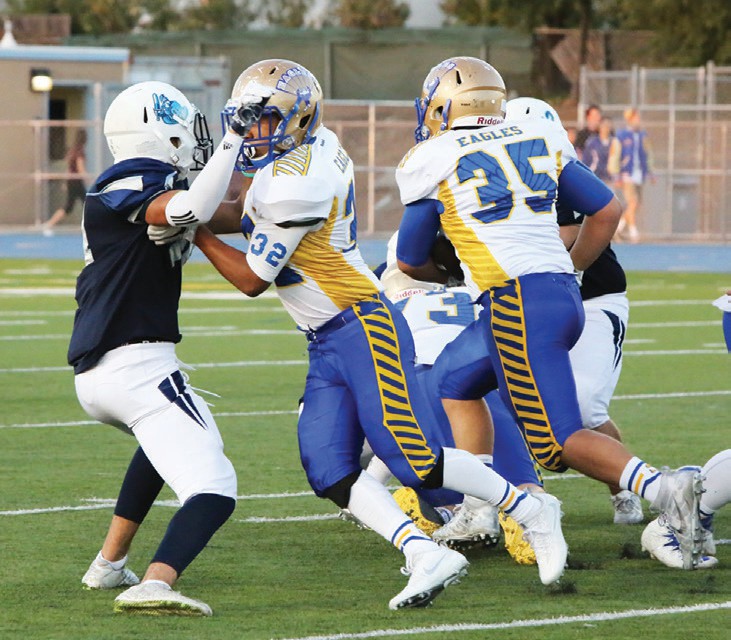 Fullback Spencer Pugh (35) is a big part of the SP triple option attack.

the Ramona tilt, the defense had been playing exceedingly well, particularly upfront. Utilizing a 4-4-3 deployment, the G.Eagles have the personnel to cause problems for just about any offenses that they’ll encounter.

The G. Eagle defensive line is a stout one that features a foursome that functions well in unison. “Cole” Hardan is a rock at defensive tackle and is proving to be exceptionally tough to block. In the pits, Daniel Wilson can really clog things up and be a disruption. And defensive ends Jaden Pabloff and Josh Coria are not only making a mark but are doing so with admirable consistency.

At linebacker, the 6-3, 210-pound Jake Salaheddine is unquestionably the ringleader. Positioned in the middle, Jake is an athletic, physical sort who can run, range from sideline-to-sideline and anticipate with the best of them. A true playmaker, Salaheddine also shoulders the responsibility of calling the defensive signals. One of the most pleasant surprises for SP has been the efforts of outside junior ’backer Juan Juache, who has been a factor with both his timely hitting and dependability.

On the backend, two guys are quite instrumental. Safety Izaiah Rocha is a tall, lanky specimen who relishes being involved and brings a physical mindset with him. Already having made an impact with a huge pick this year, Rocha is particularly aggressive coming up on the run. As far as tight coverage is concerned, no one stands out quite like corner Thomas DelMastro. This junior can blanket receivers and when he’s on top of his game, he can be of the shutdown variety.

As far as the kicking duties are concerned, Jacob Toledo is tasked with that responsibility. Able to send his kickoffs deep and near the goal line, Toledo can also put his foot to good use on field goal attempts with his range stretching out beyond 40 yards. Meanwhile, the punting chores will be divided between Hardan and Campos. When a long-distance boot is required, Hardan will most likely get the call since he already has a 50-yarder to his credit. As an aside, Hardan is an 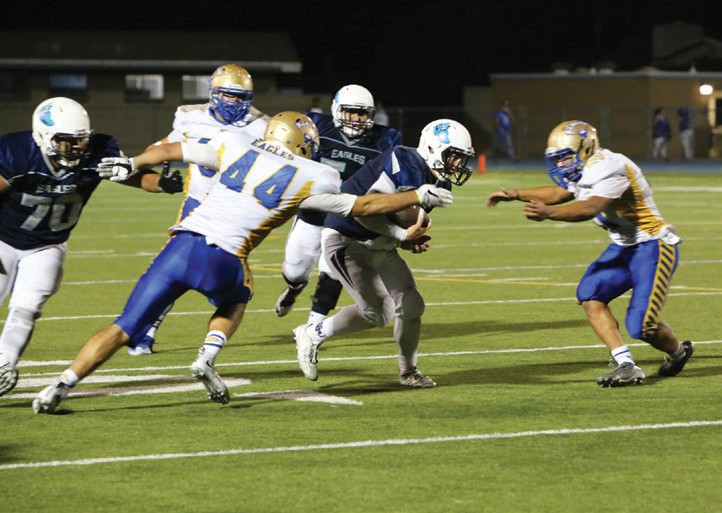 Active linebacker Salaheddine (44) prepares to wrap up another ball carrier.

absolute rarity because how often is a defensive tackle ever utilized as a punter?

As far as Campos is concerned, his leg will come into play when more directional, inside-the-20 stuff is required. Also, because of his athleticism, defenses have to play him more honestly because he brings the very real option of a possible fake and run.

Now in his 10th season as SP’s head coach, Corley is not a man to shy away from expectations. When told that another VL coach had indicated he thought the Golden Eagles were the team to beat for the league title, Corley didn’t blink an eye or disagree. “Yeah, I can see someone saying that,” he concurs. “That’s certainly one of our goals. With the experience we have and with the players that are returning, I’d say we might have the inside track. But when it comes to football, no one can ever really know for sure.”

As a proud SP alumnus who was a member of the Golden Eagle CIF championship team of 1986, Corley is highly motivated to uphold a proud tradition at SP. He’s also cognizant that San Pasqual, rather interestingly, seems to be the most intense rival for virtually every other team in the Valley circuit. As such, Corley knows that the opposition will bring both passion and commitment to any encounter with the G. Eagles. But that fact doesn’t faze Corley — rather he welcomes it. “That’s what it’s all about,” he shares. “Being in those kind of intense games.”

You can almost take it to the bank that as this season unfolds, more of those highly competitive contests will be in the offing. But despite their uneven start, there’s no reason to believe that the G. Eagles don’t have the talent and resolve to meet that challenge. And should they play up to their capabilities, a title of one type or another could very well be theirs to claim.

Yes, their takeoff hasn’t been the smoothest but don’t be at all surprised if San Pasqual embarks on a flight that could end up taking them a very far way.