Golden Eagles bear down to win rivalry game over OG 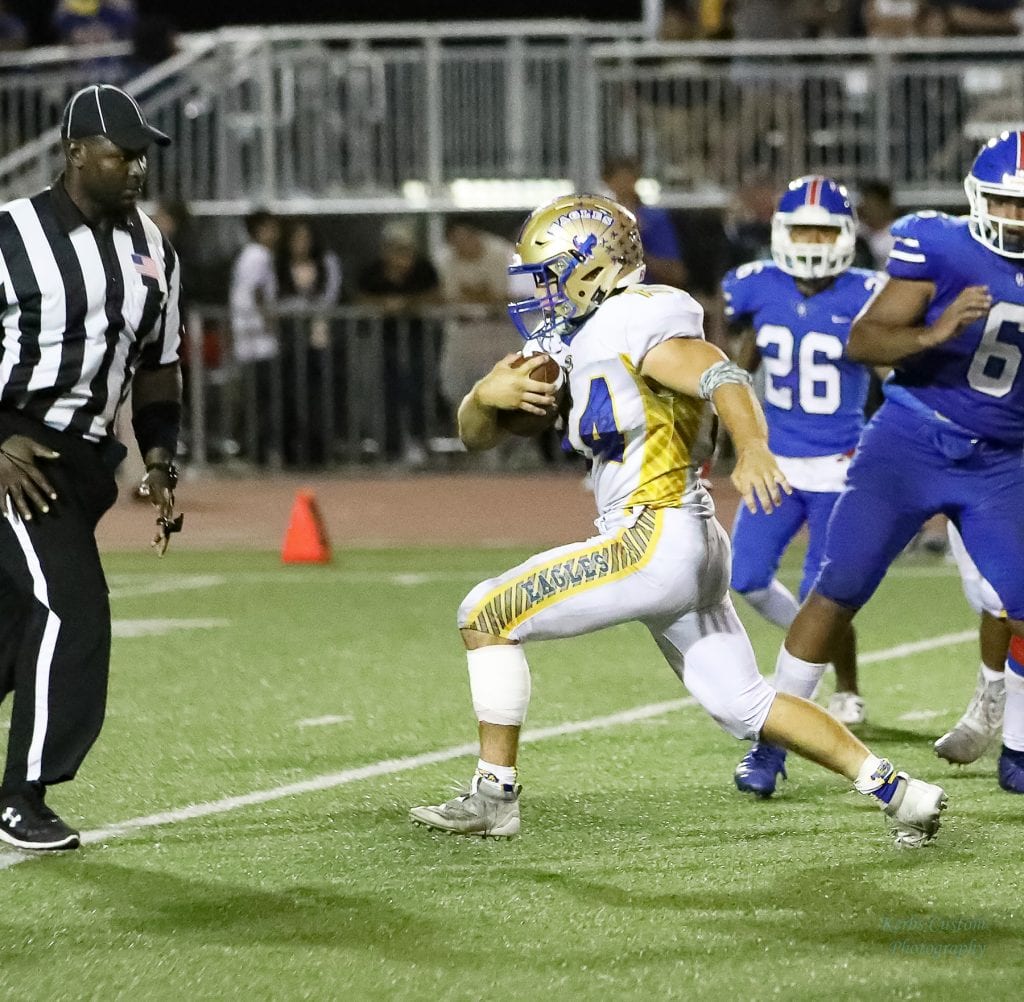 In a riveting game that featured four lead changes and was certainly one of the most entertaining in pursuit of the Battle of the Bear trophy, San Pasqual High parlayed a ground-oriented drive into a clutch fourth-quarter touchdown that enabled the visitors to outlast host Orange Glen 28-22. This marked the sixth consecutive victory for SP over their nearby neighbors just four miles up the road.

The decisive tally came when the Golden Eagles’ bullish fullback Mark Santar busted up the middle, shook free from would-be tacklers downfield and then hustled his way into the end zone from a lengthy 39 yards out with just 4:15 remaining.

The Patriots tried to respond on their ensuing possession but Chris Adams’s gallant second-effort lunge after gathering in a pass in the flat came up just short and resulted in a turnover on downs. From there, SP went exclusively with their vaunted running game and was able to exhaust the final 2:28 of the clock.

With the hard-fought win, the G. Eagles upped their overall record to a splendid 4-1 and continued to demonstrate they are a formidable team with real postseason potential.

As for the Pats, they once more showed the ability to hang and compete with a tough foe. And far from being discouraged, OG coach Jason Patterson saw plenty of silver linings that have him upbeat about his club’s prospects moving forward. “This was an exciting game that we had opportunities to win,” said the Patriots’ head man. “Yes, we missed some tackles and didn’t fill on defense as well as we could have but I’m proud of our kids. We competed hard and did some good things. We’re getting better and growing a lot so I like where we’re at as a team.”

Though this SP triumph had a number of key contributors, there was no arguing that gifted senior quarterback Trevor Jungman (17 carries, 134 yards) was its catalyst. Ballhandling and faking with remarkable deftness, slithering along with innumerable critical runs and then going up top when needed, Jungman would rush for a pair of nifty scores and toss for another. Trevor’s penchant for making the timely play was uncanny and it was his reliability and knack for rising to the occasion that ultimately spelled the difference. “He was just great,” said SP’s respected coach Tony Corley. “He’s a smart, hard-working kid who knows how to get it done.”

But it was the Pats who struck first when they took the opening kickoff and promptly marched 70 yards while burning nearly six minutes off the clock. A pair of fourth-down conversions as well as 14 and 21-yard carries by go-to running back Cael Patterson set the stage. From there, OG signal caller Ethan Villalobos sold the defense on a sweet fake to Patterson before taking a keeper around the left side for a 4-yard scoring rush that put the home team up 6-0.

However, early in the second period the visitors would respond. Making amends for a costly fumble on their initial series, the G. Eagles produced some fourth-down magic of their own when Jungman got outside on a keeper and upon finding ample space, showed some real quicks on his way to 48-yard TD dash. A successful conversion followed and now it was SP that owned the lead.

Less than two minutes later SP dramatically added to its one-point margin. Perhaps having enticed the Pats into a run-conscious mindset, the resourceful Jungman now stepped back and heaved a deep pitch down the left side of the field. Streaking behind a lone defender, tallish wide receiver Kody Ketcham was in perfect position to haul in Jungman’s on-the-money toss for yet another lengthy SP score – this one coming from 39 yards out that extended the differential to 14-6.

Now it was the Pats’ chance to provide a retort and they did so in emphatic fashion with a 65-yard sortie. The big play on this excursion was a 19-yard catch by Adams who got open down the middle and made an artful stretching grab. Four plays later and after taking a direct snap, Patterson (38 carries, 152 yards) crashed over the left side behind solid blocking for a 1-yard scoring tote. Shortly thereafter, he powered off right tackle with a determined conversion run that squared matters at 14 apiece.

By now, with the offenses obviously exerting their influence, the game had evolved into a back-and-forth, tit-for-tat contest and the G. Eagles made sure that pattern continued when they found paydirt on a third consecutive possession with just 34 seconds left before halftime. Once again it was Jungman who came up large when he somehow broke free from what looked to be a sure sack, sped to his right and then scooted into the end zone for a 15-yard payoff. Jungman’s dazzling scamper had gotten his side back out in front and ensured that the G. Eagles would hold a well-earned 21-14 edge at the intermission.

However, that margin was destined to be wiped out by a fluky play late in the third quarter. After retreating to throw, Villalobos fired a pass over the middle intended for wideout Jose Riviera that was deflected into the air. But right there waiting was speedy Pat receiver DJ Harris, who alertly gathered it in and had no trouble motoring to the house with a stunning 44-yard touchdown catch-and-run. And then Patriots – who are not averse to taking risks – elected to go for two and their aggressive approach was rewarded when Patterson fought his way into the end zone with a resolute run off the right side that put the Pats back on top at 22-21.

And for a while, it looked as though that score might stand up, particularly when the Patriots delivered an impressive goal line stand that saw sterling linebacker Julien Lesa and Damien Gainey collaborate to stuff the rugged Santar short of the goal line on a 4th down thrust from the 2.

But it wasn’t long before the G. Eagles would reclaim possession and this time a rampaging Santar (134 rushing yards) refused to be stopped on the aforementioned TD tote that proved to be the difference-maker.

For much of the contest, SP’s offensive execution and play calling was exemplary. The G. Eagles were able to keep the OG defense off balance with an assortment of runs such as keepers, counters, inside handoffs and quick-hitters. This varied scheme coupled with some splendid work by the O-line was instrumental in SP’s ultimate success. “Being both deceptive and physical upfront is something that we look to accomplish,” said Corley.

Despite the fact that the offenses stole much of the spotlight, there were still some notable performances turned in by defenders on both sides. In defeat, OG’s celebrated linebacker Lesa was an ominous presence while racking up 15 solo tackles, two of which resulted in a loss. Patriot defensive back D’Vante Wheeler was also a factor thanks to his nine total tackles and caused fumble.

For the G. Eagles, it was no surprise that heralded ‘backer Johnny Vega clearly asserted himself with a hefty 14 stops while teammate Masato Thompson was also quite conspicuous with his 10 tackles and a knockdown of a pass.

Right now, Corley believes his squad is hitting its stride and as such he sees absolutely no reason why it shouldn’t be a prime contender for a Valley (League) crown. After a bye this week, the G. Eagles will begin the league portion of their schedule with an October 4 home date versus Ramona.

In the end, the Battle of the Bear trophy remained in San Pasqual hands because the G. Eagles proved to be unflinching when it mattered most. And that says a lot about the victors and the heights to which they might be headed. 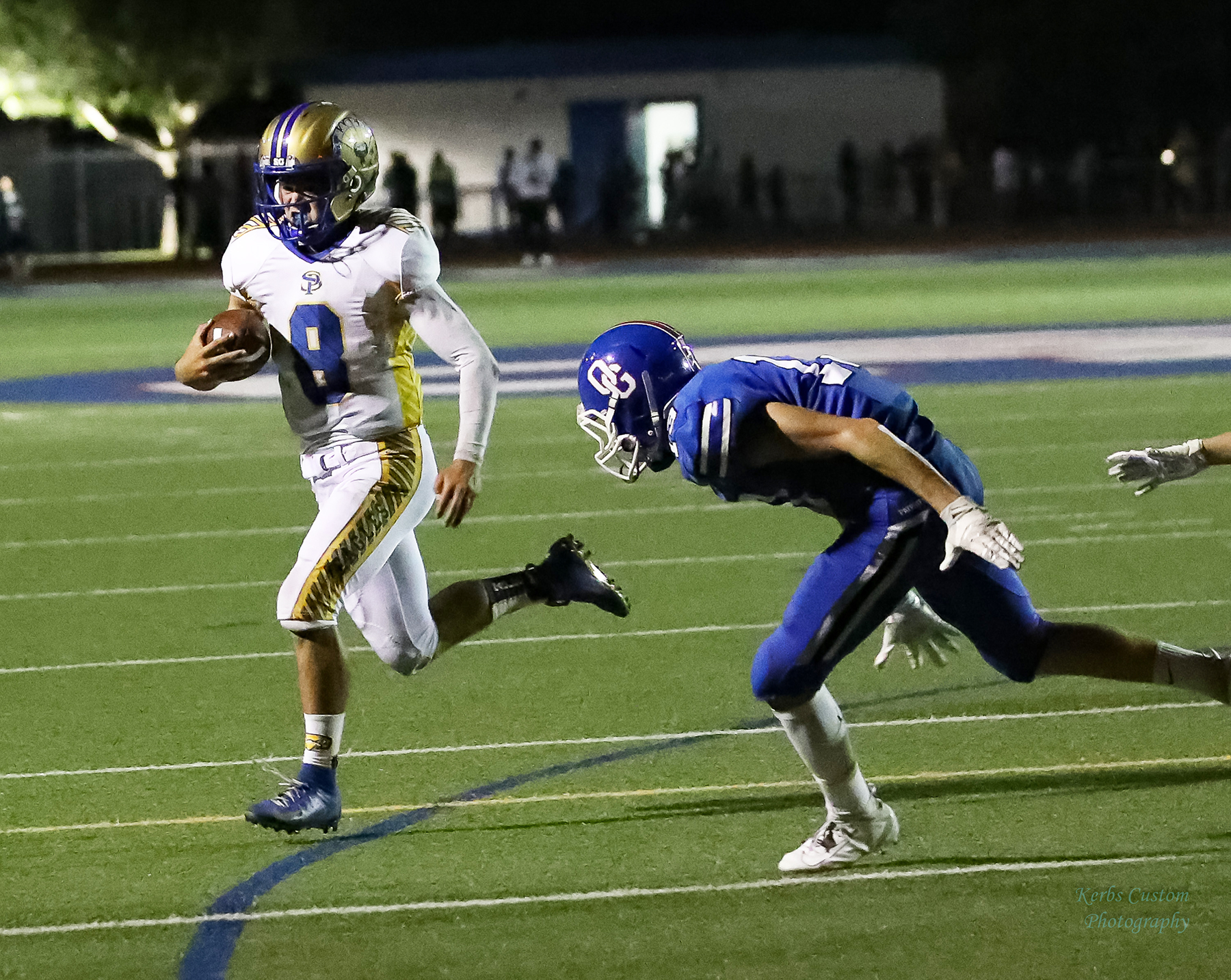 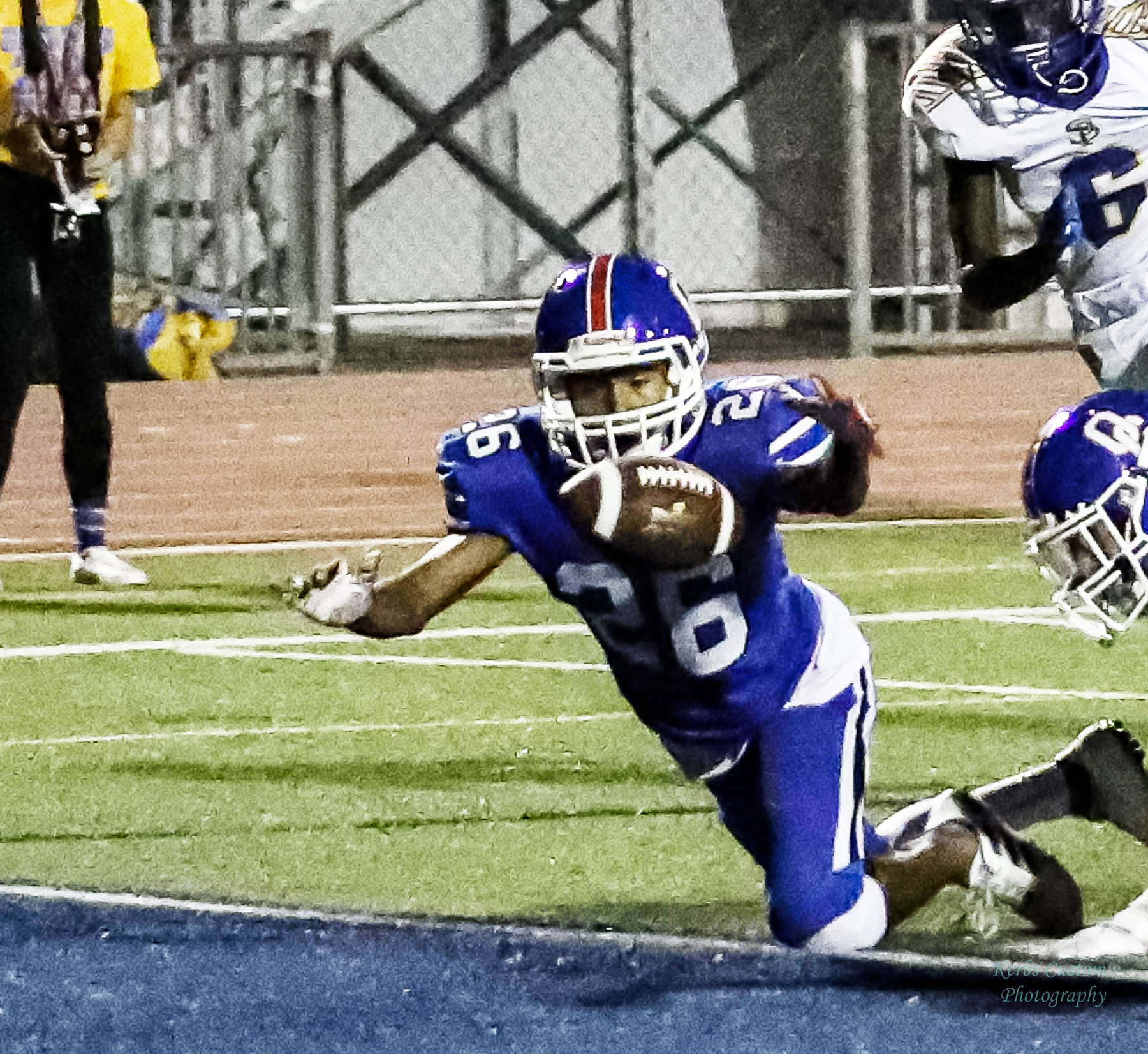 Patriot defensive back Eduardo Lopez prepares to pounce on an end zone fumble by San Pasqual. Photos by Lenny Kerbs 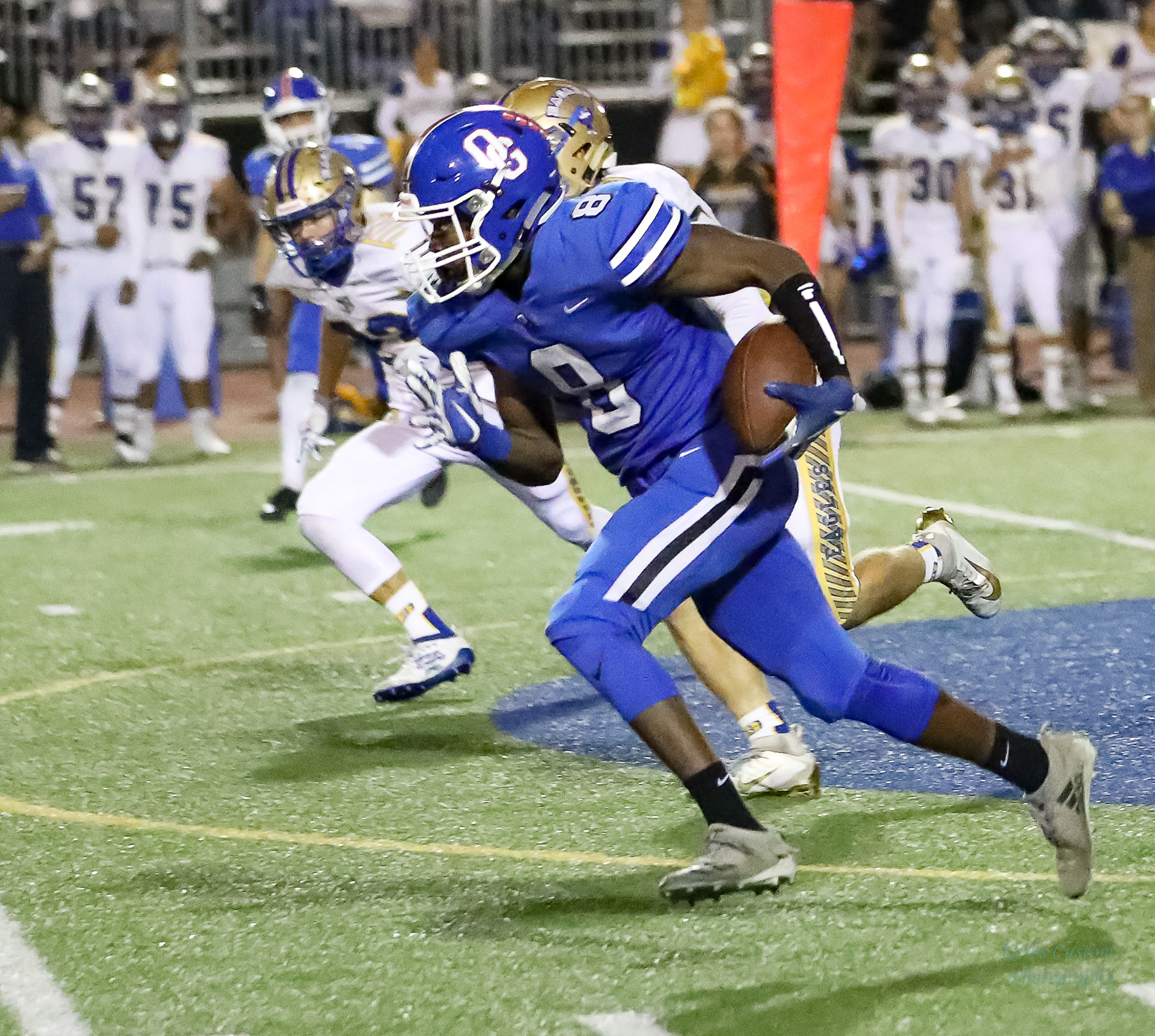 There was no catching the Pats’ fleet receiver DJ Harris after he snared a deflected pass.