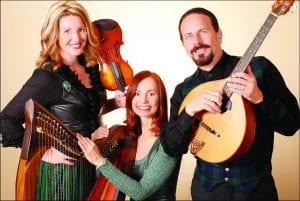 Golden Bough has performed all over the United States and Europe for 37 years.  They have produced 25 CDs.

Golden Bough will present a “Celtic Festival” of favorites to upbeat gems from Ireland and Scotland.  They have traveled the world performing on Celtic harp, fiddle, guitar, mandolin, accordion, penny whistle and bodhran, while adding their sparkling vocals to the mix.

Tickets are available 1-800-988-4253 or at www.artcenter.org.  Adult tickets cost $30. Seniors pay $20 while children, students, active military and veterans pay $10. They also have affordable family plans, as well.  Save $80 by purchasing a season membership of five (5) concerts for $70 by going to www.hiddenvalleyCCAescondido.info

If you visit that website you can download a membership form and read about the association’s season artists.