‘Gods of Egypt,’ lackluster copycat of a film 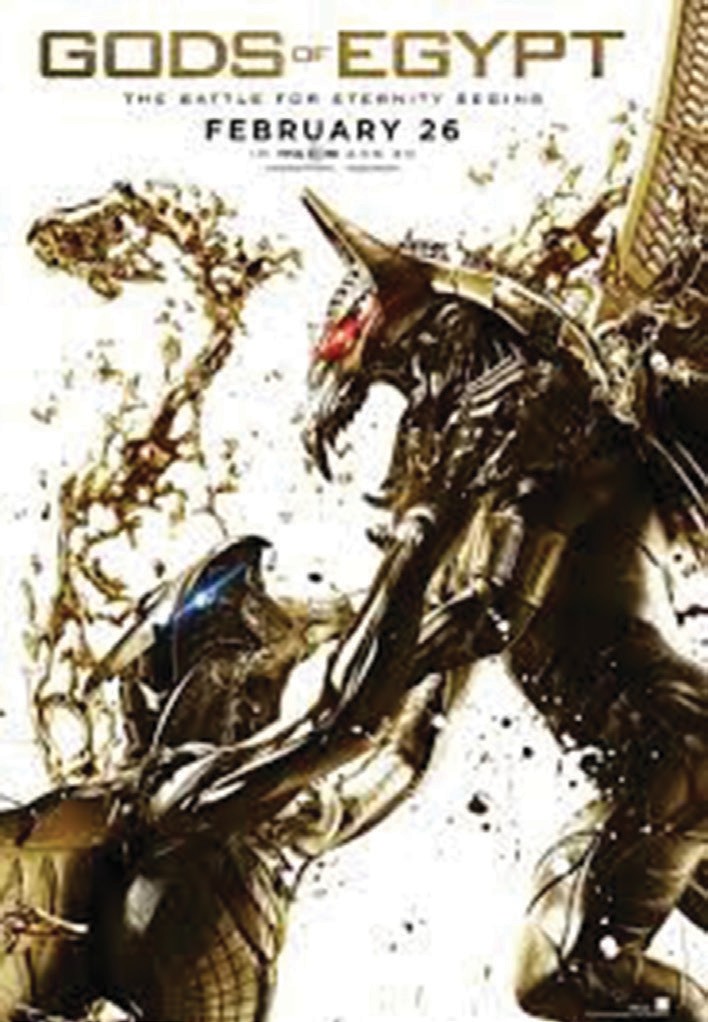 “Gods of Egypt” cost $140 million. That money was well-spent so long as the studio’s only goal was to make an incredibly shiny movie. It is indeed very shiny. But if the goal was to make an in­teresting, coherent, or competent mov­ie, then it is a failure. Actually, the goal was undoubtedly to make money, and on that level it’s even more of a failure. The film opened to $14 million this past weekend and is going to fall fast. It will be lucky if it “only” loses $100 million. This is certainly a movie that deserves to lose $100 million, except that it’s so cheap-looking that it doesn’t look like it cost $140 million. Unless of course, they paid $1 million per glint.

According to this movie, the gods of Egypt lived among the mortals, but they were three feet taller and at any moment could turn into metallic fight­ers with superpowers. Good-but-arro­gant

Horus (Nikolaj Coster-Waldeau) is supposed to take over the Head God position from his father, but his corona­tion is interrupted by his evil uncle Set (Gerard Butler), God of Darkness, who fights him for control of Egypt. Set uses a shiny distraction to win the fight and rips out Horus’s eyes, stripping him of his god powers. He’d kill his nephew, but Horus’s girlfriend Hathor (Elodie Young) offers herself to him and he com­mutes the sentence to banishment.

A year later, a mortal thief named Bek (Brendon Thwaites) sees that his en­slaved girlfriend Zaya (Courtney Eaton) is unhappy that her hero Horus is gone, so he does what he can to save him. This despite the fact that doesn’t “believe” in the gods himself. He’s awfully atheistic for someone who lives in a world popu­lated by gods who show off at every op­portunity. He steals one of the eyes that Set was keeping in a vault, grabs Zaya, and goes off to see the exiled Horus. Little snag, Zaya gets killed as she and Bek are fleeing. Bek returns the eye to Horus, giving him some of his power back, and strikes a deal: he’ll do what he can to help Horus reclaim the throne from Set if Horus brings Zaya back from the dead once he’s regained full power. Horus takes a break from self-pity and condescension long enough to agree to the deal, and the unlikely duo set off on an adventure.

Among the problems with this mov­ie is that it’s a rip-off of better movies. Horus is a god stripped of his power who has to learn humility and complete a mis­sion without the advantages he’s used to, just like Thor. Bek is a smart-aleck thief who wants to do nothing more than im­press his girlfriend, just like the Disney version of “Aladdin.” Gerard Butler screams things in an ancient setting like in “300.” The scenery is about as ugly as that desolate planet in the Razzie Award- winning “Fantastic Four.” And the CGI special effects are garbage, like in… lots of movies, though most of them don’t have $140 million for a budget.

“Gods of Egypt” brings nothing new to the mythical-adventure genre, nor is it fun as a routine outing. Horus and Bek don’t have chemistry and the scenes that are supposed to be funny fall flat. The script can’t keep its rules for the god characters straight; it can create conflict at will by saying “gods can’t do that” and get itself out of any corner by saying they can do whatever they want.

But the worst thing about the movie is that it just looks like a cheap mess. The only special effects that are crafted with care are the shiny metallic super- suits, and they’re barely even featured. $140 million was wasted making this movie, and you’ll be wasting your nine bucks if you go to see it.

One Star out of Five

“Gods of Egypt” is rated PG-13 for fantasy violence and action, and some sexuality. Its running time is an over­long 127 minutes.