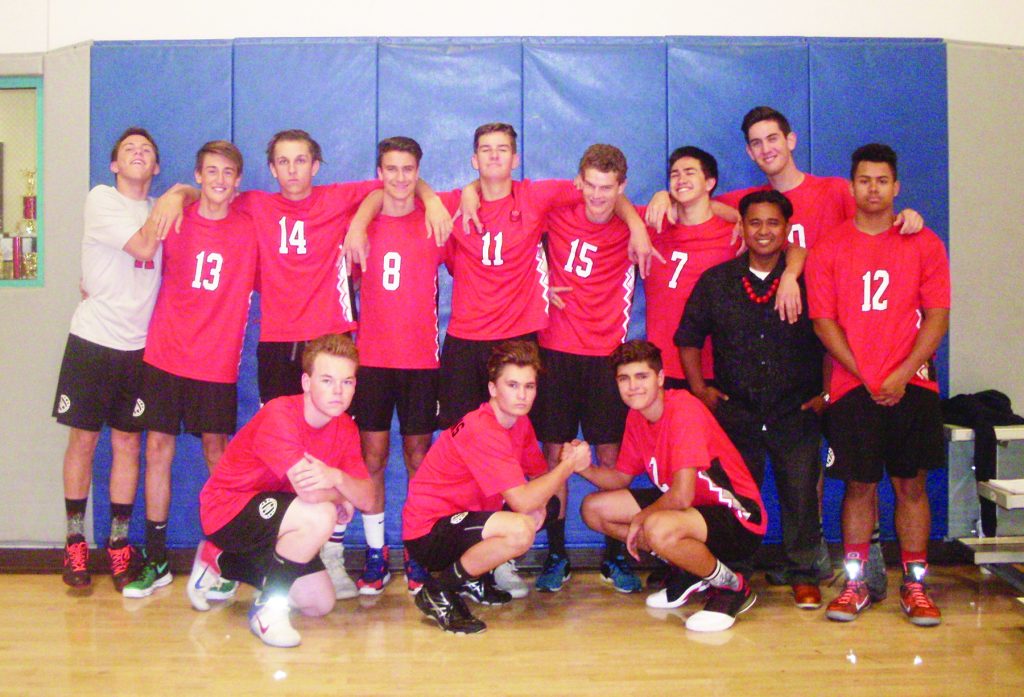 Classical Academy’s boys’ varsity volleyball team is full of athletes determined to make the most of their time on the court.  These young Caimans have a definite love for and enjoyment of the game, but their energy is mainly spent on focus and improvement.

“We don’t come to mess around,” says Michael Pierce, “it’s about having fun but we get serious at game time.”  With clearly outlined goals and a concentrated mindset, these boys make it their jobs to be unstoppable.

Already sharing their talent and passion for volleyball, these athletes have formed a team that operates as an effective and precise unit.  “We’re really focused,” says Christian Nowtash, a junior in his third year on Varsity.  Nowtash credits the team’s “momentum and chemistry” as a key factor in their success.

“We have a strong bond, I love everyone on this team,” Pierce explains.  While this is only Pierce’s first year on Varsity, he has already found his place in the team and feels completely at home.

Not only do the boys get along with each other but they also mesh well on the court.  Each member brings a unique skillset and background, but they are of one mind when it comes to playing volleyball.  “We come together at game time,” Christian explains.   Going into games, all outside issues or past experiences are left behind and their sole uniting purpose is their plan for victory.

Each match is appreciated as a new and serious topic that is given the upmost concentration by every member.  Coach Jo Milo boasts that the team unites purposefully when it comes to strategy and effort.  “They come in with a plan,” he explains.  The players give their full and undivided attentions to the upcoming game.  Describing their tactics, Milo reveals, “they assess what’s working and what needs to be controlled—they’re very methodical.”  They combine talents in order to form a cohesive and organized team that is prepared and efficient.  “They get nitpicky and talk things out,” Milo continues.  During games, he is always impressed by their concentration and momentum.  “When they get going you can’t even talk to them.  Once they get going they go hard.”

Every conversation with the athletes, as well as the coach, is brought back to the goals and strategies the team has.  These young athletes are constantly processing what needs to be improved, what’s been effective, and how to best work together.  Pierce strongly believes the team’s strength is found in each player’s wide variety of skills.  “Our bench has a lot of depth,” he asserts confidently.  With each player having such a diverse skillset, they are all able to understand the game more cohesively.  This enables them to confidently work on strategies and consider where each player is most needed.

This team mentality, however, does not leave the boys unaware of individual strengths.  Pierce admits, “We all have the potential for greatness and some people shine but that’s not what matters.”

While not ignorant of their talents, the boys are very aware that their victories are a team effort and based in overall success.  “The team is a lot about the people, when the team plays as one we all have to be calm and considerate,” says Pierce.

In addition to working on improving their strategies and their abilities on the court, they understand the need to continue growing as a team.  The captain, Evan Lipe, plans to “work on jelling together.”  He explains, “the more we know each other, the more we can work together.”  The athletes have a sincere maturity in their understanding of what it takes to be a part of a team.  “They talk about goals and growing into them,” says Milo.  “They have ups and downs—every practice is a stepping stone.” Throughout games as well as practices, the team members are consistently focused on their current goals.  Every moment spent as a team has an intentionality that is unwavering.

It is easy to see why this team has come out on top after almost every single league game this season.  They have solidified their spot at the head of their league, having lost only one game and maintaining an impressive overall win loss of 20-10.  Milo is immensely proud of the team this year, boasting of not only their intense athleticism but also of their genuine respectfulness and overall attitudes. “There’s definitely a team culture,” he says, “they have a real respect for the game and each other.”

These Caimans have found their passion and strive to constantly improve it.  While they greatly enjoy the sport and the relationships built through teamwork, their dedication and motivation truly dominate their culture.  “We have a lot of fun but we’re looking to win so we’ll use whatever emotion is necessary,” Pierce says. While this may seem overwhelming, Lipe states assuredly, “I wouldn’t trade it for the world.”