Glamping: why work at camping when you can play? 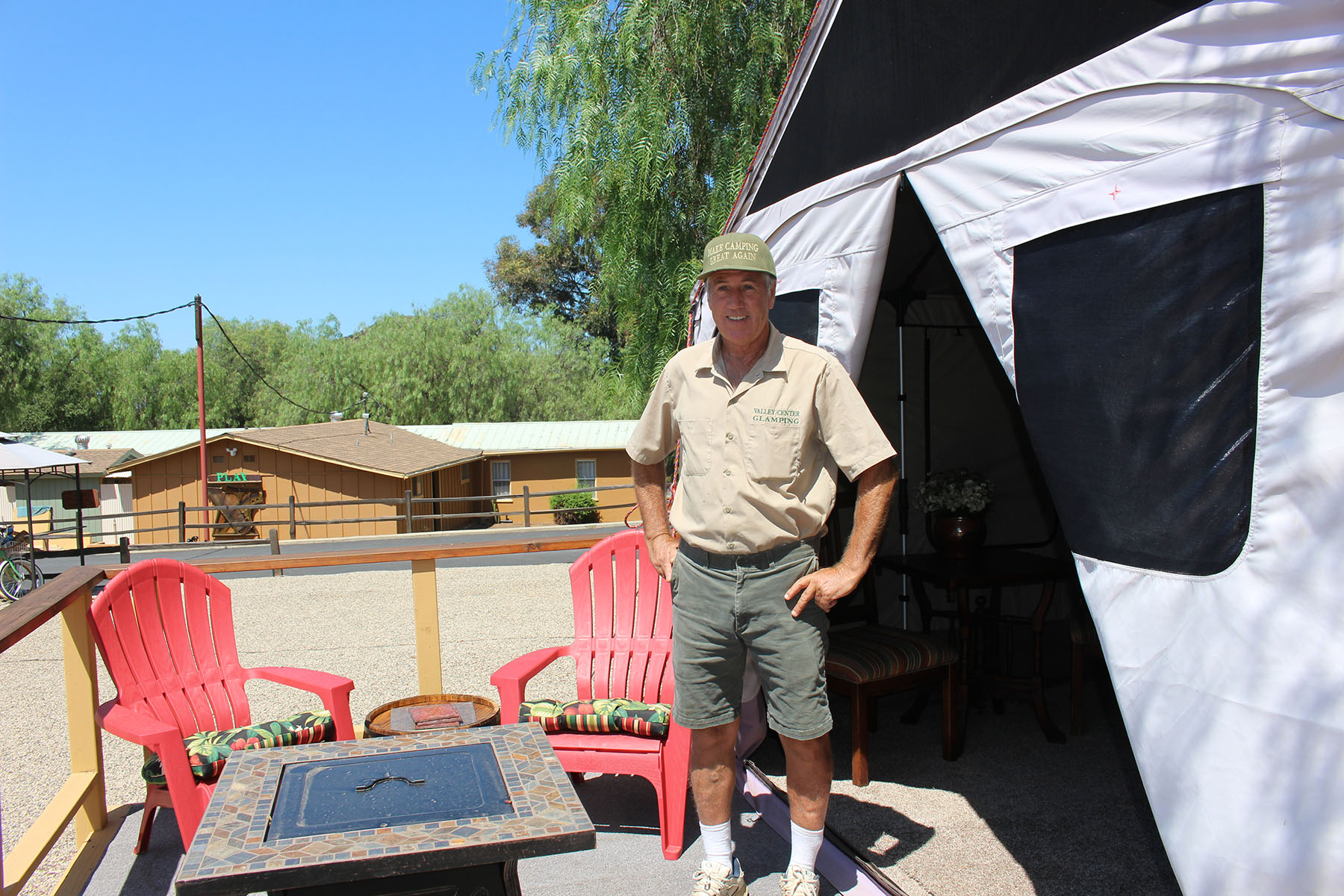 Scott Wilson on the deck of one of his luxurious Safari tents.

It’s a pretty succinct slogan: “Camping equals work and glamping equals play.” Some folks like to do the MacGyver thing and work at finding just the right campsite; hammer in the pegs and set up camp. Others want to skip the hard part and get right to the fun. That’s where “glamping” comes in.

Sometime in the near future; perhaps around the time you are reading this article, “Valley Center Glamping” will open for business on the 34 acre property just off Mac Tan Road that has gone under many names, one of the most recognizable and enduring being “Camp Caroline.”

According to the Valley Center History Museum, Camp Caroline was originally known as Happyland Sanitorium back in 1924. Its proprietor was the faith healer “Mother Caroline,” (Caroline Beran Hoertig) who died in 1960 at age 81. It was operated for 49 years by the Lutheran Laymen’s League as Camp Caroline. For several years it was the meeting place of the Light of the Valley Lutheran  Church. Its most recent incarnation is “Broken Rock Ranch.”

And now comes Scott Wilson, who calls himself a “serial entrepreneur.” He has been starting up startups “forever,” as he puts it. He has been a licensed contractor for about as long, which helps him to employ “sweat equity,” on projects such as Valley Center Glamping. When I met him he was wearing an outfit that might be described as “safari,” but without the Jack Hanna hat. Instead he had a cap with the slogan: “Making Camp Great Again.”

He gets lots of people asking where they can buy the cap. “People love the cap even if they hate Trump,” he says.

Wilson is a friendly man who looks and sounds a little like the actor Adam Sandler. If you close your eyes you could imagine yourself on the set of some Sandler movie you’ve never seen before.

He’s been working hard the last few weeks to get Valley Center Glamping ready to open. He indicates the property with the sweep of his hand. “It’s not hard to see the value in this—especially when there is nothing like it for a hundred miles.”

Because he is a veteran contractor, he knows that such projects are often killed at birth because their developers didn’t research the necessary permits.

One of the attractions of the Broken Rock Ranch property for Wilson was that it is permitted for activities such as those that a “glamping” site normally offers. To offer live music, and to sell food. To host weddings and receptions.

He’s starting with 12 safari style tents. He will add more as the money allows with the ultimate goal of 40 safari style tents. They will be located in the center of the property. Eminently portable, they can easily be broken down and moved in a matter of hours. The building that housed bunks for church conferences will now host massage, aromatherapy, essential oils and other amenities. Wilson is starting with a staff of six that will eventually expand to 14.

Many months ago, Wilson had an idea to find a ranch and renovate it into a camping spot. “I realized that what I was doing was something that was huge in Europe, where they have been calling it ‘Glamping.’ ” A portmanteau of “glamourous” and “camping;” it implies all the comforts, but inside a pleasantly large tent with a bed you don’t mind rolling out of—and from which you won’t get a sore back!

When Wilson found the property he said, “It’s perfect! Serene. Lots of nature. You don’t have to drive three hundred miles to get here. A lot of my campers will want to go to the casinos but don’t want to stay there. A lot of people know how expensive it actually is to stay at a casino. Here for $200 a night you get a nice room, access to a full-service restaurant on site, live music every night (acoustic on the weekdays, amped on weekends, both playing at what was once the old church.”)  He already has a waiting list of more than 100 wanting to find out when he will be open.

There will be a coffee bar, shower facilities, an activities room and a pavilion to where you can gather and socialize. “People ask ‘What are people going to do during the day?’ My problem has been what to cut!” says Wilson.

“Glamping” is such a new concept that many places that once advertised themselves as something else for years are changing their names to say that they offer “glamping.”  There are different types of glamping sites.  The Valley Center one is a “scout” glamping site, which means it has restrooms and showers.

Being at the spear’s point of a new industry doesn’t bother Wilson. He’s always preferred to pioneer concepts to being a business follower.

Because of the nature of glamping, you don’t worry about competition. “You could have five in Valley Center and it would be like all the places to eat at Restaurant Row,” says Wilson. However, currently there aren’t that many of them. Ever since Wilson announced that Valley Center Glamping would soon be opening, he has gotten hundreds of inquiries.

“I love Valley Center,” says Wilson. “I’m working really hard to make the community happy that we are here. Some businesses ask ‘How much money can I make?’ I prefer to ask, ‘How many can I make happy?’ ”

So how does glamping work? “Picture  a twenty-four square foot wooden deck with a private patio and comfortable seating and a fire pit—all in front of a huge safari tent,” says Wilson. “When you open it you have a luxury hotel room. No need to set up the tent yourself. You’re camping! My theory is that camping equals work and glamping equals fun.”

Over the years Wilson has found that many people like to tell him how to do his business. For example, many people wanted to suggest different color schemes for the buildings. Instead, Wilson gathered soil from different parts of  the property and leaves from the pepper trees and came up with a color palette that would complement those colors: mustard and teal.

“One of the first things that people told me was ‘you’ve got to get rid of that cross,’ at the entrance the old chapel. Well, it’s part of the history of the place, and I’m not changing the look. I’ve kept the cross!” he said.  He did change the name though, to the Line Camp Music Hall.

Cleaning up the property was a huge chore, and in the course of doing it, Wilson made several discoveries. On an old survey map he found references to the “oak chapel.” After three days of cleaning he uncovered outdoor wedding pews amidst an oak grove. “They had weddings there in the 1950s and 60s,” he says.

Even if Valley Center Glamping is a fabulous success and an obvious money-maker, Wilson doesn’t think he would sell it. “I have plans for this place and I finish what I start. When I do something I plan it out and then carry out the plan to the end.”

How will he know when it’s a success? “Success is when everybody is enjoying it!” he says.

The market he is appealing to is the 40 and older and the Millennials, who make up 31.5% of those who visiting glamping spots. “Three and a half million regular campers say they want to try clamping for the first time,” he says. “Whether there are just a few glamping sites or even a few hundred, that’s a big market.”

The best part of glamping, he says, “Is staying in a site that has a sense of community and well-rounded with lots of activities. If it’s also beautiful and well maintained—the rest is icing on the cake.”

These are adults-only facilities. No one under 18. “Who wants to spend $200 a night and not get any sleep?” says Wilson. This is not uncommon. Branson cruises offers adults only cruises. “Some people want to experience their youth again and don’t want to encounter screaming kids!”

Valley Center Glamping also won’t be “pet friendly.” “It’s hard to keep it neat when you have to clean up after dogs, which we love,” he said. But it’s the trend among the nicer glamping spots, who declare, “Sorry, no pets!”

Wilson plans to open a restaurant on the property that will be the kind of dining experience that people all over town will want to discover. “It will be everything you would cook if you  could do it while camping. But elevated!” He has in mind an executive chef and he will open the place to the public. “Pricing will be very fair. It’s here to support the community,” he said.

The latest from Scott Wilson on the opening for Valley Center Glamping came early last week: “Looks like Mid-August opening, I need two weeks to get some of these items complete.”