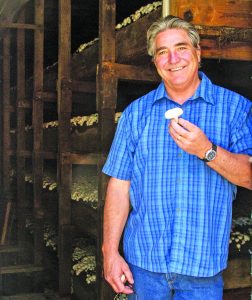 Fortune shined on local agriculture the day Gary Crouch walked into his first board of directors’ meeting at the SD Farm Bureau office.

It was in the early 90’s and Gary’s dad, Bob, had invited him to come along.  It’s certain that Bob knew what he was doing because Gary continued to attend meetings, quickly aligning himself with other members, and ultimately proved to be the generous leader he is today.   As our newest Farmer of the Year award recipient, Gary personifies what it means to succeed in the business of farming and combine his passion to share the importance and beauty of what he does with others.

Gary’s path to success started in the sixties while growing up and attending schools in Los Altos Hills, California.  It may come as a surprise to those just getting to know him, but he did not enter into agriculture at the time.  Instead, he moved to Del Mar in 1976 and began a thirty-year career in construction.  “Over the years, I pretty much filled every position in the industry,” he said.  Gary continued, “I was Vice President for the Baldwin Company, President of the home building side of McMillan Homes, and Vice President of Land Development and Home Building for DR Horton in San Diego.”  During this time, he developed his sense of business and the importance of a strong bottom line.

In the meantime, Bob Crouch had “retired,” purchased Mountain Meadow Mushrooms as a hobby, and was in the process of standing it back up into a successful business.  Gary was intrigued.  Together they combined Gary’s construction background with Bob’s engineering and finance background and proceeded to grow the business into a substantial operation.  “The idea of continuing a family business appealed to me, plus I liked the numbers and function.  I could see it had real potential.”

Gary and his new partner, Roberto Ramirez, purchased the business in 2008.  The business “mushroomed” under the team and today produces an average of six million pounds yearly, sold locally and nationally.  “We’ve turned it into a machine,” Gary beamed.

Meanwhile, Gary continued to attend those Farm Bureau meetings and became a director himself, also serving on multiple committees.  He saw the benefit of staying connected and continuing to learn about local agriculture, monitoring regulations, and pushing back against the challenges experienced by all farmers.

He also found a multitude of ways to share his passion with the public and support the Farm Bureau simultaneously.  He was one of the first to use the Farm Bureau 365 logo on all of his packaging, thus promoting the idea of buying local.  He has both chaired and fundamentally made two Farm-to-Table events into phenomenal successes and has regularly opened his doors to the yearly Farm Day Tour, becoming one of the most popular stops. 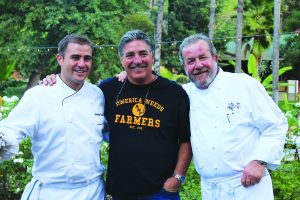 “It’s important to bring the public in to see your operation and experience farming first hand.”  Gary’s expression turned serious for just a moment, “They need to see our benefit and also learn of our challenges.  An informed public sees the importance of keeping farming operations local by voting in our favor during elections.”

Gary even offers a “free mulch” program to all interested gardeners, schools and institutions.  Mountain Meadow Mushroom operates under a unique recycling system where it processes used straw from the Del Mar Racetrack, cottonseed hulls and meal from the cotton industry, grape pumice from the wine industry and gypsum into a sterile, nitrogen-rich compost which it uses through three harvests.  The resulting leftover is still a rich compost, perfect for mulching, which he then offers for free to the public.  Smart and generous, indeed.

When Gary believes in something, he believes big!  His generous spirit and jovial nature is compelling and his support for farming is palpable.  In true spirit he has trouble accepting the accolades he so readily deserves. “I wish I could’ve done more,” is all he adds.  Thus, his award as the 2016 Farmer of the Year is clear in purpose and salute.  We sincerely thank Gary for his dedication and friendship.  He’s a great farmer who is also an incredible guy.