Game of the Week: 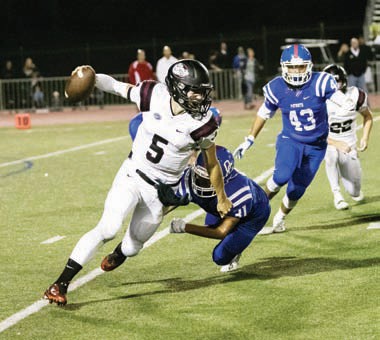 Classical’s Caleb Moen was a threat with his elusive scrambling. Photos by Lenny Kerbs

Classical Academy was a game and gritty bunch last Friday night as they hung tough for three-plus quarters. But ultimately, the 34-17 loss that the Caimans suffered at the hands of host Orange Glen could be distilled down to one irrefutable fact; they simply had no answer for the Patriots’ flashy and, at times, unstoppable wideout Malachi Russell.

Throughout the night, but particularly in the decisive fourth quarter, Russell turned quick sideline passes from talented quarterback Blaine Bailey into an assault that was both difference making and devastating. Once he latched onto the ball, Russell sped, weaved and juked his way to a true tour de force performance (9 catches, 143 yards) that featured three touchdown receptions and saw him literally take over the contest. Onlookers were wowed by his artistry and his teammates were jubilant over the way Russell had, in short order, transformed a close and highly competitive game into one that the Pats won going away.

But make no mistake, this was a genuine dogfight for much of the contest. It was also a highly entertaining and riveting game despite the spate of penalties that were called by the referees, who literally littered the field with their yellow flags. It seemed as if the zebras were intent on testing their arms as much as the highly accurate Bailey.

In the season opener for both squads, the Caimans got off to a bang-up start when they took the opening kickoff and traversed 70 yards for an impressive score. Quarterback Caleb Moen kept the drive going with a clutch 11-yard completion and a nifty 18-yard run in which he avoided pressure and expertly veered to the outside. From there gifted back Ty Patterson, who was a factor for much of the 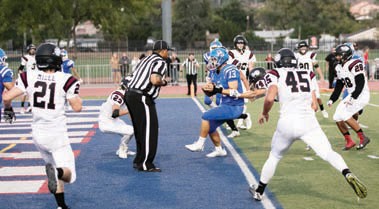 evening, did the rest. Patterson toted the rock on four consecutive plays, the last of which was a splendid 22-yard effort in which he jumped outside, shook off a tackler and dashed to pay dirt. With 7:13 left in the first quarter, the Caimans had struck first and led 7-0.

On their second possession of the night, the Pats replied. Taking advantage of a very short Caiman punt, a shortcoming that would plague the visitors throughout, OG found itself with primo field position at the Classical 36-yard line. A pair of Bailey-Russell hookups netted 27 yards and set the stage for the QB to fake a pitch and finding nothing but virgin turf staring him in the face, Blaine simply hoofed it into the end zone from 6 yards out. In keeping with an aggressive mindset that they employed throughout the proceedings, the Pats went for the two-point conversion and were rewarded when Bailey found a slanting Russell that staked the hosts to an 8-7 edge.

But back came the Caimans in the second period. A magnificent 40-yard rumble by Jaxon Racciato in which he showed surprising speed before dragging defenders, put Classical in business inside the 10-yard line. Four plays later, Moen displayed a nice sleight-of-hand before keeping the ball around left end for a 1-yard go-ahead tally. Once more, the Caimans held the advantage, this time at 14-8.

Classical would later tack on a 17-yard Jk (Stet) Haman field goal to its total and left at halftime with both the lead (17-8) and a most positive vibe emanating from its’ sideline.

Unfortunately, the Caimans couldn’t sustain that momentum and were blanked in the second half. Meanwhile, the OG offense would crank it up after intermission and once the team had regained 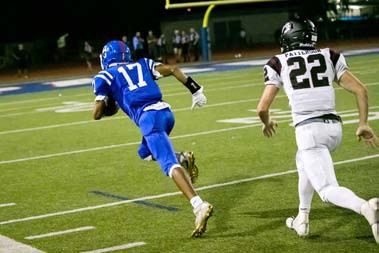 Malachi Russell leaves defender Ty Patterson in his wake while heading towards a spectacular third touchdown.

the lead, the Patriot defenders came on strong and played with increasing aggression.

Russell got the Patriot comeback started in the third quarter when he gathered in a dart of a throw from Bailey and with a host of blockers providing him a convoy, scampered into the end zone virtually unmolested from 7 yards out. Drawing within 17-14, the Pats were now positioned for a memorable fourth-quarter barrage.

Again the beneficiary of a poor punt, OG needed to negotiate only 24 yards and did so in just four plays. The 7-yard capper was provided by back Jacob Guzman who went off guard and took advantage of a gaping hole. Despite the conversion attempt being blocked, the Pats were back on top at 20-17 with less than three minutes having been played in the final stanza.

The Caimans, to their credit, did manage to mount one last abbreviated march. Advancing the ball just inside OG territory at the 47, Classical was faced with a fourth-and-long but gamely went for it. And if the execution had been just a shade better, the gamble would have paid off. Utilizing a creative double pass, intended receiver Jake Gilbert had gotten behind the Pat secondary and was all by his lonesome. But the toss was under-thrown and Gilbert had to noticeably contort his body in a desperate attempt to reach back and grab it. Though he did get his fingers on the ball, it proved to be too difficult a catch to hang onto and the pass fell incomplete. Though no one knew it at the time, Classical’s hopes were all but gone.

Now, primed to put this one away, OG immediately followed up after Gilbert’s near-miss. Faced with a second-and-long from the Caiman 27, Bailey wisely 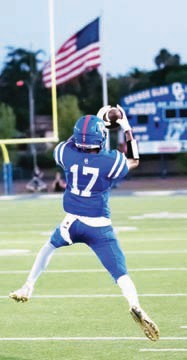 The electric Malachi Russell latches onto one of his 9 receptions. Photos by Lenny Kerbs

dialed up Russell’s number and the boffo receiver was more than ready for the call. Quickly latching onto Blaine’s pitch, Russell used his elusiveness to duck a defender before shifting into overdrive and hightailing it down the left sideline for a backbreaking score. A successful Guzman conversion run enlarged the Pat margin to 26-17 with just 4:02 remaining.

And yet, Russell’s electric night wasn’t quite over. One more highlight-reel play was forthcoming. After the Pat defense had once again stymied the Caiman “O,” Russell concluded his memorable outing with a spectacular finish.

On first down from the Pat 48, Bailey flung his final pass toward the boundary where Russell awaited. Stretching out his hands and arms to quickly collect it, the splashy junior was soon off to the races once more. After doing a ballet-like sidestep to slip a tackle, Malachi accelerated in haste and it wasn’t long before he had left numerous defenders in his wake, the home crowd roaring with each step that brought him closer to the goal line. When he crossed it, he had put an exclamation mark on an effort that had to be seen in order to fully comprehend it. Russell had entertained those in attendance with acts of derring-do that will be long remembered.

Besides Russell’s heroics, OG had some other big-time contributors. Bailey (21 for 32, 281 yards) threw with zip and precision and ran the offense with aplomb. Receiver Billy Mercado came up with a number of clutch catches, particularly on slant patterns that showed his mettle and dependability. Running back Tyrone Hickson demonstrated a nice bounce to the outside that bodes well for the ground game moving forward. And on defense, senior end Nikola Kresovich was a monster down the stretch, racking 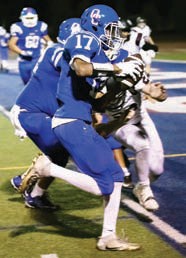 Wideout Malachi Russell squeezes inside the pylon for a Patriot score.

And to be sure, the Caimans also had their share of standouts as well. Moen played with great heart and was often masterful in eluding OG defenders and turning seeming loss yardage situations into big gains. Patterson was a revelation with his multi-dimensional running. Quick to the hole but also tough when contacted, he amazed with his cuts, spins and knack for finding an opening. A select few guys look and carry themselves like the real deal when they have the rock and Patterson is one of them. On defense, Caleb Crist was active and was in on plenty of plays while Jacob Mizel had his moments making tackles and providing coverage.

Despite a few hiccups that included too many flags and three turnovers, the Patriots gave legitimate credence to Coach Jason Patterson’s belief that his team is going to be an exciting, dangerous and opportunistic squad, particularly on the offensive end. With its assortment of weapons, OG shows every sign that it will be difficult to contain when it possesses the ball.

Overall, Patterson was satisfied with what he saw from his charges. “We were a little sluggish in the first half,” the coach appraised, “but after that we did a nice job of cleaning things up and making some mental corrections. And we played a lot smarter. Generally, I was pretty pleased with the effort.”

The Patriots will seek to start the season with a second straight victory this Friday night when they again play host, this time versus esteemed La Jolla Country Day. It figures to be a tough tussle but if Russell continues to go off as he did against the Caymans, the OG side of the scoreboard should reflect some big numbers once again.