Game of the Week: Cougars surge past Ramona 68-59 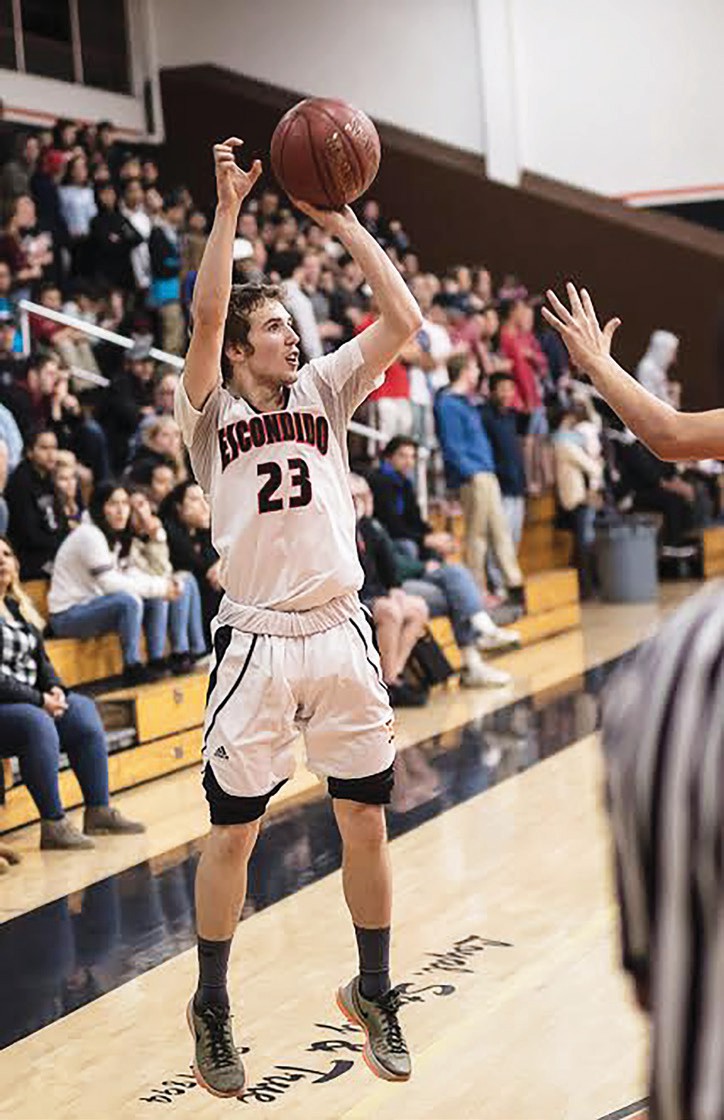 Guard Wes Jones, who finished with 16 points, really heated up in the second half versus Ramona. Photos by Lenny Kerbs

Make no mistake about it, the Escondido High boys basketball team is starting to come on. Not only that but Coach Paul Baldwin’s club is also beginning to generate some real buzz.

Suddenly, the Cougars have taken a decided step up and as such, they now loom as a bona fide contender in the just underway Valley League race. Based on their recent results, the Cougs figure to be one tough out for the balance of the regular season and presumably into the playoffs.

In the latest example of its resurgence, host Esco parlayed a massive third-quarter surge last Friday night into a lead that it would never relinquish en route to a noteworthy 68-59 victory over Ramona, a team expected by many to finish atop the VL race. This was clearly a statement game with each squad coming into the fray undefeated in league play. Moreover, there was no denying that the stakes were high. Even though the league schedule is still in its early stages, this contest held major implications because it would put the victor in a favorable position from which to make a strong run towards the title. Get a win here and things would definitely be trending in a most positive direction.

The Cougars (5-12, 2-0) were coming off a key 59-56 triumph over Fallbrook in their VL opener. That was a good indication that Escondido was putting it together but its deceptive overall record (more about that in a moment) had created doubts about the team’s viability in the minds of those unfamiliar with the road that the Cougs had traveled.

But if you drill down deeper, you become aware that Esco’s non-league slate was a mighty challenging gauntlet. Six of the foes that the Cougars faced were ranked. And in most of those contests, Baldwin’s team had been competitive for much of the time. But inconsistent fourth quarters and difficulty in finishing had made wins somewhat hard to come by.

However, the perceptive Baldwin knew that these testing games would steel and equip his guys, providing great preparation for the upcoming league circuit. Hardly discouraged, he felt confident that the Cougs would respond when the VL bell went off. So far, Baldwin couldn’t be more right on.

In Friday’s pivotal tilt, a seven-point spurt by the Bulldogs was the main catalyst in helping the visitors achieve a 14-11 margin by the end of the first period. But the Cougars were able to go on a 7-3 run of their own which helped the home team draw within one, 23-22 at the half.

But what had gone on in the first 16 minutes was downright tame compared to what was about to take place in the third quarter. Esco’s home court was about to turn into a pyrotechnic show. And it was guard Wes Jones who lit the fuse.

A dangerous shooter, Jones had struggled before intermission, 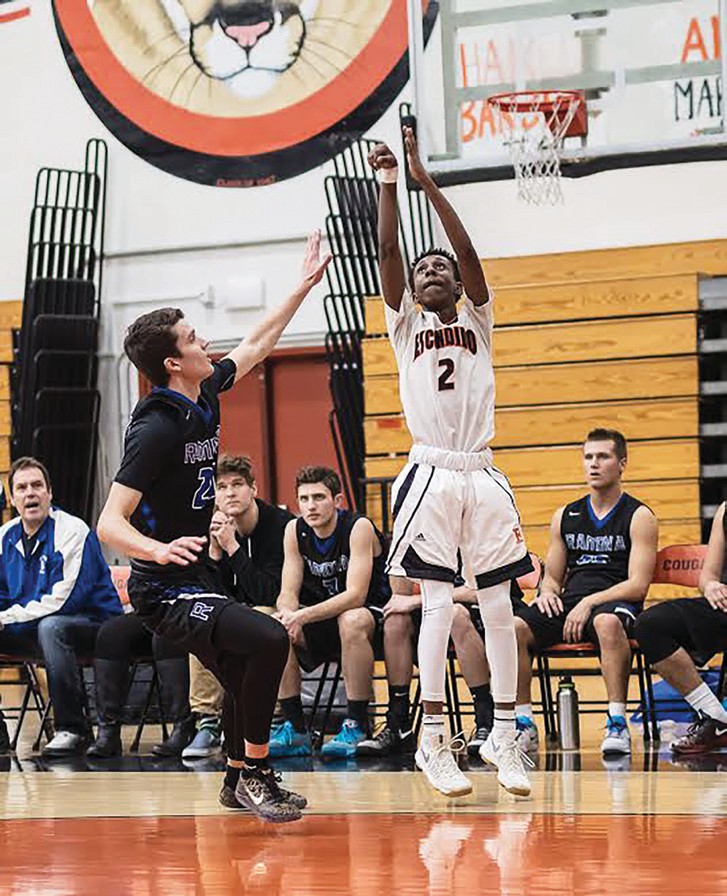 Esco’s Jacob Hutchinson fires away from downtown. The sleek sophomore guard tallied 15 points in Friday’s 68- 59 win over the Bulldogs.

finding the range on only one of his many shots. But trusting that his stroke would come around, he maintained an aggressive mindset and when he drilled a trey from the right forecourt early in the third, the Cougars had their first lead since just minutes into the game. Though no one realized it at the time, Jones had ignited an onslaught. Shortly thereafter as the shot clock was winding down, talented pivot-man Jacob Moskowitz drained another 3-pointer and then followed that up with a free throw.

Next it was swingman Ryan Green’s chance to detonate and he did so with his own bomb from distance. The parade continued on when sleek guard Jacob Hutchison gathered in a sensational outlet pass from Moskowitz and rode it to the hoop for an easy layup.

Then it was the lefty Jones again, arching a corner trey that hit nothing but net, swish city baby! Finally this spectacular run came to an end when Moskowitz, who was a tower of strength on the boards all night long, positioned himself underneath before putting back a nice follow-up shot. Those in attendance were wowed by this remarkable 17-1 stretch that changed the game’s dynamic and completely turned things around. From then on, Ramona was going to be up against it and fighting an uphill battle.

Nothing the Bulldogs tried could stem the tide, not even calling a pair of desperate timeouts that had little effect. Not only was Esco producing points but its aggressive man-to-man defense was unnerving Ramona, forcing the guests into hurried and rushed shots that had little chance of falling. The Cougs held the Bulldogs totally in check, allowing a mere three points in the quarter that culminated with a huge 44-26 Esco advantage.

If this one wasn’t quite in the refrigerator, it was mighty close.

Nonetheless, indicative of its resolve not to quit, Ramona continued to compete hard and when captains Austin Pierce and Blake Seits buried consecutive outside shots, the difference had dwindled to 55-49. For the local fans who were so raucous just a short time before, things began getting somewhat uneasy. But they shouldn’t have feared because it was time for Jones to shine once more. First, the sizzling junior rained down a crucial 3-pointer. And when he quickly tacked on a running layup, order had been restored and Esco was again in front by double digits.

Two late treys from outside the 760 area code by Seits made things a bit more interesting but the die was cast and when the final horn sounded, the Cougars walked off with a very big 68- 59 win.

While on the losing side, it was the 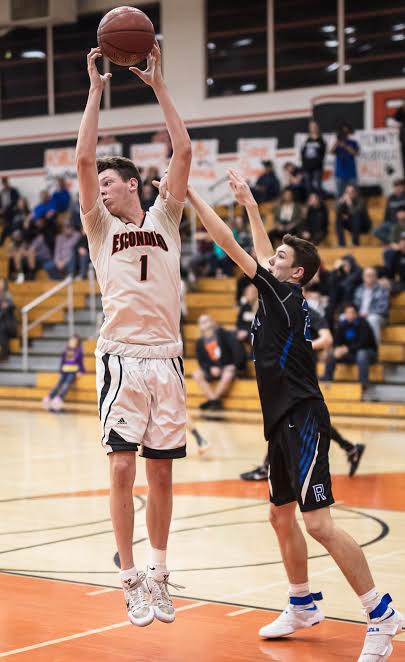 Cougar pivot-man Jacob Moskovitz was a huge factor with both his scoring and tenacious work on the boards.

bombardier Seits who set the pace with 26 hard-earned points – making him the lone Bulldog to reach double figures.

When projecting out from here, you’ve got to like Esco’s prospects going forward because it’s a team that possesses a nice mix. To begin with, the guard tandem of Jones and Hutchinson is an effective and versatile one. Not only can Jones knock them down from distance but he’s a hustler who can pass and get out in transition. Meanwhile, the sophomore Hutchinson who is playing beyond his years, can score on an array of shots, has a deft handle and does a fine job of orchestrating things from the point.

In low, the Cougars have a definite presence in Moskowitz who’s a more than willing banger. This senior really impresses with his determination, particularly when he’s contesting underneath and wrestling away rebounds from the opposition. Imbued with a nice touch, he can not only score from inside but his range extends well beyond the arc. Moskowitz has the potential to put up a double double any time he takes to the court.

Green is another starter who figures to get his share of points because he can either attack inside or step back from distance. And though he was somewhat quiet against the Bulldogs, guard Haikeem Barber has a noticeable fluidity to his game that should allow him to make an impact on both ends of the court.

And when you add to the equation guys like Andy Martinez, Garrin Jackson and newcomer Chris Landry, solid contributors off the bench who know how to fill their roles, the sum of the Esco parts can look pretty darn good. There are plenty of reasons why this team should continue to ascend.

Because of its rather youthful makeup and the daunting path that it encountered early, Baldwin knew that his club would be in for some challenging times but now things are definitely shaping up. “That schedule definitely prepared us for our league,” the coach explains. “We learned how to grind it out, play physical and put in the hard work.”

And so now Esco is reaping the benefits of that experience and seems to be peaking at just the right time. Next stop on the agenda is a Wednesday home date with West Hills and another opportunity to keep the good karma flowing. After taking down a presumptive favorite in Ramona, the Cougars have sent the message that they will be a major factor in the VL. How far they end up going will be determined by their ability to replicate an effort like the one they showed against the Bulldogs. Do that and the sky just might be the limit.

Writer’s Note – All photos contained in this article as well as many other action shots and pictures of the cheerleading squad and crowd, can be found at kerbscustom.com.