Game of the Week 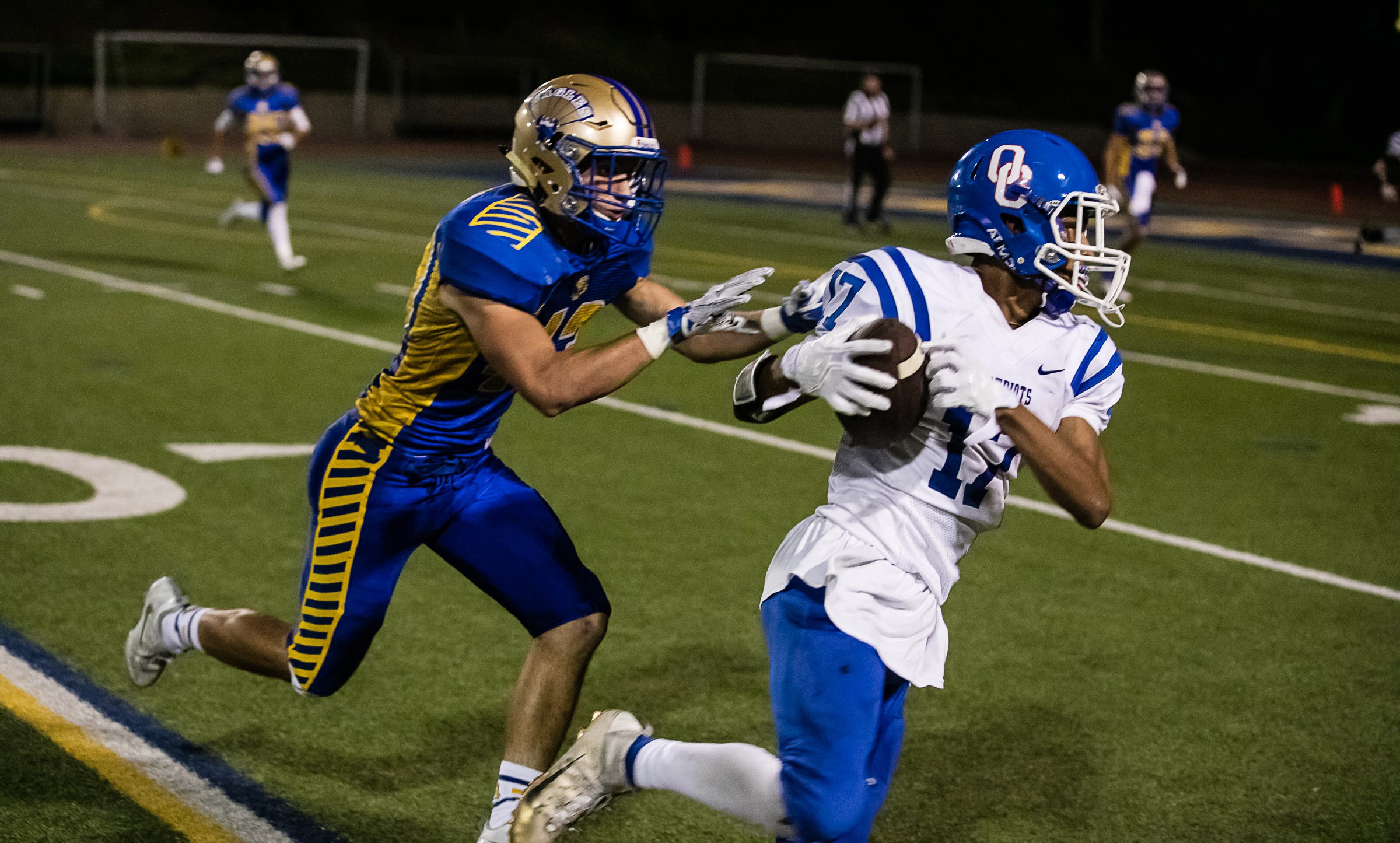 With yet another reception secured, Malachi Russell heads upfield. Photos by Lenny Kerbs

No one could have imagined that the “Battle of Bear Valley Parkway,” waged between Orange Glen and San Pasqual high schools, would turn into an offensive blitzkrieg that would very nearly short circuit the scoreboard.

By the time the game had reached its rather amazing end, 93 points had been rung up and a stunning number of six touchdowns had been tallied from at least 33 yards out.

And although the Patriots did have some moments, the night clearly belonged to the Golden Eagles, who soared to scoring heights they hadn’t reached in some nine years. Ignited by a brilliant performance by quarterback Nick Hurst who ran for three touchdowns and passed for another, SP shook off the disappointment of the previous week’s setback to Ramona and rebounded in a major way to earn an emphatic 62-31 victory over the Pats. That point total matched the second highest in school history, exceeded only the by 77 that the G. Eagles laid on San Marcos in 2005.

This important rivalry win upped SP’s seasonal record to 2-2 while the loss left the Patriots with the very same mark.

The scoring pyrotechnics got going early in the contest when San Pasqual was quick to take advantage of a fumble recovery near the OG goal line. Two plays later, Hurst scored on a keeper from a yard out after a sweet fake hand-off. At this stage, the poor scoreboard had no idea that eventually it would be forced into overdrive and stretched to its very limits.

On their very next possession, the G. Eagles struck again, marching some 84 yards in 11 plays. This drive was strictly a ground operation with Hurst and running back Saud Carrillo doing most of the heavy lifting, with pivotal rushes that kept moving the chains. Finally, it was left again to the clever Hurst to deliver and that he did. Rolling left with an option man behind him just in case, the senior QB made a dandy cut inside, leaving a defender flat-footed. Now with open space before him, Hurst simply hustled into the end zone from 8 yards out. With 2:08 remaining in the first quarter, San Pasqual had broken on top, 14-0.

A 25-yard Jose Meza field goal got the Patriots on the board and narrowed the lead somewhat. But by this time, Hurst was wheeling and dealing. 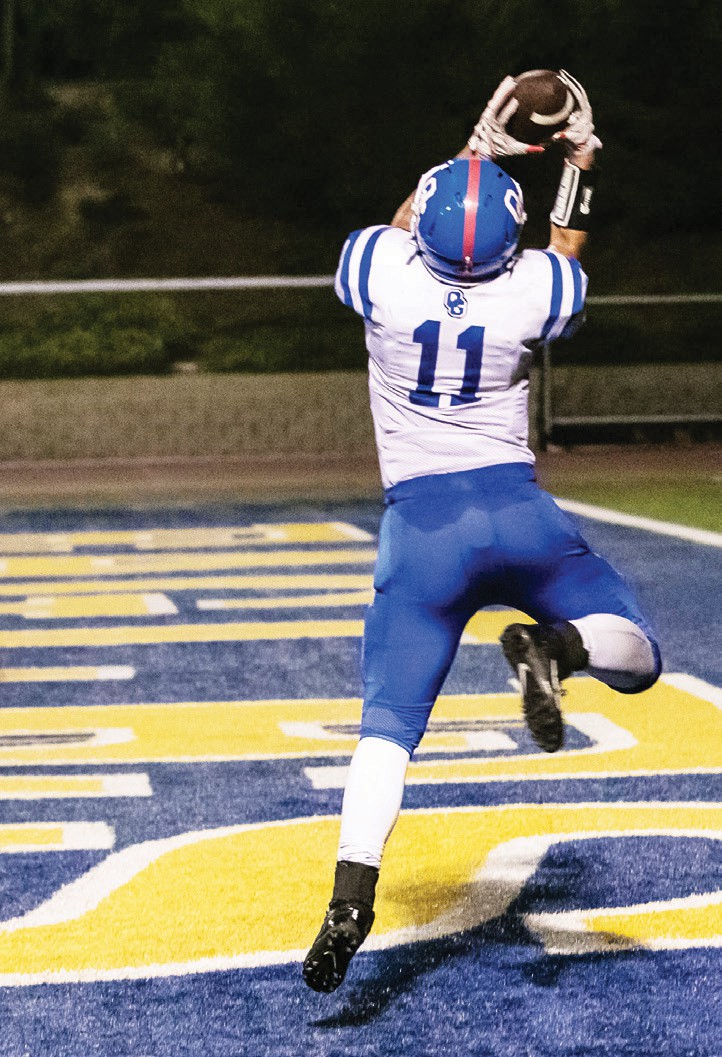 With the Pats defense understandably run conscious, the G. Eagle signal caller next carried out an exquisite play-action fake that froze the opposition. Slipping behind the Pats’ secondary, back Samuel Serrato was all by his lonesome and Hurst dropped in a beautifully placed aerial, the result of which was a 33-yard touchdown toss.

Shortly thereafter, Thomas DelMastro, SP’s gifted cover cornerback, came up with a remarkable interception in which he literally wrested the ball away from the intended receiver.

Though he was now backed up deep in his own territory, the resourceful Hurst was hardly deterred. And on the very next play from scrimmage, he enthralled the SP home fans with more of his magic. After another sublime fake to the belly man, Hurst kept the rock, rolled right and found a gash in the OG defensive front. Sprinting through it instantaneously, he cleared the point of attack and just like that he was gone, with no one in front of him and no one capable of catching him. Eight-nine yards later, he had found paydirt yet again. Hurst had seemingly reached an idyllic state where he literally could do no wrong. A Jacob Toledo PAT upped the count to 28-3 with 8:17 still remaining in the first half.

But just when it seemed all hope was slipping away from the Patriots, the electrifying Malachi Russell provided a desperately needed spark. Gathering in the ensuing kickoff at the 5, the speedy junior readily found a crease, made a nice jump move to the right and once he neared the sideline, he accelerated as his afterburners kicked in. There was absolutely no way any SP defender was going to come close to tracking him down. When Russell made it to the goal line, he had traversed a whopping 95 yards.

If only for a few fleeting minutes, the Patriot bench was revived with the belief of a possible comeback in the immediate aftermath of Russell’s heroics. However, that euphoria was to be rather short-lived.

When an OG onside attempt failed, the Golden Eagles were presented with great field position and they gladly made the most of it. Three plays later, lightning was to strike when Serrato took a delayed hand-off, was the beneficiary of a huge hole carved out by the offensive line and simply kept on truckin’ for a 45-yard scoring jaunt. Serrato’s TD 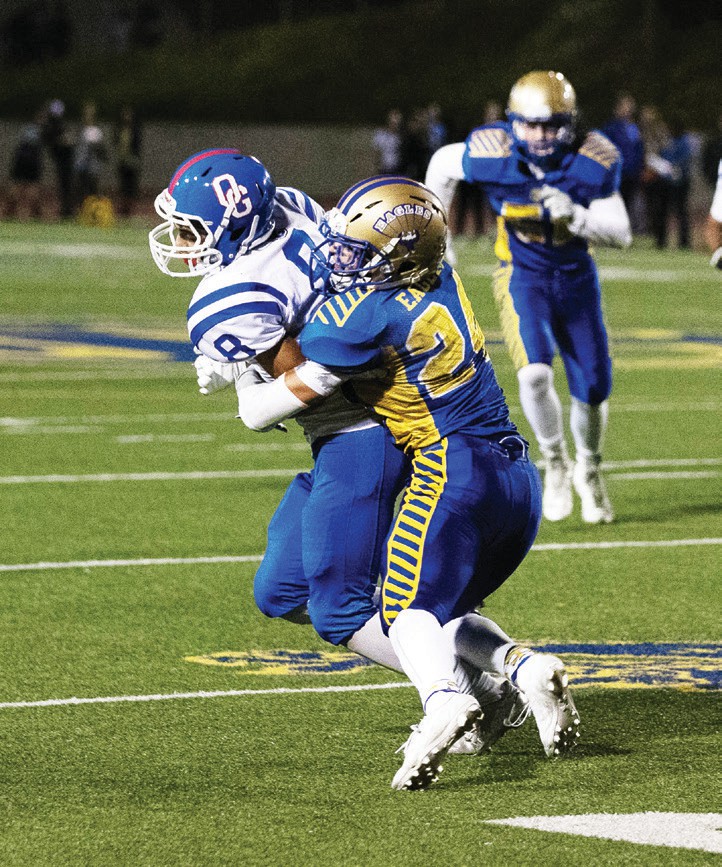 dash not only extended the SP lead to 34-10 but it also meant that a stunning four touchdowns had been scored in the previous 3:46 seconds.

And yet, much to their credit, the Pats weren’t ready to go away and back they came on an answering 12-play, 73-yard excursion. This drive was highlighted by a pair of Blaine Bailey to Billy Mercado hookups, the last of which was a 20-connection that came on a crucial fourth down. Running back Tyrone Hickson finished things off when he did a nice job of picking his way into the end zone from 3 yards out.

If the score had remained there, at 34-16, OG might have had some momentum going into the locker room at the half but alas, there was no let up in the G. Eagles and they were about to, for all intents and purposes, deliver the knockout blow. The hosts would need only four plays to create even more separation from the Pats, who all night long were faced with the daunting task of climbing uphill. For the third time, Serrato would produce a dramatic play, taking a Hurst pitch, getting to the perimeter and then motoring down the right sideline until he hit gold, this time from a distance of 53 yards. When Toledo tacked on the PAT, the score read 41-16 at the break.

Though 36 more points were to be scored in the second half, they seemed rather anticlimactic because the game’s outcome had basically been decided. A 12-yard fumble recovery return by Jaden Pabloff added to SP’s margin. Then, Carrillo scooted through a big gap from 35 yards out to help make it 55-16. The G. Eagles’ final score came courtesy of a nice 10-yard keeper by backup QB Ryan Donoghue.

For the Patriots, it was the dependable Billy Mercado who scored both OG touchdowns in the second half. The first came as on a 2-yard flip from quarterback Blaine Bailey in which Mercado stretched to haul it in. The second saw the senior receiver get open in the left flat and then maneuver his way into the end zone with a 14- yard catch and run. Much to the scoreboard’s relief, Mercado’s latter tally, aside from a Meza PAT, mercifully brought the scoring to an end.

Though the G. Eagles had plenty of invaluable contributors, the star of 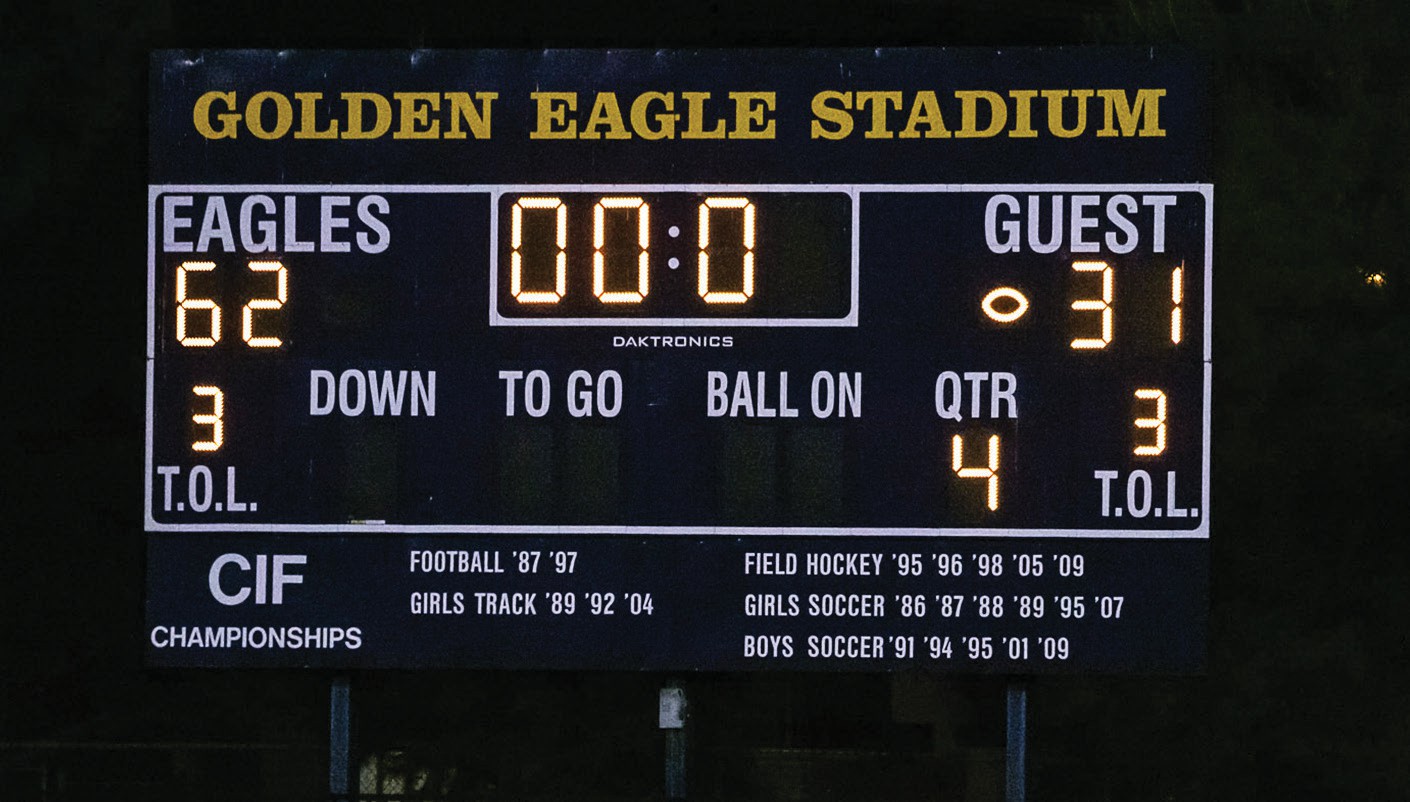 The overworked scoreboard tells it all.

this production was clearly Hurst. Nimble and elusive with his running, the Pats were constantly chasing him throughout the evening. Not only that but Nick’s decision making and deft ball-handling and faking was truly off the charts. Hurst orchestrated and ran the offense like a virtual maestro.

The versatile Serrato was also a major factor with his trio of impactful touchdowns. And not to be outdone, the offensive line’s influence was massive as it created sizeable holes and conspicuously controlled things along the trenches.

And SP wasn’t without its defensive standouts. Tackle “Cole” Hardan got in on a couple of timely sacks and wreaked his share of havoc down low. Acclaimed linebacker Jake Salaheddine justified his reputation with a passel of tackles and lots of hard hitting. And then there was DelMastro, whose ability to close on receivers and play the ball was highly impressive.

San Pasqual played with a notable crispness and precision, executing at a very high level. If the G. Eagles can come close to duplicating what they brought to the table on Friday night, their prospects moving forward are promising to say the least.

For the Patriots, there were some legitimate positives. To begin with, they never threw in the towel and continued to compete right to the very end, which speaks not only to their resolve but also to the commitment their coaches have instilled in them.

Russell had another productive night with a number of catches and again reinforced the notion that he is one dangerous hombre whenever he gets his hands on the pigskin. Mercado continued to prove he is a clutch receiver with great hands and a propensity for getting free at opportune times. Brandon Montes and Zeandre Anderson made some nice grabs and showed themselves to be viable options in the offense. And Bailey, though somewhat banged up, made lots of accurate throws in what must be considered a gutsy effort.

Nonetheless, it was Golden Eagles’ night to shine. And with the win, SP retained possession of the coveted Bear Trophy that goes to the victor of this intense neighborhood rivalry.

So, as the proceedings came to a conclusion, the G. Eagles had soared to a rarified place and in doing so, had taxed the scoreboard to the max. For those reasons and a host of others, without a doubt, this will be a game long remembered in the annals of SP football.