G. Eagles prove themselves winners despite semifinal loss to SFC 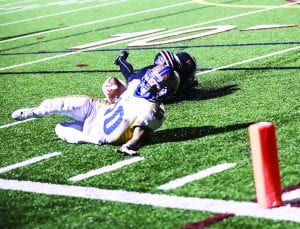 San Pasqual quarterback Westin Erdman eyes the distance between him and what would have been a key two-point conversion run. Photos by Lenny Kerbs

Thanks to the narrow win, SFC (8-4) moves onto the championship round where it will meet top-seeded and undefeated El Centro Southwest (12-0) this coming Saturday afternoon at Chula Vista’s Southwestern College. Alas, for the 7-5 Golden Eagles, there are no more games to play. Their admirable and gritty season now belongs to the history books.

But don’t let that final result of the SFC/SP contest fool you. Sometimes a scoreboard can be as misleading as politicians and simply isn’t capable of telling a comprehensive story. Often it provides only a snapshot that paints an incomplete and distorted picture.

Because in so many ways, the Golden Eagles were the furthest thing from being losers this past Friday evening. In fact, they won on so many fronts – such as the manner in which they competed like passionate warriors dedicated to an exalted cause and the way they took over and controlled the second half, clearly proving themselves to be the better team for the game’s final 24 minutes.

And the truth be told, it’s very likely that a controversial penalty call made by a side judge far removed from the action precluded San Pasqual from completing what would have been a magnificent comeback.

On their first possession of the final quarter, riding a wave of both momentum and emotion, the G. Eagles watched as their resourceful quarterback Westin Erdman executed a deft fake before he broke to the outside and sped down the sideline for a huge gain that would have placed SP deep inside the red zone and primed to produce a go-ahead score. But a questionable flag was thrown, much to the consternation and bewilderment of the SP sideline and a terrific run was wiped out. Two plays later after Erdman’s heroics had been negated, the G. Eagles were forced to punt. 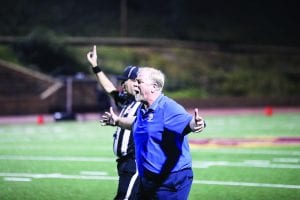 As shown here, SP head coach Tony Corley wasn’t always satisfied with the officiating, particularly on a call that wiped out a lengthy run by Wes Erdman.

To say that this turn of events wasn’t game-changing and didn’t affect the ultimate outcome would be like claiming that Waterloo played no part in the demise of Napoleon. It never goes down easy when a zebra holds such sway over a game of this magnitude.

And what made it even more difficult to accept was the manner in which the G. Eagles had gamely battled back to get themselves in a position to overtake their opposition.

After a scoreless first quarter, the SFC Eagles (apparently not of any specific species unlike the Golden Eagles), were to build up a comfortable 14-0 margin before intermission. It was bullish 230-pound running back Luke Sanders who got things started when he powered his way up the middle from seven yards out to get SFC on the board.

And then with just 2:25 remaining in the first half, these coastal Eagles were to strike again in dramatic fashion. After freezing the defense with a nice play-action fake, SFC QB Michael Linguadoca dropped back and fired a tight spiral toward receiver Matthew Stevenson who had cleared the entire SP secondary. With literally no one around to impede him, Stevenson neatly hauled in the toss before he was off to the races. Sixty-seven yards later he was crossing the goal line for a tack-on score that certainly enhanced the confidence that SFC and its fans were feeling at the break.

However, the tenor of the game began to seismically change sides early in the third quarter when SP defenders Ben Lee and Luis Jimenez combined for a key stop on Linguadoca that forced a punt.

Now it was time for the G. Eagles offense to do its part and man, did it ever respond! Faced with a third-and-long situation from deep in his own territory, Erdman nimbly rolled to his left and let fly with a bomb while on the move. Down along the left sideline near midfield, the pass began its gradual descent. In what seemed like a flash, SFC defensive back Will Littlejohn made a valiant attempt to bat it away but when he missed, SP wideout Conor Davis, the very personification of concentration, was right there to snare it. After his remarkable grab, Davis began to hightail it and soon he was gone, never to be challenged as he made his way toward the end zone. This stunning 86-yard connection had completely altered the game’s dynamic but a tinge of its luster was lost when the G. Eagles weren’t able to convert on the subsequent PAT. This missed kick would prove to be costly. 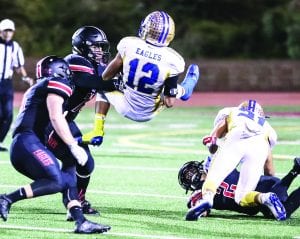 Golden Eagles running back Shawn Carter is sent skyward after being tripped up by SFC’s Chase Bapista (#2).

But SP’s defense continued to dig in and produce. Big-time stops by linebacker Johnny Vega and lineman Luke Dubois were instrumental in again getting SFC to relinquish possession of the rock.

And for the second straight series, the offense of Coach Tony Corley would deliver. After a short punt gifted the G. Eagles with sweet field position at the 50-yard line, they were quick to take full advantage. It would require Erdman and crew just four plays to hit paydirt. The signature carry of this drive, which featured all runs, occurred when the slick Erdman faked, jumped outside and then made a superb cut back across the grain – the end result being a brilliant 37-yard tote. It was then left for running back Shawn Carter to accept a pitch and cut to his right before a nice spin move produced a 4-yard touchdown tally that drew the G. Eagles ever closer at 14-12. But once more, their conversion try failed, this time when SFC’s Chase Baptista made a knifing tackle of Erdman at the 3-yard line after the SP signal-caller couldn’t find an open receiver.

Nonetheless, the G. Eagle defenders remained undeterred and refused to crack. A fumble recovery by Dubois repulsed one SFC drive while a diving knockdown by Jackson Stetson of a fourth-down pass blunted another Eagle possession.

That then set the stage for the aforementioned notable dash by Erdman that was called back by the dubious hankie which played a pivotal role in killing that series.

And yet, SP refused to quit and doggedly soldiered on. A host of G. Eagle tacklers converged in mass and stoned Linguadoca on a 4th-and-1 attempt. Then, after Erdman was sacked twice on SP’s penultimate possession, the defense again rose up to force another punt.

But with no time outs left, little time remaining and situated very deep in its own end, SP had no answers for this almost impossible predicament. Soon after, the clock expired and a gallant effort had finally run its course. 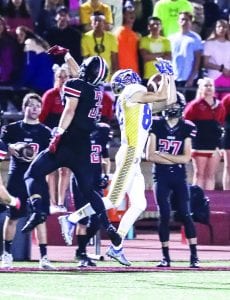 After making this sparkling over-the shoulder catch, SP wideout Conor Davis was never headed on his way to an 86-yard touchdown.

To be certain, SP’s offensive unit had made its presence felt with a strong and exciting second-half showing but it was the defense that was the igniter of the G. Eagles comeback. Standouts were to be found all over the field such as Vega, Dubois, ubiquitous linebacker Carson Cruz, Juan Juache, lineman Trevor Rawdon and Tim Hansen. These players helped form a wall that RSF couldn’t penetrate after halftime and it was through their determined efforts that SP was in a position to mount its rally from behind. They did themselves proud over the game’s last two quarters with a shutdown performance that won’t soon be forgotten by those who were fortunate enough to witness it.

Which begs the question, can you really be winners when you come out on the short end of a 14-12 score? Damn straight you can if your effort is inspiring, if you exemplify a never-give-up mentality and if your players compete with an intensity that wasn’t to be snuffed out.

And because the Golden Eagles qualify on every one of those counts as well as many others, they’re deservedly entitled to any plaudits directed their way – truly they were winners all, even in the face of defeat!