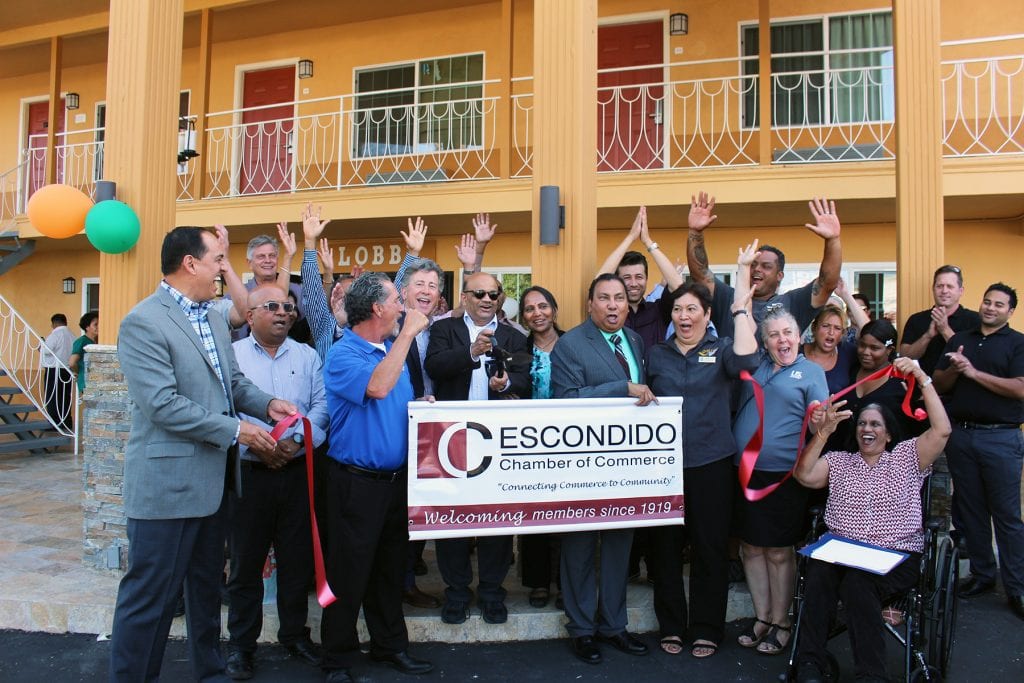 A hotel that was once an eyesore along one of Escondido’s most well-traveled thoroughfares has been transformed into one of the nicer places in town to spend the night. Not to mention that the change gives a much better look to the downtown area.

Monday afternoon the staff of Quality Inn Escondido Downtown was joined by the owners, representatives of the Choice hotel chain, and a welcoming committee from the Escondido Chamber of Commerce to celebrate a ribbon-cutting and “grand re-opening.”

Eventually, the owners of the Inn plan a $25-$30 million project on the remaining land, which abuts on Centre City Parkway (see below.)

The Quality Inn, formerly Mount Vernon Inn (you can see part of that old sign poking around from under the temporary fabric sign that has replaced it) is a place where you can stay at a very comfortable room with Serta mattresses, what one patron described as “blazing fast Wi-Fi” and then dine on a breakfast of fresh cooked waffles, scrambled eggs, bacon, pastries, juice and coffee.

Ralph Felsinger, the hotel general manager, and his staff spared no effort in making the place welcoming for the guests. In addition to sandwiches and tacos catered by Kennedy’s Market Escondido, there were also special homemade samosas, an Indian delicacy.

Felsinger told a couple of dozen people, “We are glad you had time to come down and share with us this moment.” He thanked contractors such as Jose Morales, who did walls and tiles and the reception area, and United Plumbing and Heating, “which did a bang up job,” among others.

Felsinger noted that the hotel was formerly Mount Vernon Inn. He welcomed two current residents of the hotel, who used to stay at Mount Vernon, to say a few words. One said, “When I first moved in, I noticed there was a lot of problems. Stuff was being renovated. Rooms were a little out to date. Slow internet.”

But when he returned last September, “I noticed a huge upgrade, large TVS, new beds, high speed internet—blazing fast. Just being able to notice such a change is so amazing. Then the new crew came in. The staff is amazing!” he said. “I can’t believe that something that was that old, being upgraded to this Choice Quality Inn, is amazing. Thank you for giving me the opportunity to stay here this long.”

J.R. Rowten, chief executive officer of the Escondido Chamber of Commerce, turned to Felsinger, “Thanks for having us. We are proud to be part of Quality Inn.” He praised the turnout. “This is a great showing for this grand reopening on a Monday afternoon.” He thanked  Chris Cochran, the Chamber’s marketing & development director and two directors, Joe Coyle and Jim Vander Spek.

Also on hand was Aaron Andrews with a proclamation from State Senator Brian Jones’s office, and  Christie McDougal of Assemblywoman Marie Waldron’s office. “Thank you for making our community a nicer place to live,” she said.

Nilesh Patel, one of the owners of the property, thanked Felsinger, who was brought in six months ago by the Choice hotel chain. “I told him this is my goal and he made it happen,” he said. He also thanked the former owners of Mount Vernon Inn, “Mike and Andy.” Patel said that when he offered to buy the place they said, “This is a challenge.” “I will take that challenge. I may lose some hair!”

Two years ago Patel and his team first met with the city. “I talked to the mayor, the city council, the city manager. We have a lot of hotels. I told him “Give us time and we will make it a better place to do business.” He said that a brand new sign will go up soon. He added, “We picked a lot of good partners to make this dream come true.”

Patel added that he and his partners are going to the city with six different concepts. Including a new shopping center, a residential high-rise with 110 units “or maybe another hotel and a drive through restaurant.   We are working with the city to make that happen.” They contemplate spending between $25 million and $30 million, he said.

The final comment before the ribbon cutting was from Gabe Borquez with the Choice hotel chain, who said, “We have developed a great friendship with the owners. When we saw that a Quality Inn franchise was available for this location, we were very happy.” 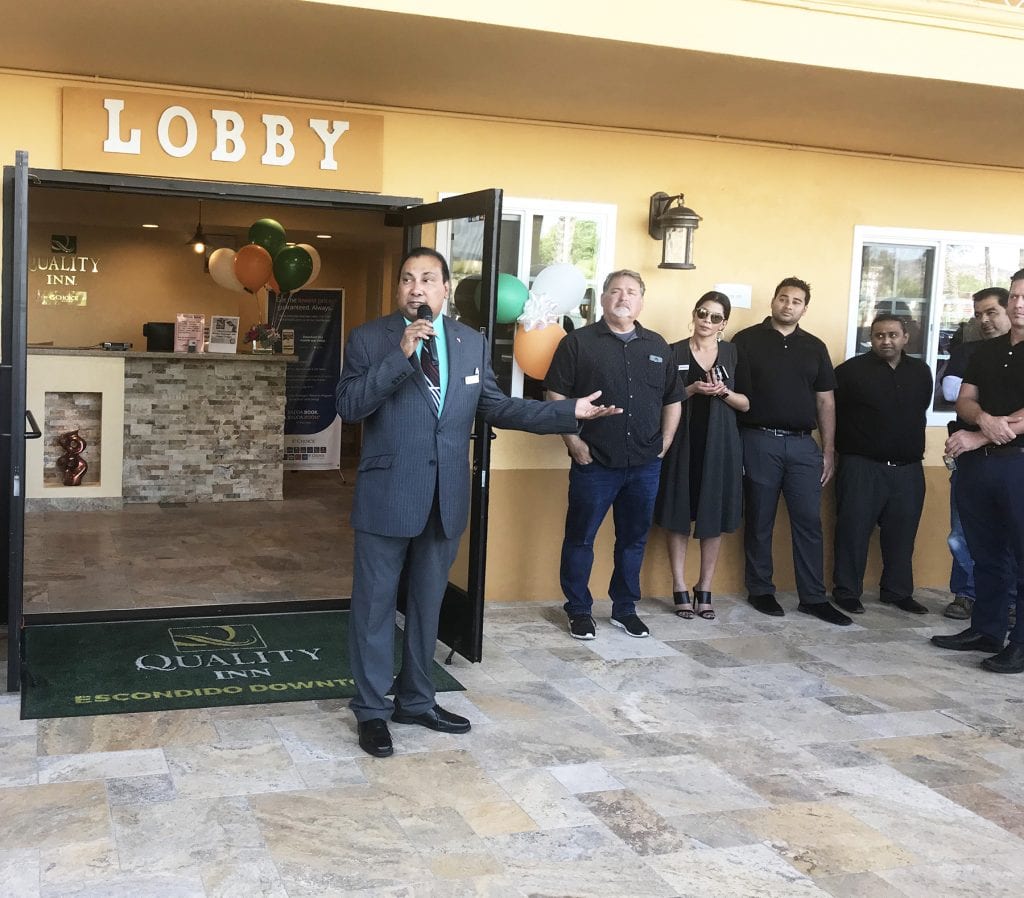