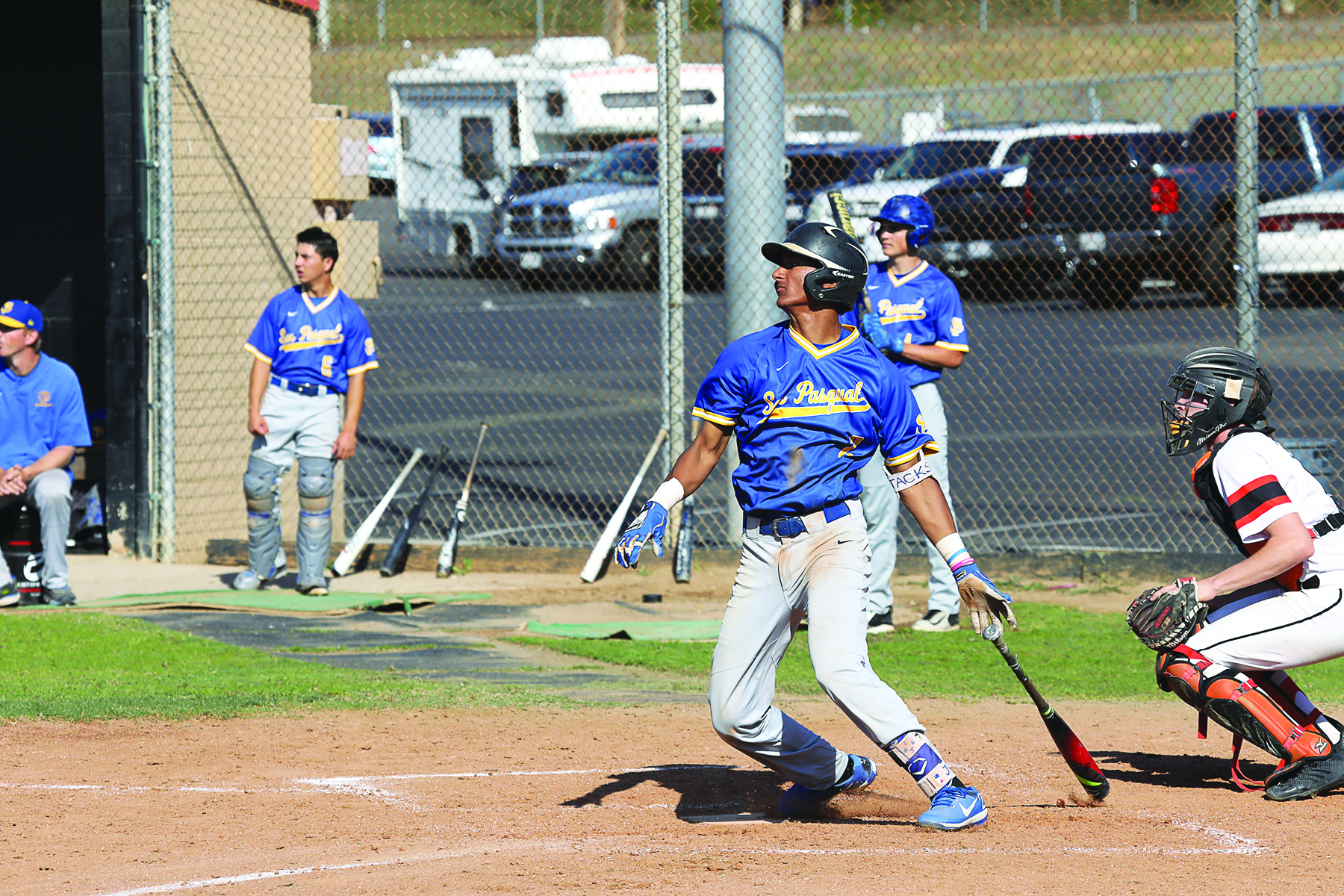 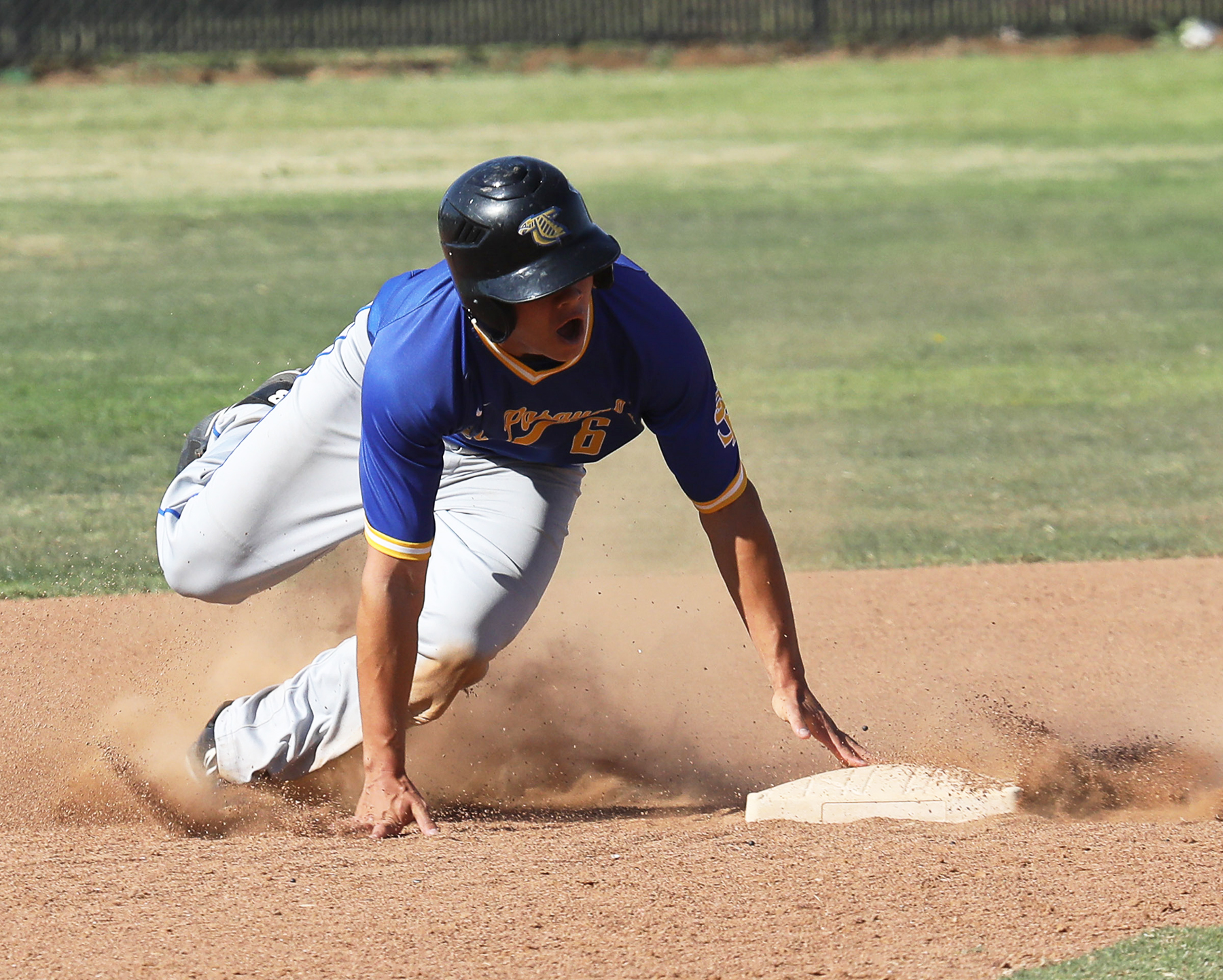 SP standouts Elijah Jackson (top) and Connor Oca, shown here in a game against Escondido, delivered RBI doubles in a 5-2 loss to Fallbrook.

In baseball, generosity is rarely a good thing.
And in Tuesday’s CIF Division IV playoff game between Fallbrook and host San Pasqual, it proved to be fatal for the Golden Eagles during an eventual 5-2 loss.
Fully capitalizing on two walks, a brace of hit batsmen and a crucial error, the Warriors (17-15) scored four runs in the final two innings to come from behind and secure a win that kept their season alive.
Meanwhile, the G. Eagles (20-11) saw their impressive nine-game roll come to end, tasting defeat for the first time since way back on April 21 – which ironically was a 3-0 setback to this same Fallbrook squad.
By virtue of their fourth-round playoff triumph which extended their modest winning streak to three games, the seventh-seeded Warriors forced a decisive rematch with San Pasqual (No. 3 seed) on May 30th, with the victor advancing to Saturday’s championship final at UCSD against Castle Park.
Hardly strangers, given the fact that both teams compete in the Valley League, the aforementioned contest will mark the fifth time this season that Fallbrook and SP have met on the diamond. With each squad having won twice, the tiebreaker will prove to be the most important of all given its dramatic implications.
The G. Eagles had advanced to the fourth round as a result of a bye and two emphatic wins over San Dieguito and Foothills Christian (No. 2 seed). As for the Warriors, they made it that far by negating a loss with three of their own wins in the double elimination format.
As far as Tuesday’s encounter was concerned, San Pasqual seemed well positioned for the win with a 2-1 lead – being just six outs away from extinguishing the Warriors and earning a berth into the title round. Up to that point, right-hander Andrew Walsh had been efficient and steady, keeping his fastball low and changing speeds while yielding just four hits while striking out a pair. The lone Fallbrook run had come in the first frame, courtesy of an RBI single that was whacked into left-center field off the bat of Tristen Smith.
But when Walsh hit the leadoff batter in the sixth and then issued a walk, SP coach Jake Blalock opted to come get his senior hurler and replace him with southpaw Jansen Lublin. Unfortunately, Lublin couldn’t immediately locate the strike zone and he too allowed a base on balls, thereby loading the bases with nobody out. Soon after, Lublin began to settle in but not before allowing a hard line-out to right by Blake Caron that produced the game-tying run.
And at 2-2, that’s the way things stood entering what would be the final frame. Again a hit batter, in this case Collin Hoff, started things off on an ominous note for the G. Eagles. This marked the fourth time that Hoff had been aboard, the talented centerfielder having previously singled twice and walked.
Next up was shortstop Dean Olivo and he dropped down a deft and exquisitely placed bunt. Lublin hurriedly got off the mound but in his haste to field it, he slipped and attempting to make a throw while on his side, the lefty’s errant toss went well wide and skipped deep down into foul territory. By the time the dust had settled, Hoff had come all the way home and Olivo was standing at third as a result of the costly throwing error.
And the Warriors took full advantage of that mistake when Smith, already having driven in a run, spanked a shot over first base that rolled all the down the line and resulted in a triple that increased the count to 4-2. Moments later, cleanup hitter Josue Navarro drilled a deep sacrifice fly to center that brought in the final run of the contest.
That was more than enough for the left-hander Caron, who though hardly overpowering, did a fine job of pitching to contact and retired the last seven batters he faced while fashioning a complete game six-hitter.
It was no surprise that the two hitters who troubled Caron the most were SP’s most accomplished batsmen. Junior Connor Oca, an agile catcher with a shotgun arm, had a perfect afternoon with a pair of hits and a walk. Forever making solid contact, Oca’s crushed double off the left-field fence chased home the first G. Eagle run.
The other SP tally was the byproduct of another RBI double, this one authored by shortstop Elijah Jackson. A superb athlete who possesses an undeniable clutch gene, it was Jackson’s smash down the line in left that staked his club to its one and only lead of the afternoon.
And for a brief while, it looked as though the G. Eagles might be able to make Jackson’s hit stand up as the difference. But then came the damaging generosity and freebies which allowed Fallbrook to score four times while needing just a solitary hit to do so.
As the G. Eagles painfully learned on Tuesday, being generous in baseball will almost always result in your undoing.