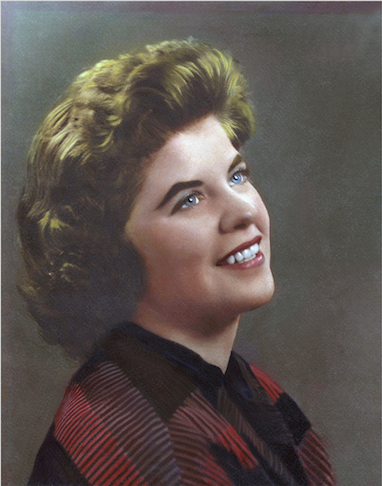 The day Freda Faith Sullivan (Faye) was born, February 25, 1939, it was cold enough to snow in the small North Carolina town known colloquially as “Valley of the Lilies.” Cold, wintery days brought her joyful memories of every Christmastime spent in the warm embrace of family. It is a blessing that the last holiday season she’ll take into eternity was filled with the happiness, love, and laughter of her family. Mrs. Sullivan passed away peacefully in her sleep on February 11, 2020, in Provo, Utah. She was 80. Her family created a memorial to celebrate her life: gatheringus.com/memorial/faith-sullivan/2488

Mrs. Sullivan loved the outdoors, and growing up she enjoyed family camping trips. She also had a life-long love of reading and a vivid imagination. “I’m never bored,” she would say. “I have my mind to entertain me.” She fantasized about being Roy Rogers, King of the Cowboys, and she pretended to be a doctor, delivering the babies of garden snakes, which she said drew her into the medical profession.

She joined the high school pep squad to cheer on the basketball and football teams. After high school, she joined the Navy intent on marrying an admiral. She was practicing to become a nurse when she met her future husband recovering from an illness. He waited several days after meeting her before proposing.

They were married on June 7, 1958, in a quiet ceremony at Rocky Mount, North Carolina. She would go on to raise seven children with everything in her, because they were everything to her.

Her unshakable conviction that all people were children of God inspired her to boundless generosity. Her caring nature brought greater purpose and commitment to her work as a nurse.

She was an outspoken advocate for the causes that meant so much to her, especially for the protection of precious children.

Her life was filled with various creative endeavors, from cooking, decorating, and floral arranging to painting, filmmaking, and theater, some of these becoming entrepreneurial ventures.

She was fun loving and laughed easily, even at her own foibles. She embodied a rare combination of fierce independence and a steadfast devotion to those she loved. She was a tireless protector, a constant champion, a faithful friend.

She didn’t know her middle name was Faith until she was 16. From then on, that’s what she wanted to be called. Those who knew her best will tell you she lived up to her name. She was a woman of simple faith. She loved God and believed in the teachings of Jesus Christ.