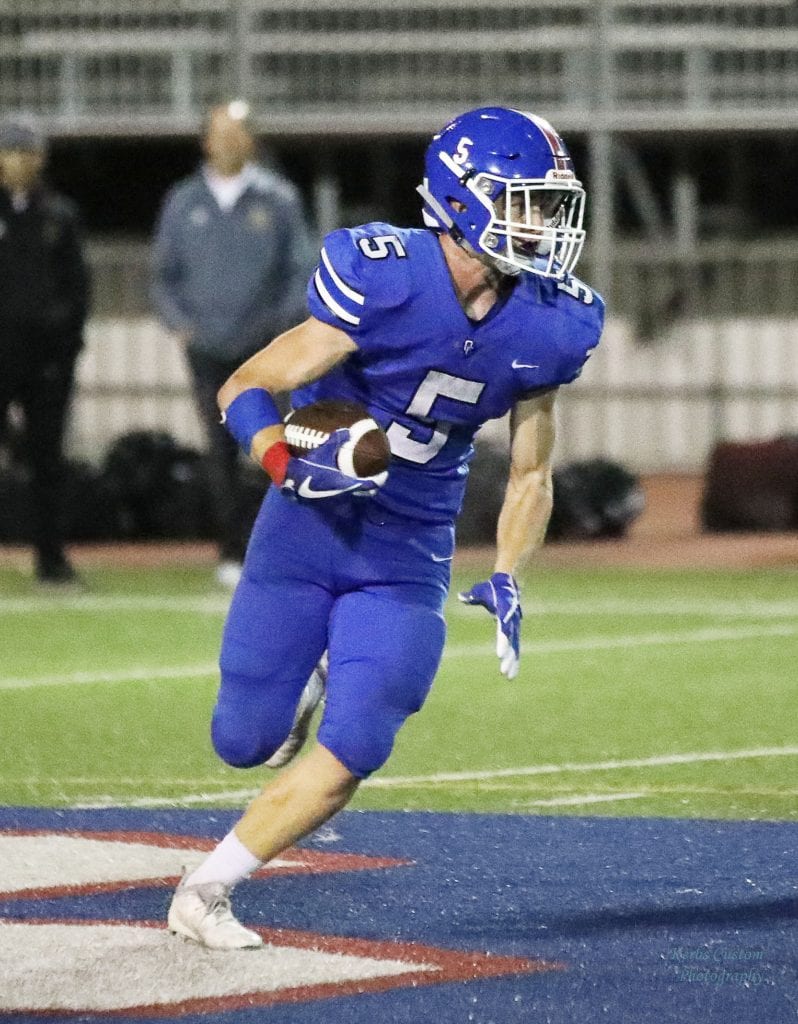 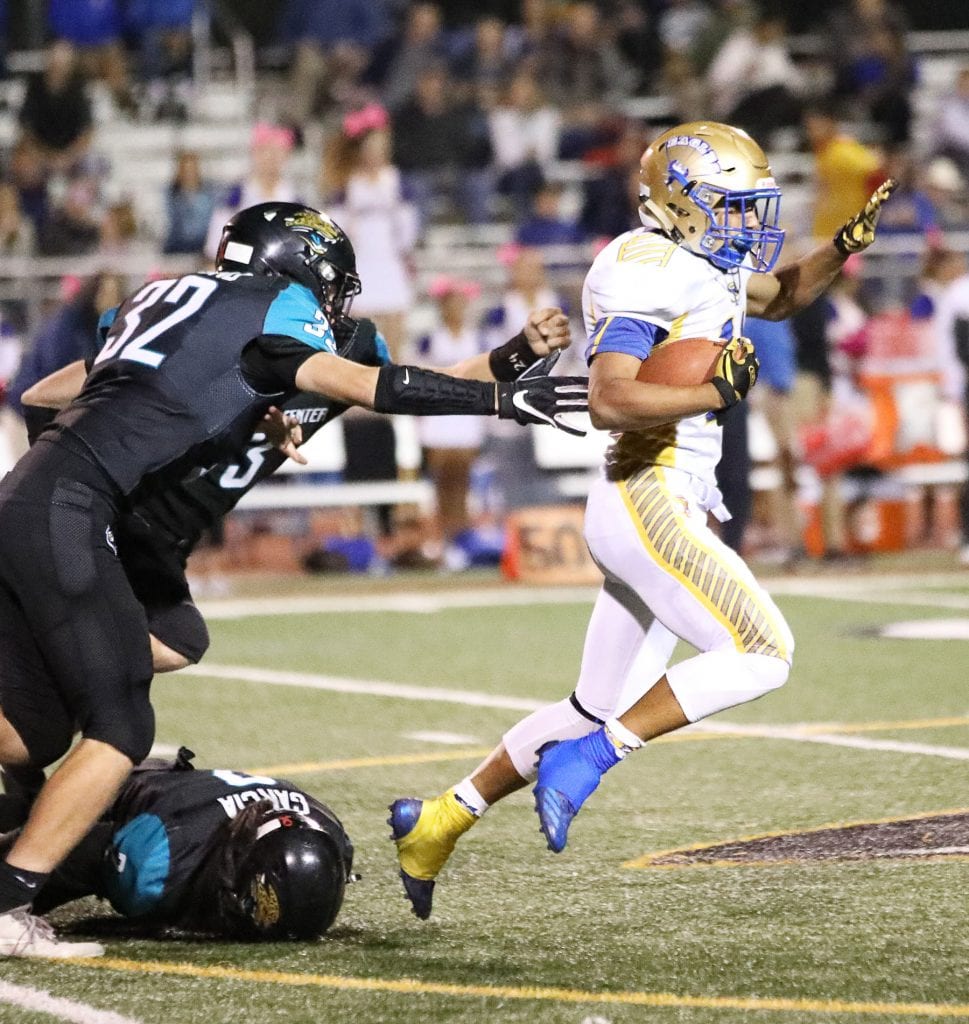 Hard as it might be to believe, prep football’s regular season has come to an end. In some respects, it seems as if it was just yesterday when the local high school squads where lining up for their opening games in mid-August.

Indeed, things appear to have gone by in a blur. But now is the time when matters take on much more significance with the beginning of what is called the second season – better known as   postseason or playoffs. This is when the stakes are highest, when the pressure is ratcheted up and where life-long glory can be realized if a team can get hot and go on a timely run.

Four Escondido-based teams qualified for the playoffs and are looking to make some real noise in the upcoming weeks. In somewhat of a quirky stat, Calvin Christian, Classical Academy, Orange Glen and San Pasqual all finished with the exact same win total of six during the just concluded regular campaign. Each of those squads is hopeful of adding to that number as they prepare to compete in a setting where survive and advance becomes the order of the day.

So let’s take a look at the four local teams that, as of now, have their playoff dreams still very much intact.

Calvin Christian – Over past few years, the Crusaders (6-4, 4-1) have been a dominant team so they’re unaccustomed to absorbing that number of regular-season losses but nonetheless they finished second in the Ocean (8-Man) League standings.

Seeded No. 2 in the postseason, CC offers a dangerous one-two punch on the ground with talented backs Evan Senti and Paco Corona leading the way. Though the Crusaders place a heavy priority on toting the rock, quarterback Greg Pilgrim and receiver Noah Brouwer merit watching since they’re capable of doing damage through the air if required.

Defensively, CC counts heavily on a foursome that has individually racked up some impressive tackle totals and features Senti at linebacker, Pilgrim in the trenches as well as Corona along with Brouwer on the back end.

CC’s opponent this Thursday will be the San Diego Jewish Academy, a team that the Crusaders outlasted by a count of 16-10 earlier in the year. In that contest, Senti (132 yards rushing, 10 solo tackles, 3 sacks) and Corona (99 yards rushing, 7 tackles, 1 INT) were absolute beasts on both sides of the ball.

The fact that the game will be played at CC bodes well for the hosts since the Crusaders have lost only once on their home turf. Should coach Randy Kreglow’s crew manage to down the Lions for a second time, it would once again find itself in the championship tilt for the third time in four seasons.

Classical – Though the Caimans have enjoyed a solid year (6-4, 1-3), their 34-27 victory over La Jolla Country Day last week was very much welcomed since Jon Goodman’s club had dropped three of its previous four.

Putting points (301) on the board hasn’t been a problem for a Caimans’ offense that presents bona fide playmakers in shifty running back Damian Castaneda and the versatile Diego Preciado. Plus, underrated quarterback James Duncan has shown that he can rise to the occasion when called upon to do so.

The defense has demonstrated it has the capability of being stout. Linebacker Nate McCarthy is one tough and active customer while Caleb Goodman and Calvin Vanderleest are legitimate sack artists. Moreover, Joseph Knight and DB Preciado are two other defenders who have proven they can make an impact.

Playing in Division IV, the seventh-seeded Caimans will host Calexico (3-6) this coming Friday night in a first-round game that most expect them to win. Should they do so, a date with highly- regarded Kearny will be their reward.

Orange Glen – Player’s coach Jason Patterson has done a splendid job of orchestrating a notable turnaround for the Patriots (6-3, 1-2) who won five more games this season than the year before. As a result, the Pats earned a No. 1 seed in the Division V playoffs and will have a bye this coming week. OG is scheduled to return to action on November 9, entertaining the winner of the Castle Park-Maranatha Christian matchup.

And as long as the Pats have the gifted and prolific ballcarrier Cael Patterson doing the heavy lifting, their chances in any contest must be rated promising. Patterson was an absolute showstopper during the regular season, finishing with a whooping 1,574 yards on the ground and placing second in the San Diego Section in that category. Patterson is a wonder in that he never seems to wear down while offering an enviable combination of slick moves, determination and a knack for getting to the perimeter.

Though Patterson is undeniably the driving force behind the offense, the Pats have a viable run-throw option in developing quarterback Ethan Villalobos while smooth receiver Christian Gonzalez-Torres can definitely stretch a defense.

Meanwhile, the Pats’ “D” is chock-full of big-time contributors. Five OG defenders have registered at least 43 tackles with headliners to be found at all three levels – Carlos Galan in the pits, ubiquitous Julien Lesa at linebacker and super sophomore Dylan Ewing in the secondary.

Given their seeding and legitimate talent, don’t be at all surprised if the Pats make a concerted push in the playoffs.

San Pasqual – The Golden Eagles (6-4, 3-2) finished the regular season with a flourish, besting Fallbrook 42-10 before ending the regular-season campaign with a convincing 35-0 triumph over nearby neighbor and Valley League rival Escondido.

Seeded 10th in the rugged Division II playoffs, SP will have a stern test this week when it travels to No. 7 seed Mira Mesa (7-2). Interestingly, the road hasn’t been very kind to the G. Eagles thus far in 2018 with all four of their losses coming away from home.

But that trend could very well change because a Tony Corley coached squad can be a tough one in the playoffs. Known for their physical play and execution in the running game, if the G. Eagles are right, they can take care of business against plenty of foes, be it home or away.

If SP is to enjoy success in the postseason, it will need to have QB Trevor Jungman at his dual-threat best while elusive running back Shawn Carter must get loose and break off some impactful runs.

As for the defense, hardnosed linebacker Johnny Vega as well as productive down linemen Ben Lee and Isai Ramos will be need to be major disruptors if the G. Eagles are to hold the Marauders in check and continue on.

Should SP get their second road win of the season, they’ll be faced with another testing foe seven days later in the form of No. 2 seed Poway.

So with the regular season in the rearview mirror, it is now the playoffs that loom dead ahead. Will any of the Esco-based schools find that groove that will help carry them deep into the postseason? Objectively speaking, all appearances suggest that each has a realistic chance to at least make a mark if not do some serious damage. It’ll be fascinating to see which team will make the most of its chance to excel when wins are at their most critical.