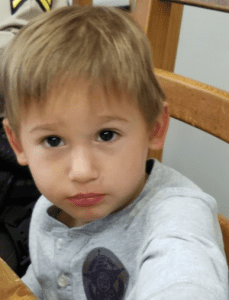 UPDATE: Connor has been re-united with his parents at approximately 6:40PM. An investigation is ongoing; however, Connor’s parents are not considered suspects.

The San Diego County Sheriff’s Department wants the public’s help in identifying a child who was found wandering inside a store in Encinitas.

Today around noon, deputies from the North Coastal Sheriff’s Station were called to the Michael’s store in the 300 block of North El Camino Real. Employees told deputies they found a young boy alone in the store. Despite making announcements over the store’s public address system, as well as searching the parking lot and surrounding businesses, employees did not find the child’s parents. The Sheriff’s ASTREA helicopter was used for public address announcements in the surrounding neighborhoods, but those too were unsuccessful in locating the boy’s family.

The young boy told deputies his name is “Connor.” He is wearing a gray long sleeved shirt, gray shorts and Navy blue shoes. He is believed to be between three and four years old and appears to be in good health. The child was taken into protective custody and has been released to the care of Child Welfare Services at the Polinsky Children’s Center. This is all the information that will be released at this time.